I received an email after my recent interview appeared on Lisa’s Random Acts of Zen; an interview in which I talked about being single and my weight. And about the relationship between the two.

Emily Jean is a health coach and works with women who are wanting to give up the dieting mindset and just trying to find some peace with food, and love for their body. I thanked her for her approach but had to flag that I really couldn’t afford to work with her on my body image issues at the moment. Fortunately she was keen to just talk to me so we had a lengthy skype chat.

Former Diet Schmiet readers would know that I’ve had A LOT of therapy re my eating disorders. Freudian psychotherapists, to CBT and those specialising in behaviour modification, a dietician/psychologist and someone who specifically focussed on peeps with disordered eating. I’ve come a long way since my anorexic youth, bulimic 20s and self-hating dieting/bingeing 30s. But… well…

Emily Jean and I talked about my perfectionist black/white thinking, and the concept of ‘worth’ and being ‘enough’ – a biggie for me which I’ve spoken about here at length. 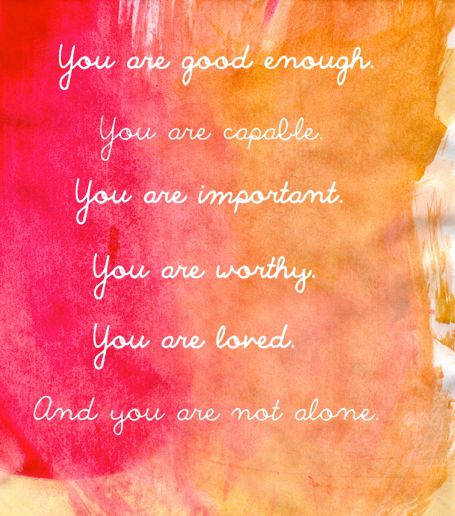 Interestingly I shared (with her obvs) some stuff which I’ve probably spoken about before, but not considered for a long time.

1. Becoming anorexic was the first time I excelled at anything. Not just becoming thin, gaining control over food and my body and stopping menstruating (etc) but I improved in my chosen sports and did a little modelling as well. I became visible.

2. While my confidence is no longer completely tied up with my body image issues, they’re still closely connected. I assume others are judging me poorly and that holds me back from doing the things I’d like to do. I realise this may not be the case, but it’s how I judge others who are very overweight: weak and pathetic (transference much?!).

3. I feel the need to apologise and make excuses for the person I’ve become. I feel guilty for taking up space. I feel I’ve let others (and myself) down. (Refer to 1)

4. I have a very strong mind / body disconnect. I find it almost impossible to describe how my body feels at any one moment. I’ve long known I’ve struggled to ‘live in the moment’ but being ‘present’ at all is problematic. After all, it’s far easier to wallow in the past or stress about the future than to deal with shit in the present.

5. Bingeing on food calms me and slows down my thinking. I’ve always thought my bingeing was about anger and shoving down feelings, but in talking to Emily Jean, I described a binge as calming – which was a surprise.

I suspect if I was a client of Emily Jean’s we’d do a lot of work on some of these new issues that came up during our conversation. However the two things that I took away from our conversation was: a new understanding of a reason why I binge; and how little I am mentally and physically ‘present’.

I’ve talked before about my busy mind and chronic insomnia as the only time all day that my mind ceases to be preoccupied with other stuff, is when I go to bed at night. Which is when I can start worrying and obsessing and planning and dreaming – which I know is a problem for many. I’ve already (re)started yoga and try to meditate a little, so think I’m on the right track.

Is the mind / body disconnect something others struggle with? Any other suggestions for being mentally AND physically present and living in the here and now?

Linking up with Essentially Jess and the IBOT team today.