I’m currently tired of overthinking so decided against an angsty post this Thursday, instead going with my own version of a check-in of sorts, sharing bits and pieces of life lately.

Binge-reading
This sounds like a fun thing, but it’s not altogether healthy for me. I only read at night and have had some commitments recently so I’ve found that on ANY free night I’ve been reading an entire book in a sitting. (So, four in four nights last weekend.)

Reading is one of my coping mechanisms, so bingeing on it (ie. a book a night) is a sign that I need to look at what’s happening in my life (the broken windows analogy) and – as my TV hasn’t been turned on for almost two weeks – time to watch some TV. 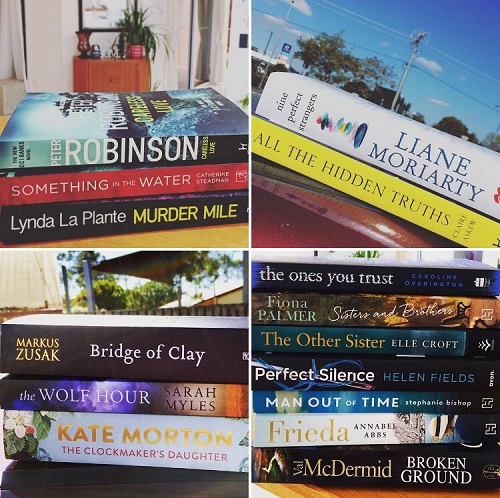 This month’s arrivals along with 4 eBooks

Pondering
Where to next professionally given that my job ends soon. I talked about this recently but my options are really starting to crystalise in my mind. There’s something I can apply for in my current workplace but I’m unsure that it’s an option I want to pursue, so I’m weighing-up (overanalysing) the money vs freedom vs values thing. #Inrelatednews, am I too old to find a sugar daddy?

Holiday prep (or lack thereof)
I’m also pondering (though not yet stressing about) the stuff I need to do before my looming holiday. I’ve already mentioned that I want to book a couple of things so I lock in plans for my first couple of days.

As I also mentioned last week, I had planned to attempt to learn a few Italian phrases but the app I downloaded isn’t really doing it for me and I think I need something more conversational.

Oh and I’m yet to choose which of my novels, if any, I pursue while I’m on the writing retreat. I had great plans of revising the three I’ve started and one I’ve contemplated to make a decision. But I haven’t even re-read them at this stage. That won’t take long with a couple of them, but one (at 50K words) is a bit more complex.

Oh and of course I’ve not even started to think about what clothes I’m taking.

Happy coincidences
I had an email from Hachette Australia listing their authors attending the Brisbane Writers’ Festival in September. When I checked the dates I realised it’s in the lead-up to my overseas holiday. I’m working on the week-days but heading to Brisbane early on the Saturday morning and have already booked into (and paid for) four sessions on Saturday and one on Sunday (before flying out Sunday night)!

What an excellent way to transition from work into my holiday!!!

Do you have coping mechanisms that seem okay to others, but are perhaps unhealthy for you?