Devoted fans with nothing better to do Regular readers will recall I’m in the midst of a (quite literal) Sea Change.

In fact I’m smack-bang in the middle of it and currently camping out at my mother’s house (my childhood home) having moved out of my old apartment, and waiting to move into my new one.

Having lived in my former place for 7.5 years I was WAY sadder than I expected to be when I drove away last week. Even now that the sale has ‘settled’ I’m wondering if the new owners are now there and how the place is looking.

I’ve already mentioned that my move (ie. desire for no mortgage and not having to work for a little while) requires a significant downsize. Note that I’m not claiming I’m slumming it. My new apartment is a bit newer than the one I’ve just left. Just much smaller. Much MUCH smaller. 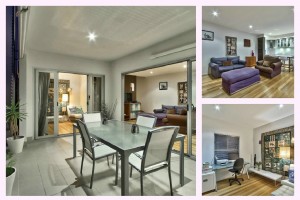 As part of the whole reinventing myself thing, I’m taking small superficial steps to make some changes. My old apartment was kinda tribal- themed for the want of a better word. Well, sort of. My furniture and furnishings were navy, chocolate brown and forest green. My walls littered with wall hangings I’d bought overseas.

I still love the look and the colours of my former life. But… it’s time for a change.

I’ll be living by the beach. My apartment is tiny. I need to create light and space. So I’m thinking pastels. Obviously this change will take some time – I need a new sofa and some other new stuff (well, linen for my bed and the sofa are my priorities) but I’ve started getting myself in the mood for what is to come.

My hometown, Maryborough, was founded in 1847. Known as ‘The Heritage City’, it prides itself on its many 19th and 20th century buildings. This history was something I didn’t appreciate when younger. It’s only when I tell people where I’m from that they comment on the old Queenslander-style houses and many old buildings that I realise I’ve taken my birthplace for granted. 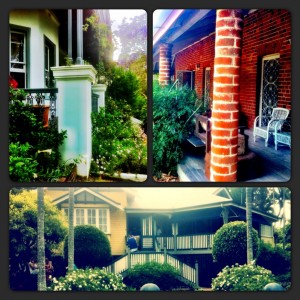 On Saturday however, I took the opportunity to change that and set out with my mother to participate in a historical Open Houses Event, which was organised by the local Council.

I’m not a great tourist, so wasn’t preparing to ‘ohh’ and ‘ahhh’ at the architecture or collectables; rather I decided to see it as an opportunity to learn from the past and seek some interior design and decorating inspiration for my own (albeit shiny) new abode.

Surprisingly I found myself quite beguiled by some of the houses we visited. Many were private residences so didn’t allow photographs to be taken inside. Of course, as you can see, the quality of my iPhone photos leaves a bit to be desired anyway!

Quite possibly the best known of the historical homes here in Maryborough is Baddow House, built in 1833. People actually live there now, so visitors only see part of the house (though many were – quite bizarrely – itching to sneak about and see more!). Because the furnishings interested me more than the architecture I was less appreciative than others, although I must confess the fireplaces, amazing ceilings and panelling were just gorgeous (I have a thing for wood panelling. And I blame Escape to the Country for that fetish!).

Because I’ve been thinking about the style of sofa I wanted I was interested to see that the country cottage style sofa (with the more traditional chaise lounges and the like) featured strongly in a number of the houses.

As an aside, I found an incredibly comfy sofa last week but don’t like the look of it. At all. I’m either into the loose-fitting-cover country style of sofa or the very modular and modern. I most definitely don’t like the cheap looking pinched leather look. Which this one was! But… it was divinely comfortable! 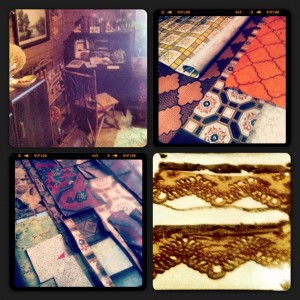 Furnishings and linen high on my agenda, I enjoyed the displays at Brennan and Geraghty’s cottage, next to the better-known Store Museum. The cottage houses The National Trust Interiors Resource Centre Collection and even I was impressed at the meticulously kept samples of lace and other fabrics, along with the slightly-hysterical linoleum collection which someone else commented could have come from their own 1970s childhood home!

One of the houses, Mavis Bank, had an inordinate array of old household appliances and I chuckled at the washing machine, having just advertised my own 3mth old machine on eBay to sell. Never again will I complain about having to push a few buttons to do a load of laundry. 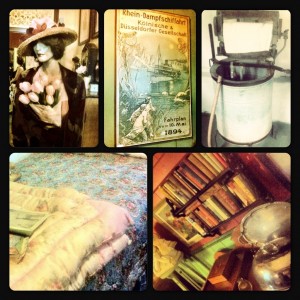 It, and some of the other houses however featured a lot of the traditional furnishings which offered some much-needed inspiration.

I’ve been mulling for a little while about a softer look for my bedroom. I’d already added some pink to my browns, but have been eyeing off pastels and patchwork. I’m envisaging clean white crisp sheets and with an splash of pale colours in the form of a quilt. Not a doona. Naturally I don’t want to get too carried away as I’m not too much of a girly girl. (Actually I’m not a girly girl at all – I really only wear black unless I’m in workout gear! But I’m trying to change that!)

Florals, rich embroidered materials and pastel tones featured strongly in the houses we visited, making me more certain that this is a direction I’m keen to follow. 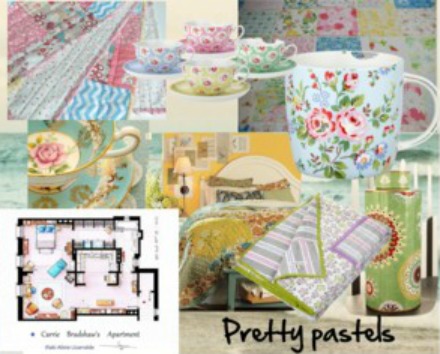 I’ve never been much of a ‘joiner’. Even now my mother has asked if I’ll attend local meetings of various groups and I cringe at the idea. However… now that I’m a smaller (and new) locale, I know that I do need to make an effort to become part of a community.

The Open House Event killed several birds for me: it got me out and about in the community; gave me more of an appreciation for my own heritage; and offered some perfectly-timed inspiration for my new apartment. Surprising really and most certainly worth the effort!

Have you found interior design or decorating inspiration in unusual places?