Some desperately sad photographs have been doing the rounds over recent days. They were actually taken near where I live and were so heart-wrenching that the images were picked up by media outlets around the world.

The pictures feature a male kangaroo seemingly cradling the head of a dying female who’s reaching for her joey. 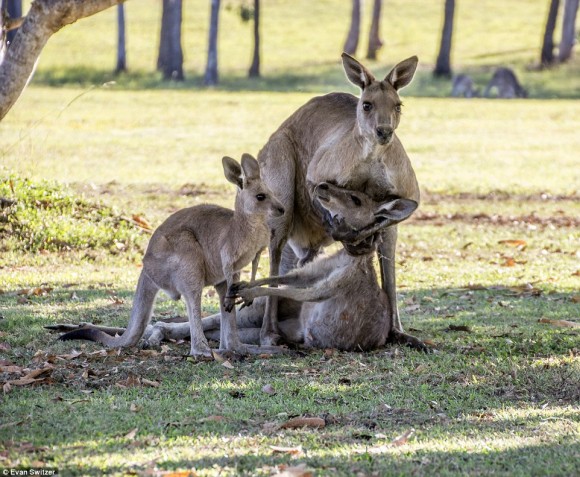 Tears were shed and everyone was moved by this sad display of love and devotion.

Experts came forth and said it was most likely that the male kangaroo was in fact trying to prop the dying female up to have his way with her.

I understand the importance of getting the facts straight but at the same time cannot help but think they could have let sleeping *ahem* dogs lie. #sorry

I mean, did we REALLY need to know about the near-necrophilic act? Surely it was better when we were all overcome with grief. And the warm and fuzzies.

God, next we’ll be told that all those cute cat videos are staged… or that reality shows featuring rich housewives are scripted!

Like I said, it’s hard to blame them… the scientifically-inclined who value truth and veracity (and yes, I know they’re the same thing, but I’m making  a point!) above all else. However it’s an unfortunate reminder that sometimes we need to think twice before bursting someone’s bubble or doing something akin to telling kids there’s no Santa or Tooth Fairy.

It may well be human nature. I know there have been times when I just couldn’t let something rest. Times when I’ve ‘won’ but felt the need to go for the kill anyway; or times when I’ve had the upper hand and could have (but didn’t) yield—allowing someone else’s journey to be slightly more manageable.

The images of the dying kangaroo are no less sad, but now that someone’s shown me what’s behind the curtain it’s not quite as touching.

Would you prefer NOT to have know what the male kangaroo had in mind?

Flogging my blog With Some Grace.