A lot of bloggers have been doing the ‘What’s in my handbag?’ thing. And because I had nothing else planned for today I decided to play along. Plus, what’s in my bag compared to everyone else’s is kinda surprising. Less is obviously more in my world. (Well that and I don’t have kids!) 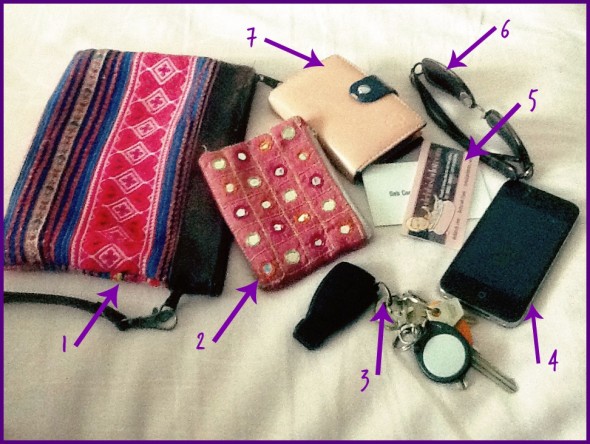 Such as it is. I’ve had this seriously cute bag (thingy) for three or four years now. I’ve always been a ‘small bag’ person, although I used to prefer those with long straps to sling across my body so I could forget about it. This cutie did (at some point) have some fabulous little pompoms attached to the clip near the strap but they’re in hiding. #somewhere

When I first got this bag I had a coin purse and a little cane thing from Africa for my notes. But that didn’t work – as I had to open two bloody things any time I wanted to pay for something… So the cane thing now lives in a desk drawer filled with business cards and my coin purse holds all of my cash. I’m not even sure where I got it but I’d had it for years (unused) when I rediscovered it.

Car, home, work and PO box keys and garage door fob thingy. I actually unclip my house house keys from my car keys most of the time and just attach the car key (ie. the big back thing) to the clip on the outside of my bag – which is very handy (and obvs not just for pompoms).

My old iPhone 4 which had 8mths of respite after diving into my bathtub early last year. Despite doing the rice thing it failed to work, and I was too poor to replace it, so used a crappy cheap Samsung thing. However… I checked it late last year and it actually started working again. Of course, a week later I dropped it and cracked its screen.

My blog’s and my workplace’s. Unfortunately the back of my Debbish cards still have my Diet Schmiet details, but until I get rid of what I’ve got I’m loath to buy more. Plus they’re cute. 🙂

I mentioned these recently in my Girls Who Wear Glasses post – one of two (pairs) for $200 in total from Specsavers!

This ‘seems’ like a very good idea and indeed my bank cards, medicare card, store cards, drivers licence etc are all in here. Except… those I pull out all of the time (banking cards and grocery shopping awards card) just get stuck in loosely as I’m too lazy to put them back in the plastic sleeve each time.

So there you have it: my bag, and its contents. Sometimes there’ll be a receipt or two or a hairband in there as well and very occasionally a lipstick, but it fits little else. Which – of course – is the entire point of having something so small. I just wish I could find those pompoms!

So, what’s in your bag? More than mine?