I thought I’d continue with a couple of themes I’ve raised recently on the blog.

I almost ventured onto this topic when I wrote about adulting… and the fact that – at 48yrs of age – I tend to look around for the adult in the room when things get too complicated.

And then there was last week’s post about failure.

Late last year I read an online article in the Huffington Post that could have been written about me. And that’s why we all love the interwebz isn’t it? We discover we’re not alone and not the freaks we assume ourselves to be.

The article was about the fact that many of us feel inadequate. We feel as if we don’t belong. It’s not just a self esteem issue or one of confidence. We feel like frauds; and living with the stress of others discovering this secret can be debilitating. It can mean we don’t try. At all. Ever. Often as a result of crippling anxiety.

It’s called the Imposter Syndrome – coined in 1978 after a study involving 150 successful women found many did not experience internal feelings of success, instead putting their achievements down to good fortune. The study found they didn’t believe they DESERVED their success and believed it was only a matter of time before their inadequacies were discovered. 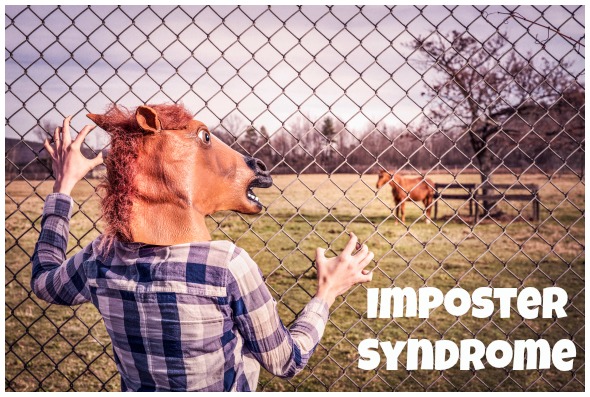 It seems risk aversion and a fear of being our authentic selves is something commonly experienced by those struggling with imposter syndrome.

Now… I’m not saying I’m a highly successful woman. Indeed – I’m not and never have been. But I’ve had some pretty good opportunities. Many of which I put down to luck. Or being in the right place or right time. Or ‘playing the game’ to get what I wanted.

I’ve often experienced self-doubt and have previously written (a lot) about the fact I struggle with my sense of ‘worth’ and and the feeling of not-belonging.

One of my fave bloggers, Carla Birnberg, wrote about impostor syndrome just after I’d seen this article. Carla talked (in particular) about the fact we feel like frauds when things come easily to us (motherhood and writing were her examples). We shrug them off instead of acknowledging their value to the world.

I recently had something which was / could be akin to an anxiety or panic attack. I ‘suffer’ from other weird and wonderful ailments, including an overindulgence in sarcasm – but not anxiety. However… I was reminded that I often felt ‘overcome’ when I was at University.

I never really felt like I belonged there. I could occasionally ‘hide’ in a large lecture theatre and cope with the feeling of dread in the pit of my stomach and the sense of claustrophobia which overcame me… But attending tutorials – with a small group smart people who deserved to be there – was just not something I could do. (And yes, it’s a wonder I eventually got my degrees!)

Author and life coach, Karen Anderson recently shared a dream she had of her own college and graduation experience and her battle with imposter syndrome. I could very much relate to those feelings of not being ‘enough’. Of not belonging. And of being a fraud. 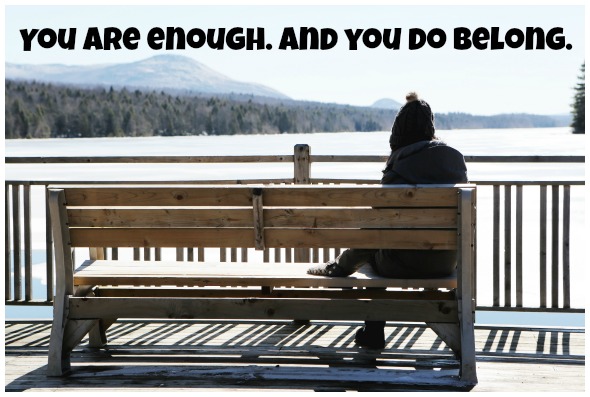 Karen talks about the impact that trying to hide our feelings of inadequacy can have on us. And she reminds us that feelings or emotions are not proof. Just because we feel ‘unworthy’ doesn’t mean we are.

Carla suggests we stop comparing ourselves to others. And yes… that comparison trap is really a bitch. She also monitored her self-talk and stopped with (what she calls) the ‘onlys’. Most of us deflect compliments from others, but not allowing ourselves to feel a sense of success or accomplishment can mean we have very little to celebrate in our lives.

The Huff Post piece suggests we start by admitting how we’re feeling. I’ve always regretted not having a life partner at times like this as I tend to think of partners as those who see your faults and accept you anyway. I feel like I share A LOT with my girlfriends, but often draw the line at things which will make me look weak. Or bad. I know they see and know my faults, but unless I can laugh about them… I don’t want to go there.

Being closer in proximity to my mother helps. I know I can share the most shameful things with her and she won’t (hopefully!) think any worse of me.

I’m still kinda working out what I do and where I go next. My biggest concern is that I don’t follow my dreams because I’m too paralysed by fear. Fear of failure, AND fear of not really being who or what I say I am.

But more on that another time…

Have you ever suffered from imposter syndrome?

PS. I should note I’ve gone with the Australian spelling of imposter. Rather than impostor. In case you were wondering!

Free images (with my text) via Gratisotography.