I’ve heard this before and just read an article in the latest Coeliac Australia magazine about the very issue.

As I understand it (and I’m no expert), it’s actually quite simple. One is coeliac (ie. allergic to gluten) or not. Coeliacs’ reactions to accidentally ingesting gluten can vary. Even I have very different reactions which defy logic. Regular readers may recall a slightly destructive period earlier this year where I PURPOSELY ate normal potato crisps while I was in binge-eating mode. I had no reaction. At other times I can eat bacon which is faithfully promised to be gluten-free, but be on the toilet almost immediately after leaving the cafe.

My last endoscopy actually showed that the villi in my stomach which should have been ‘mended’ or improved after 5 or 6 years on a gluten-free diet, were – in fact – not. Some extra tests were done and the conclusion was that I am actually eating gluten without realising it. I had to confess I’d been lax. Not – at that point – eating it on purpose… but it was a long time since I’d checked that my favourite Chinese takeaway STILL used potato starch to thicken their sauces. I occasionally ‘chanced’ hot chips when dining out cos I wanted to eat them and preferred to do so rather than ask if they were gluten-free.

I’ve never experienced that ‘magically feeling better’ sensation many diagnosed coeliacs mention. Even when first diagnosed when I swore off takeaway food and only ate boring bland food day after day at home.

I realise, of course, that I’m lucky to be a coeliac in this day and age. The array of foods and alternatives available to me are remarkable. I cannot imagine what it was like 10, 20 or more years ago. Nowadays parents can offer their coeliac kids foods that mimic those enjoyed by their peers and you can go to almost any restaurant or cafe and find menus marked accordingly.

And this is where I wade into shark-infested waters. 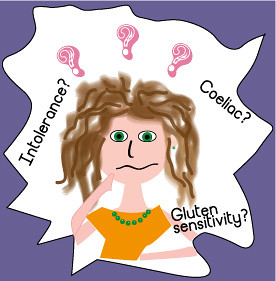 It’s great that non-coeliacs (ie. those not diagnosed by biopsy) are health-conscious enough to cut gluten or wheat out of their diets. Indeed I know of many people who’ve had reduced symptoms of bloating and irritable bowel syndrome after reducing the amount of wheat or gluten in their diet.

I have no beef with anyone deciding to quit sugar or meat or white foods (or things shaped like the brain) and so forth. But I have to admit, people who just ‘cut back on their wheat consumption’ can make life a little harder for diagnosed coeliacs.

Non-coeliacs have no need to be as diligent as those of us actually allergic to gluten. Indeed, I know of many people who just cut-out or reduce their consumption of cakes, biscuits and bread – and talk of having a gluten-free diet.

I’ve been in a cafe when a waiter has adamantly informed me that someone else who didn’t eat wheat ate the risotto (ie. so what was my problem?!).

I’ve been asked “How coeliac are you?” When what I think they meant is… are you actually allergic or are you just reducing your intake (although I do realise it’s none of their business, the customer always being right etc). Alternatively I’ll get the, “So, you don’t eat wheat?” comment.

In the meantime, Coeliac Australia (and I’m sure its counterparts in other countries) and nutritionists are doing their best to educate the food and restaurant industry about gluten and other allergies.

I don’t mean to imply that we coeliacs have it worse than others suffering an intolerance. Of course I realise that non-coeliacs who have completely eradicated gluten from their diet will also suffer similar consequences from the ingestion of gluten (I tell my friends it’s a bit like food poisoning); but… sometimes the language can be important.

I’m sure I sound precious or pedantic (and I do feel like I’m being a bitch) but just cutting back on wheat is not the same as being coeliac and it’s helpful to distinguish that sometimes.

Am I being a bit precious (or even a bitch)?
Do you cut wheat, gluten or other products out of your diet?
Or perhaps you have a food allergy of your own?