During my ‘blog every day’ challenge in April I used a variety of prompts, including the alphabet. And B was a no-brainer because Boaty McBoatface was making the news and making my week.

In that earlier post I commented that – the idea itself and the support it garnered… via social media AND NERC and some of its staff) – gave me hope for humanity. We weren’t as precious or without humour as I’d worried we’d become. We could still take the piss out of ourselves and have a laugh.

Of course it should come as no surprise that the polar research ship isn’t going to be called Boaty McBoatface – which I still cannot say or type without smiling – despite the incredible support the name received. And the SSSS….RRRRR…SSSS  Sir David Attenborough (or similar) is a worthy successor. To Boaty.

Of course, all is not lost in the case of Boaty McBoatface, because #this: 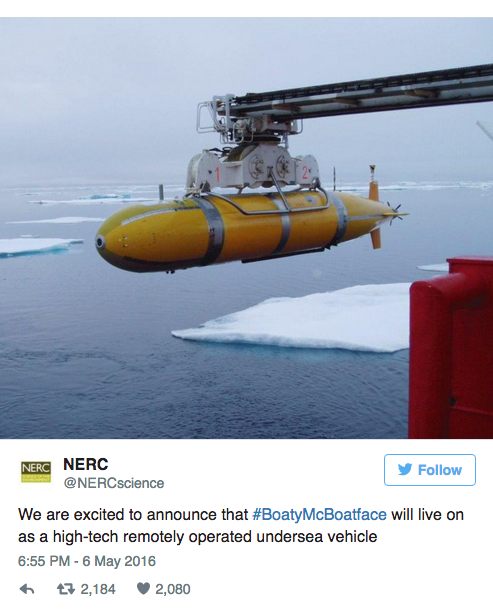 Boaty will live on. Literally ON SSRRSSS Sir David Attenborough.

I’ve been thinking about this as I’ve been watching police services around the world challenge each other in a dance-off of sorts.

NZ Police kicked things off and offered a Running Man challenge to other police services with this spectacular car park sequence….

And now it’s gone off and the New South Wales, Northern Territory, Scottish and Finnish police services as well as the Metropolitan (Met) police in London and NYPD seem to have gotten in on the act.

I was surprised though to see a couple of negative comments on a Facebook feed. About police needing to be more respectful and upstanding. Or something.

A police officer I know gets frustrated that – from a young age – we’re told the police are something to be feared. Sure, if you’re a serial rapist or drug dealer or pickpocket, that’s probably the case. But they’re also there to help and (believe it or not) they’re also human. So isn’t it nice to see the human face of policing every so often? A reminder it’s not all about excessive force or being seen as the fun police ruling over a nanny state.

The police service of my own State are renowned for their impressive social media presence. Their Facebook account manages to balance the serious and important with the hilariously funny.

I’m pretty sure we’ve WON the dance-off with the offering below. (And as for the dropped mic / CD reference at the end I should mention there’s a running joke about Nickelback and the band’s ‘music’.)

I have to admit some of the dance moves and videos are a tad naff, but they’re fun. Most importantly they’re humanising coppers AND possibly even building bridges and relationships around the world.

Do dancing police and the existence of Boaty McBoatface give you hope for humanity?
Where do you stand on police frivolity?