I’ve been hanging out at my mother’s recently. Ostensibly I’ve helped clear her back room a little (as she’s had termites), but I escape here every so often to have some company AND when it’s holiday time in my apartment complex by the beach and it’s overrun with kids playing Marco Polo. And similar.

But lately I’ve extended my visits a little. Cos I’ve not wanted to go home. Indeed… I’ve just spent two long weekends at my mother’s, only returning for the days I’ve had to go to work. In fact, I’ve had to head back to my place today. But I didn’t want to.

And it’s worrying me…. the ‘forgetting to go home on purpose’ thing.

I live in a complex of about 17 units. Just over half are owner-occupied and the others are short and long term rentals.

Regular readers know my place is right on the beach and I have amazing views. My apartment is still pretty new and has everything I could need. Our complex has a nice pool and is generally well-kept. 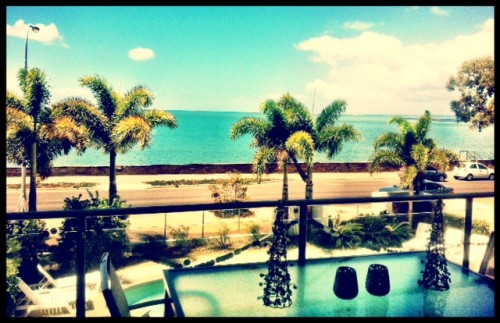 However… there are issues. I mentioned in my check-in post yesterday that we’ve had some issues between owners  – well, with one in particular (who also has a caretaking role), whose behaviour and attitude is such that I really just don’t want to be there. At all.

So here’s my dilemma… 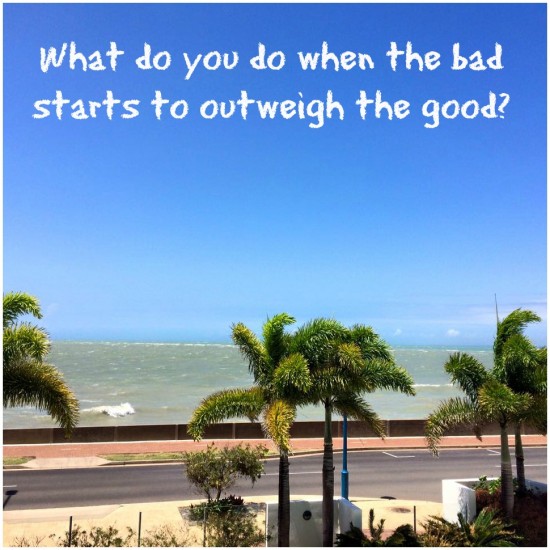 I’ve started looking at other properties. I think I’d like a house this time around but I most definitely could not afford a house on the esplanade (where I currently am) unless I was prepared to take out a hefty mortgage and get a real job.

Even the kinds of houses I like would require a mortgage… which means a commitment to working.

The whole idea of my seachange (in my early – mid 40s) was to rid myself of debt and commitments. I’ve finally got a (part-time) job that should ultimately allow me to dine out without feeling guilty and – perhaps – at some point… have a holiday.

There are a couple of places I’ve seen which wouldn’t require a significant mortgage… places that are similarly priced to mine. But I don’t feel particularly passionate about any I’ve seen. And part of me hates the idea I’ve been driven out of my apartment by someone who’s problematic. (And could ideally get hit by a bus tomorrow!)

So… although this is a very first world problem and I really have no right to complain about this dilemma, it’s playing on my mind nonetheless. Home no longer feels like home.

Have you ever gotten to the point you’ve hated a place you’ve lived in? Or perhaps a job you’ve been in?
Should I stay or should I go?