I know it’s ridiculous to be fantasising about having a holiday when I’m not working anyway, but it has to be said; being unemployed and actively looking for work (and stressing about the lack of it and its impact on one’s finances) is very different from being on holidays. Or even being retired.

My mother (who’s retired) often (seemingly) guiltily confesses to a daytime nap. “You’re retired!” I tell her. “You’re allowed to do whatever the hell you want!”

It’s different though when guilt and stress are gnawing away at your insides.

However… I have something up my sleeve I’ve been saving for a rainy day. Well, in all honesty I’ve been procrastinating and waiting to see if I got a job in the meantime, but the clock’s a’ ticking.

Last year when I was booking my Italy holiday I cashed in some credit card awards points for a gift card at a travel agency here in Australia (Flight Centre). I’d planned to book part of that holiday through a friend’s friend at the Flight Centre and figured that would save me some cash. However, in the end that didn’t happen. So… I have had – in my hot little… umm… drawer – a $1000 Gift Card to use. By 1 September this year.

Of course I realise I should be sensible and put out feelers to see if someone wants to buy it from me (as it’s a generic gift card). That money would pay my quarterly local government rates (currently due) or part of my home and contents insurance (soon to be due).

However, there’s been a frivolous part of me that’s wanted to keep it on hand to use, well… frivolously. On me!

So for all of my moaning and groaning about my finances I’m almost sure (ie. pretty certain) I’m going to blow it on a holiday. (A short one obviously!)

I’ve been pondering two options. There’s a crime writing festival just outside of Hobart in late October, early November. It looks great and though I’d love to see some of Tasmania, the two day festival is not cheap and I must admit it’s the workshops and masterclasses the two preceding days (at extra costs) that interest me more. Also, it’s in a remote-ish area so although my gift card SHOULD have money left on it after the flights, I probably wouldn’t be able to use it for the accommodation. That would be an extra cost, as would the writing festival itself. (Not to mention I’ll need to check I can use the gift card for costs AFTER its expiry date.)

I keep checking out the Flight Centre site for options. Within my price range – flights and accommodation options include various places in Australia. And though I wouldn’t mind going to Kangaroo Island, for eg… that seems a bit meh. And going to a beachside locale seems pointless when I live at one.

Then there are the usual nearby overseas suspects: Phuket or Bali, or even Hawaii. More alluring to some as we’re in the midst of winter here. But again…. tourists, beaches. Meh. Vietnam is on offer along with Cambodia. I’ve seen quite a lot of the latter as I lived there for 7mths in 1997 (and visited again in 1998). I’ve only been to the south of Vietnam (again, two decades ago!), but must confess I’m in the mood for something ‘easier’.

So… at this stage the frontrunner is Queenstown in New Zealand. I’ve been there once before with a friend. We attempted to ski. I hated it. I wouldn’t even bother with the skiing option this time around. I’ve had two friends visit recently and been drooling over author Jacqueline Harvey’s Instagram feed for some time. 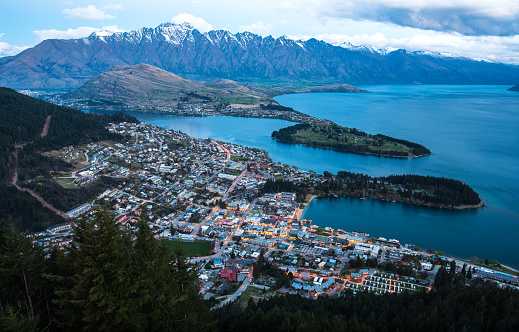 I’ve realised my idea of a holiday is ACCEPTING I DON’T HAVE TO BE DOING ANYTHING ELSE. Not sightseeing and catching connecting trains and the like.

In all honesty my dream holiday involves lolling around a hotel overlooking a gorgeous vista, drinking red wine. Warm and snuggly near a fire. Perhaps I’m reading. Or perhaps I’m wandering around the town a little. Finding places to eat where I don’t feel weird solo. Just being (far) removed – albeit briefly – from life here.

Any other suggestions I might not have considered? Or any recommendations if I go with the Queenstown option?

Linking up with the Lovin’ Life gang again.