I’ve been a misery guts for a while. Although, having said that, this could (in fact) be who I am now as I think it’s gone on for a few years… but I mean (even) more (so) of late.

I injured my back over two months ago and it wasn’t until this past week that I could get out of bed without levering myself in some weird slingshot type way lest I keel over in pain.

And then, I got an ear infection. Given I recently had my first cold sore in years I’d say it’s a reminder that my immune system is a tad fucked.

As someone on social media put it, an ear infection can cause a disproportionally large amount of duress on one’s life. Thankfully I saw a doctor fairly early so though it was already infected, it’s able to be treated by drops and antibiotics. Unlike those in the past which involved same-day urgent trips to the ENT specialist in a neighbouring town.

Anyhoo, my back and ear are finally on the mend. I hope. So it was timely yesterday to wake to see this. 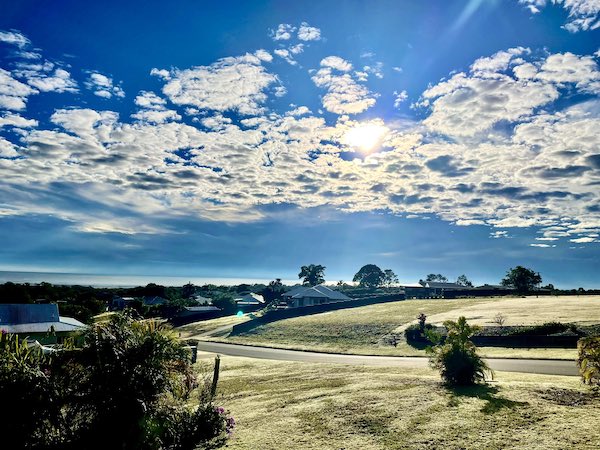 It’s been raining for just over a week here and though the rain is most welcome and I’m usually a fan, it seemingly had a directly proportional relationship to my mood. So… when I saw the sun yesterday and the blood that dripped out of my ear canal Saturday had stopped, I figured all was (or is) right with the world.

Of course you and I realise this will be momentary, but still… for a change I’m living in the moment.

Last week I’d written a ‘life lately’ post but couldn’t be arsed finishing it, such was my malaise. Even though it was practically complete. Now that my mood is jollier I figure I’d share some of that here – lest you miss out on the excitement-that-is-my-life.

I started a temp job 2 weeks ago. It’s only for 4-5 weeks but great to get me out of the house as I’d fallen into a bit of a hermit-like slump. The people I work with are nice and the job is straight forward but very busy so there’s no slacking off which makes the day fly past.

It also means I’m feeling a bit healthier as I’d gotten into a grazing habit at home. I’ve started seeing a therapist and dietician and the latter explains that binge eaters (such as moi) who’ve had weight-loss surgery tend to take to grazing because they can’t eat the amount they did before to satisfy them. (And when I say that I mean unmet needs that we plug with food. Obvs!)

The full time day job which involves very few breaks from my computer (well, none) means I’ve not wanted to be at one at home so my writing and reviewing (and therefore my reading) have decreased. Instead my nights have been filled with A LOT of television. Well, streaming services I guess. I’ve been watching everything from Ted Lasso to Lucifer to Starstruck but they probably deserve their own blog post so more on that another time.

I got my second Pfizer jab just over a week ago so am fully vaccinated. I know that means I can still get and carry Covid, but understand that – if I succumb – my symptoms should be less severe.

I recently got my final marks back from this trimester at Uni and happy to have another High Distinction. It’s weird to be a conscientious student. As an undergraduate I was hopeless and when I did my MBA shortly after, in the mid-late 1990s, I was only just coming to terms with the fact you only needed to understand things, not know everything by heart (which was my high school way of studying). 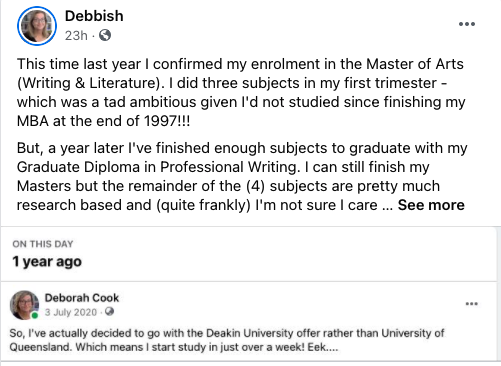 I must confess I’m going to miss study. Not the anxiety it caused but the challenge and validation it provided.

So, there you have it. Surprisingly upbeat. How’s life lately in your patch of the world?

Linking up with Denyse for Life This Week.