I asked a favour of a friend yesterday. It was something I was nervous about but when I finally asked the question (if she would help move my desk into my bedroom) she laughed. “That’s not a big favour!” she said. (Having said that we actually got sidetracked and didn’t follow through!) 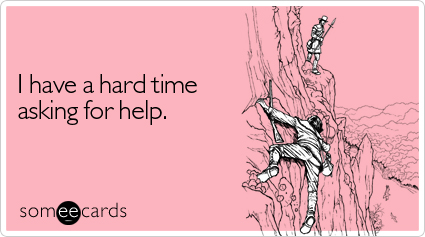 I’m not good at asking for help or favours. In fact, I’m bloody terrible at it. I just don’t like it.

It’s not that I see it as some sort of weakness. Rather I just hate making others feel obliged or put-upon and I hate that feeling of being indebted to them.

I have an uncle (and aunt) who reside in my new hometown. Uncle D is particularly ‘handy’. And he’s one of those types who loves to potter. Although 70, he still prefers to be tinkering with things rather than kicking back and resting. (And yes, before you ask, we ARE only related by marriage!)

When I moved into my new apartment my mother kept identifying things which my uncle could ‘help’ me with: nails in the walls and so forth.

I know from my cousin that Uncle D has installed irrigation systems and done all sorts of things for them. “He loves it,” he and his wife tell me. But… I cannot bring myself to ask for his help.

I’m about to make some changes to my minute laundry area and when I casually mentioned in passing that I was going to get a handyman to help he was horrified. Like, really… not just feigned as I would do/be. “Oh, I’m too late to help you paint your entire house? I feel terrible.” (While dancing a relieved jig!)

Uncle D’s not like that. In fact, I suspect he’d be insulted if I sought alternative help. Given my lack of income, free assistance is far preferable, and yet… I’m still struggling with the idea of my very-lovely uncle doing this work for me. For free. Just cos I asked.

A couple of years ago I stayed in their lovely beachside house for almost 2 weeks. A free holiday. I was grateful. To show my appreciation I got them some gift vouchers from a large hardware store (my Uncle’s fave hangout, while my aunt loves their gardening things!). I thought cash was a bit tasteless, but also gave them some champagne. They were seriously mortified. “You’re family!” my aunt said, commenting that it was also nice to have someone housesit. (Fortunately knowing I HATE the hardware store in question, they returned the cash to me, not the gift cards! In fact, they probably just appreciated the trauma I underwent from having to VENTURE into this hardware store to get the gift cards!)

Years and years ago I asked my best friend to help me move my desk (yes the same bloody desk!) down a set of stairs. I still remember the occasion. She agreed with no qualms, but the fact that I still remember such a small thing years later says something.

I’ve had day surgery two-years in a row. The endoscopies themselves aren’t a big deal, but I’m ‘supposed’ to have someone with me afterward. And yet, I’ve never asked anyone. I take taxis to and from the hospital and glaze over the fact that no one will be with me when I reach home. 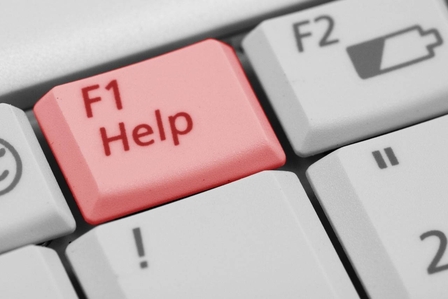 My father was very much the same. I still remember rolling my eyes when he chastised me for not approaching my university lecturers or tutors to ask questions or seek assistance.

It. Just. Wasn’t. Something. I. Would. Do. (And yes, that HAS changed and I’m far more attention-seeking than I was in my University days when NONE of my lecturers or tutors would have recognised me from a bar of soap. Back then I tried to fly under the radar!)

Anyhoo, it makes me wonder more about my inability / unwillingness to ask for help. Like I said, I’m not such a control freak that I believe asking someone to help move a desk or chop the top off a cabinet is a ‘weakness’.

It could be the fear of rejection I guess, although I’m sure I’d be okay if I asked for a favour and someone said no. Although if I thought that was likely I probably wouldn’t ask / put them in that position in the first place. Like I said, I hate to make someone feel ‘obliged’. So, perhaps (people-pleaser that I am) it’s just that I hate putting people ‘out’.

Or is it that I hate ‘owing’ people or being indebted?

Who knows… but it’s something I need to work on.

Are you able to ask for help?
Do you ask favours of others? Easily?