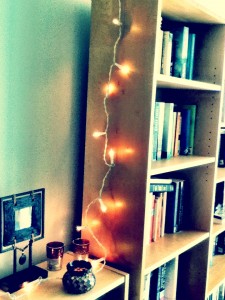 I have another first world problem for which I need advice. Which reminds me, you’ll be pleased to know I’ve sorted the fairy lights. Well, temporarily. I’m not entirely sure I’m happy with their location, draped over my bookshelves, but at least they’re somewhere other than in the cupboard!

But, back to other important matters before us.

Long time readers will recall that the whole point of growing my hair (which has taken about 18mths) was to get a style like the chick from Alcatraz. (Pic in previous post in case you don’t know how I mean!)

I’ve now actually passed that length. As it’s grown it’s become inexplicably wavy and fairly messy. Which I actually like. I HATE overly straightened hair – with pointy ends… hate hate hate it! Indeed, I almost leap out of the chair at the salon when my hairdresser tries to ‘thin’ out my ends. “Blunt cuts!” I tell them.

Anyhoo, I’ve refrained from getting a cut for months and months now. But it occurs to me that the layers have grown out sufficiently that I could do the Alcatraz haircut, if I so desired. Which – of course – was the whole point of this ‘growing-my-hair’ malarkey.

However… I can almost put all of my hair up in a ponytail thereby getting it off my head – which will be great in summer. The flipside of that is that I never wear it out – it’s always up which kinda defeats the purpose of having long hair. I also seriously sweat (on my head – can’t wear makeup etc) so more often than not, my hair is wet. 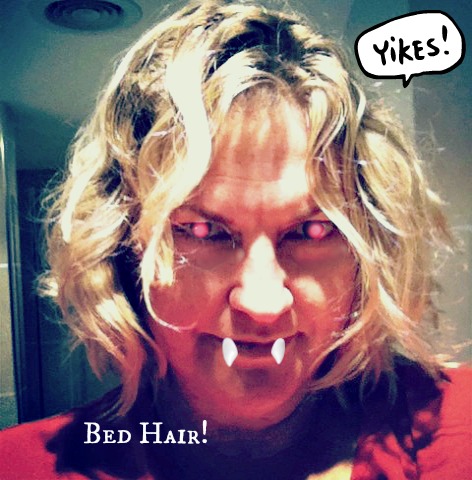 Sometimes – just before bed or when rising (like the attractive pic above!) – when my hair is ‘out’ I vainly decided that I don’t mind it too much. It tends to fall into a middle part, which I think looks okay – although I’m reminded of my lovely Brisbane hairdresser having an apoplectic fit when I asked about parting it in the middle. “You will not part your hair in the middle!” she said in the same voice she used when I asked if they did perms. I wondered later if the ‘no-middle-part’ thing was about my fat face, or whether middle parts were just a bit tragic on anyone over 20.

But, back to my dilemma, I have a hair appointment coming up and my choices are thus:

1. Leave my hair long – part it in the middle or side (which doesn’t matter as it’s never out!)
2. Go for the Alcatraz girl cut – and not worry about what it will look like sweaty!
3. Chop it all off again – which was easy to manage and fine when sweaty, but as I’ve gained weight may look blah cos of my fat face.

See what I mean?! Terrible TERRIBLE choices before me. It’s just like having to resolve the Obamacare and US national debt issue. But different.

So, again I’m opening the floor for suggestions.