A week ago I wrote about my struggle as an unemployed person. And no… I wasn’t writing about the fact that I was on the fringe of society, living below the poverty line never knowing where my next crumb of stale bread was coming from.

No… rather, I’d just finished up my job with government after about 14 years (well, this time around!) and was grappling with being not-employed.

You have probably gleaned that – after my initial shock – I wasn’t altogether unhappy about the redundancy offer as it’s forcing me to make some changes I wouldn’t otherwise have made. Unlike many I did (sort of) have an option in the end, but decided to leap willingly into the abyss hoping confident that  everything would turn out okay in the end.

Although I’ve always suspected I seem flighty and frivolous to others (although apparently that’s not actually the case!) I’m incredibly risk-averse. As I mentioned in my earlier post(s), I’ve made a lot of life-changes, but I always had a plan. Well, that and plus I was younger… one bounces back better when one has more recovery time.

I had my plan – which I am still (mostly) hopeful will come to pass, but over the past week I’ve found that – rather than kick back and enjoy my non-working life – I’ve struggled to check things off my ‘To-Do’ list, lest I feel a big fat failure.

Comments on my last post were very understanding. Those who’d previously given up work agreed that it’s hard not to feel guilty about doing ‘nothing’.

Despite generally being a slacker I’m actually about half-way through my ‘To-Do’ list. I’ve done heaps of little tasks, including: updating my CV and submitting it to a local Council citing my interest in casual administration work next year; tracing my lost superannuation; putting some furniture on eBay; completing a heap of stuff relating to the sale of my property; and I’ve had a myriad of overdue appointments.

In the past week alone the first contract on my apartment fell through, I accepted another one and am in the midst of going through the processes yet again.  And I’ve continued to get out of the house at a moment’s notice so various inspections can take place. Not to mention the usual… groceries, cleaning, washing, blogging, blog reading, exercising and so forth.

A few people I know who also received redundancies are taking a break before they do anything else.  That sounds kinda nice. 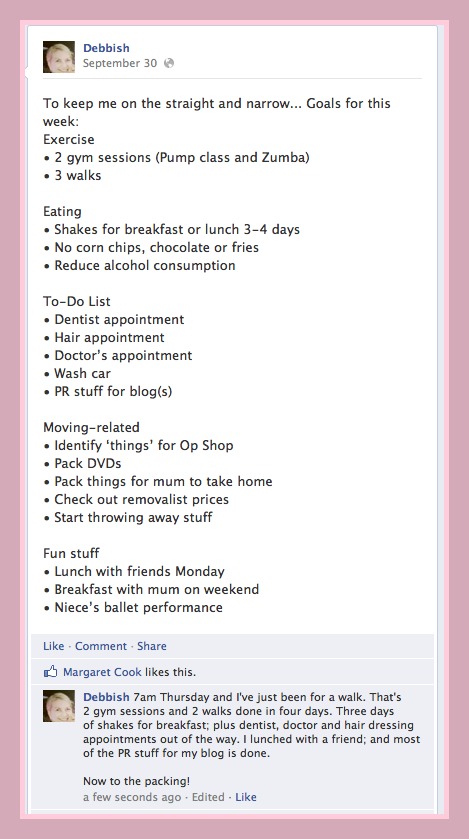 I think I still feel like I’m just on holidays and my ‘time-off’ has an expiry date – that soon I’ll run out of time to do the stuff I need to do. Although I’ve had a couple of lovely lunches with girlfriends, spending too much time doing nothing leaves me feeling guilty. And worried. It gives me too much time to wonder if I’m doing the right thing.

I told someone the other day that I feel ‘guilty’ that I have this opportunity; that somehow it’s undeserved. The problem is, I said, I also feel guilty for making the choices I am – moving and taking a break to pursue the life I want to lead – rather than doing what’s expected and continuing in the same vein I have for the past 15-20 years.

But back to my ‘To-Do’ list and the here and now; and what I’ve also realised is that… I’m on a roll. If my current contract goes through I have to be out of my apartment in less than a month – packed and ready to go in three weeks. I might as well keep going and then fall in a big heap after that.

What I’ve realised, you see, is that the next phase of my life hasn’t started yet. It doesn’t begin until I leave here and start afresh.

So, for now… I’m still tying up loose ends and finishing up my old life.

The plans I have for… the New (and Improved) Me don’t start until my new life begins.

Does that make sense?