It’s my own fault really. I knew what I was getting into but thought I could handle it. And I did. At first. But now… Well, someone may need to die.

When I decided to make my seachange I knew that living in a gorgeous apartment building by the ocean would have its downsides. Happily my complex has a good mix of owner/occupied apartments / long-term tenants and holiday rentals. It’s also smaller than the other couple of more upmarket ones so it’s not like there’s hundreds of units. Just 17 in fact, only 7 of which are holiday lets.

I’m not the most tolerant of people so (when moving) I worried about how I would cope with smoking neighbours or noisy families or drunk party animals. But… on the whole there have only been a few blips and it’s mostly been okay.

However, though initially the sounds of children frolicking by the pool was kinda nice and I loved the excited hubbub of new arrivals – eager to start their holiday – I’m thinking that I might need to make myself scarce next Christmas cos this year I’m a bit over it all.

It occurs to me that many of the holidaymakers who are here probably don’t realise that this is ‘home’ to some people, and that there are many living here who go to work each day and so forth. Indeed in the past I’ve stayed in complexes or resorts I’ve pretty much assumed to be full of holiday-makers… so only realise now that may have not been the case. Perhaps there were long-suffering owners or residents locked in their apartments hiding from we pissy chicks talking about men and sex by the pool. Loudly.

Anyone who follows my local Twitter account will have seen a myriad of tweets lately about #TheSquealer. Indeed… my life is being made a misery by a 2yr old toddler and her family who unfortunately are here for TWO BLOODY WEEKS.*

My apartment is right above the pool so it’s probably the place where any visitors can annoy me the most. On rare occasions we’ve had loud holidaymakers (and just last week two young couples who were trying to somersault into the pool after drinking one night!) but they come and go. The rentals aren’t cheap so it’s rare we get anyone TOO feral! 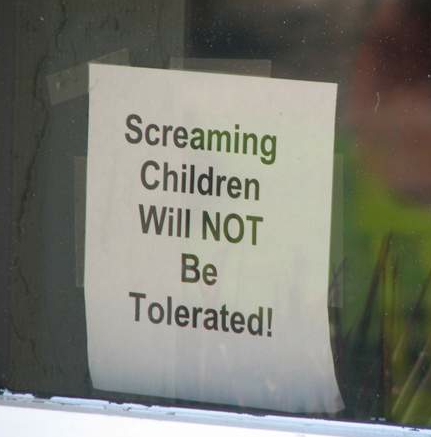 #TheSquealer, however, seems to ONLY be capable of squealing (shrill high-pitched screeches) or crying. Loudly. And she alternates between the two while she’s in the pool. Twice daily for an hour at a time. At least.

Her parents seem quite normal and nice – but do nothing about the noise she makes. The crying I can sympathise with. A bit. I don’t have kids but had a niece I was close to and now have a friend with a toddler I see often. I know what it’s like when kids are upset, but this little girl is ridiculous. The mother saw me shutting my door the other day but still didn’t try and quiet her daughter’s squeals. I can only think she’s used to them and doesn’t notice.

It’s not just (intolerant ole’) me. My mother and I were walking along the esplanade near my apartment yesterday and #TheSquealer and her family were fishing down the road. Well, the parents and older son were fishing. #TheSquealer was squealing. I heard them (her) before I saw them.

“That’ll be #TheSquealer,” I said to my mother. And sure enough there they were.

“Good god!” she said. We were quite a distance away but the high-pitched squeal still extremely loud despite the wind.

IF I heard her mum telling her to ‘use her words’ or shushing her I’d be far less grumpy. Instead I’m kinda tempted to complain to the onsite managers. The manager is usually a bit grumpy with kids in the pool and regularly chastises relatives of another owner whose grandkids squeal and splash about the pool (while the grandmother ignores them and reads!).

On one hand I don’t want to ruin these people’s holiday. But on the other, I’m wondering if they don’t realise how loud and annoying the squeals are.

Of course, I could just continue bitching about #TheSquealer on social media and spend the week counting to 10… and then they’ll be gone.

Any (helpful) advice?
PS. I say helpful cos I realise that most people will probably feel like someone on my FraserCoasting FB page who told me to ‘Suck it up Princess’!!!

* I may be exaggerating slightly. #TheSquealer is not making my entire life a misery – but I live in dread of her heading to the pool and me having to close up my doors and windows for an hour or two each time. I heard the mother telling the boy they were here for 2 weeks so he’d have time to learn to swim. This was a week ago and I hope when she said two weeks, she meant approximately…and meant like… 10 days. Or so.