I’m again joining Denyse for her Life This Week linkup and today she’s asked us to consider the fact there are two months until Christmas.

Bah humbug! On that note. I’m not a big fan of Christmas, though this year I think it’ll just be my mother and I… which is entirely doable. My mum loves the crap that comes with the silly season – cards, decorations, presents and so forth; but (thankfully) is easily dissuaded from overly formal lunches and the like.

However… the lovely Leanne from DeepFried Fruit (and she really is lovely, I’m just not saying that cos I love a bit of alliteration!) wrote about this very thing on the weekend – the fact that the year is almost over. 2017 is nigh, and all that.

“Fuck!” I thought, wondering what the hell I’d done with the 298 days I’ve survived of 2016. And then I remembered I have been kinda busy. There’s been a new job with a lot of travel around the region. I’ve sold my place. I’ve bought a place. I’ve moved. I’ve had some health issues and surgery. I’ve been to a blogging conference and a couple of writing events. And I’ve read (and reviewed) 116 books. So far.

But, although I stayed away from the whole ‘New Year’s Resolutions’ concept, there were things I was SUPPOSED to do. Things I WANTED to do. I wanted to pitch some freelance articles to someone who would pay me. I wanted to do some work on a novel I was supposed to start last November. I wanted to become a more resilient person. And perhaps meditate. (Am saving world peace for next year, in case you were wondering.)

Interestingly although I’m a tad aghast at how much time has flown by this year my comment on Leanne’s post was surprisingly positive.

It means I still have TWO months left in which to get shit done.

I mentioned in my weekly check-in that I’m hoping most of my work travel is done for the year and shortly a big meeting will be out of the way and things should calm down a little. So that just leaves the fun stuff. My writing and blogging. Settling into my house. Spending time with loved ones. And… just being. 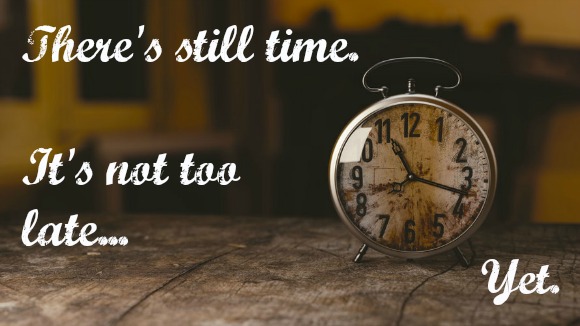 I know the next two months will rush by but it doesn’t mean I can’t try to make the most of them. So to keep me honest, I pledge here that I will:

These next two months will pass anyway… whether I continue to spend it wasting my time on crap and ruing the things I haven’t done; OR whether I get my butt into gear and get shit done.

Are you dreading the next couple of months or relishing the remainder of 2016?