Given my lack of non-bookish blog posting I’m going to try to attempt random posts about stuff on my mind. I’ve mentioned before that I miss the old style blogging that was akin to a journal or keeping a diary. I realise it’s often of interest to no one but me, although I do dip in and out of others who blog daily (such as House Goes Home) and enjoy it. I often tend to jot ideas into my phone and never do anything with them. Or I start a blog post but realise either: I can’t sustain a whole post on such an inconsequential subject; and/or my topic is entirely pointless or of no interest to anyone other than me.

But… I need to get back into the habit of writing, so here I go…

When did geckos arrive and where did they come from?

My verandah, well my whole house, is often resplendent with gecko poo. It seems worse here than anywhere else I’ve lived. My house is very white. Perhaps they like light colours? Either way, I was thinking about them (ie. geckos) the other day and really only remember them coming into my consciousness when I lived in Cambodia in 1997. They were everywhere and there was even a police blotter page in the local English newspaper named after them. I also recall someone telling me they sometimes fell from the ceiling if they were mating. I’m not sure if that’s true however, and am reminded I was once told toads turn into rocks during the day, which was something I actually believed until I was in high school. 🙄

But back to geckos. I don’t remember them when I was a kid. I don’t even remember them being around in my early 20s. We didn’t have outdoor verandahs when I grew up, so maybe they were lurking but not obvious or able to get inside. Although now they scurry around my house having made their way in through tiny cracks in screen doors and airconditioners.

Maybe they were introduced accidentally at some point. Like cane toads. Or TikTok? 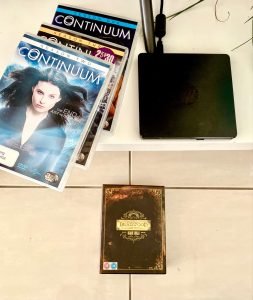 I decided the other day I was in the mood to binge-watch some TV on DVD. I picked through my collection – which now hides away in a cupboard given the arrival of streaming services – and decided on Deadwood. It’s a loooong time since I watched the amazingly-written very sweary show (2010 according to that blog post!). But then it occurred to me I didn’t know ‘how’ to watch it. I still have my old DVD player, packed away with my non-working TiVo. But I figured surely technology has advanced since then. My laptops no longer have diskdrives. (And most don’t of course.) So I found my external disk drive and plugged it into my television.

It whirred and a light came on but nothing happened. I couldn’t connect to it as a ‘source’. So what’s a girl to do? I mean, do I need to pull out my old big cumbersome DVD player, or is there another option I’m missing?

Please feel free to comment. Advice is appreciated and most welcome.