So… I had most of today’s blog post pre-written but events since the return to my own humble abode have caused me to shelve it. It was an upbeat peppy post you see, but now I’m frankly not in the mood. (Insert grumpy face here!). At some ungodly hour this morning (well, okay, it was 6am!) I caught an express train from my childhood hometown to MY current hometown. And, because I am eminently sensible and mature I starved myself until I arrived home so I could get on my scales and compare them to those I was using at my parents’. I WAS thinking the 2.9kg weight loss in my first week (with only 2 days of counting calories) was too good to be true. But instead I agreed with everyone that my mother’s scales must ALMOST be right and so took a bit off and counted a 2.4kg loss. Just in case. HOWEVER…. now that I’m home and have been on my scales I’m at least 2kg heavier than I was just a day or two ago, so… well… who the fuck knows?! Anyway, long story short, I’m now grumpy and incapable of posting something upbeat. 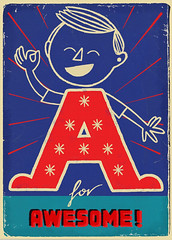 Instead I will again write about how aspire to be a peppy and positive person. (Bit of alliteration there in an attempt to cheer me up!) I didn’t get much blog-reading done while away but came across a post referred by Boyfriends make you fat’s, Julia.

In Waking up full of awesome Melissa, a mother, notices how her daughter wakes up each day excited and eager to greet the world. In the post, Melissa includes a picture of her daughter dressed in a way that only 5yr old girls can dress, complete with missing front teeth, pink striped sunglasses and posing for the camera. As you do. Well, not really…. as you ‘did’. Once upon a time.

She reminds us that we also once woke up ‘full of awesome’. We were awesome and we knew it. We loved ourselves and our bodies and we thought we were clever and smart. But this was before. Before we let someone take our awesome away by telling us we weren’t pretty / smart/ good enough. Melissa wonders why we listened to them. “What if they were full of shit?” she asks. 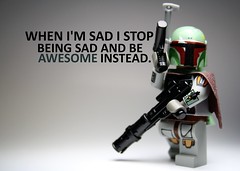 What if they were? And… we have to take responsibility as well. After all ‘we’ (read ‘me’ here) let others make us feel that way. We let them steal our awesome.

In the picture Melissa’s daughter looks like she is ready to take on the world. She’s fearless. And happy. Joyful in fact. She reminds us that we are missing out if we aren’t waking up full of awesome each and every day.

Melissa wrote the original post in early August, but just recently added a note to say that page of her blog alone, had 412,000 hits. OMFG! I get excited if I get more than 50 or (occasionally) 100 hits in a day.

I’ve got a few favourite childhood photographs. The ones I like the most are the ones in which I look happy. Fearless. Full of awesome. It was before I thought I wasn’t pretty, smart, rich, funny or good enough. These photographs are from the time that I used to climb over our BBQ with a microphone, performing (even though I can’t hold a tune). The photos are from the time I hadn’t yet started to compare myself to others and found myself wanting.

A couple of nights ago I’d been for a walk and still had my headphones on with music blaring into my ears. I was just opening a bottle of champagne and was feeling on top of the world (no, I hadn’t yet indulged in any champagne), but I remember dancing around the kitchen as I tidied things away and moved about. I do that sort of thing every so often. But not often enough. During the 30 days of self-love blogging challenge I undertook a few months ago, I remember saying that I needed to ‘find more joy’ in life. I wanted to be more joyous – rather than the misery-guts I often am.

Again, only I can do something about this. And… I need to stop just bloody talking about it. AND. DO. SOMETHING. I want to bounce out of bed like a 5yr old excited about the day, week, year and life ahead. I want to be full of awesome. Again!