Anyone who knows me would also know I’d rather stick a hot poker in my eye than go on a cruise ship. I know I know, my perception of oldies playing shuttleboard or drama a la The Love Boat are all seriously outdated, but I’ve never had any desire to travel aboard something that could strike an iceberg or spring a leak. (And yes I know the Titanic incident was a rarity and Poseidon Adventure a movie, but still…)

Which makes it more inexplicable that… I AM GOING ON A CRUISE. (And I’m actually looking forward to it!)

Now, I know this could lead one to think they’re in some kind of weird religious cult that requires them to be perpetually happy, but that’s not the case. It actually cos they’re all workmates and performers on a cruise liner, The Norwegian Joy. 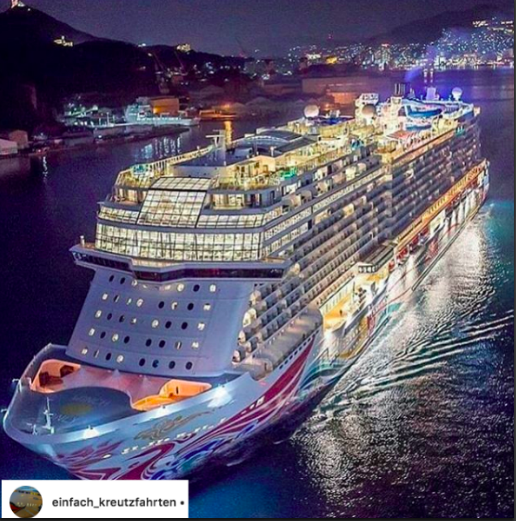 My sister-in-law and brother spent a week on The Norwegian Joy at Christmas and enjoyed their time enough that my SIL wants to go back around Easter. (Although obviously it’s more about seeing my niece than travelling on a boat between China and Japan – though she enjoyed that also.)

Long story short, she’s booking a cabin and I offered to be her cabin-mate. I mean, who am I to say no to free accommodation? In reality I’m doing her a huge favour. A public service almost. 🙂

I’m pretty sure she’s aware of my reported snoring habit, though I really only have my mother’s word on that. Although I’m nervous about the sea-sickness thing so perhaps I’ll be in the bathroom vomiting too much to snore!

Anyhoo I’m excited cos this boat is freakin’ huge. Like 19-20 storeys huge. It has waterslides and a go-kart track on the top levels. I’m unlikely to partake in too many planned activities cos… well, crowds. *shudders*

Interestingly this ship has been custom-built for Chinese travellers. I’m not sure what that means or how it’ll differ from other cruises… but as I’ve nothing to compare it to it’s not really a problem at all.

And quite frankly I’m always happy to dine, drink and lie about and read. Of course I’ve not been to China or Japan, so there will be a smidge of sightseeing amongst the frivolous lolling about. And then of course there are stage shows to be seen – occasionally three times a day.

It’ll be lovely to see my niece in her native environment. I didn’t see her during her Disney gig so I’ve not seen her perform for a while. Also, cos I’m a weird Instagram stalker I already follow half of her fellow cast. (Well I follow some and the hashtag #NorwegianJoy which helps.)

Of course there are boring and tedious bits to this trip. Like the flights and logistics and the usual crappy stuff and we’ll only be away just over a week in total. But, it’ll be good prep for my longer European trip in August and September. After not travelling overseas in a decade or so I’ll be going twice in a year!

I know a lot of my fellow blogging buddies have written about their cruising experiences before so I must read up before I leave. But until then…

Any cruising MUSTS? Or MUST-NOTS?