All of my best-laid plans have gone awry this week. I’ve gone from one town to another for work and never seemed to be where I needed to be. And there have been some early starts. I keep thinking I’ll get into a routine at some point, though it occurs to me that may be a pipe dream. Perhaps I need to be less ambitious on that front… and just be thankful to be putting one foot in front of the other day in and day out and not alienating tooooo many people.

Frazzled
By work. Which is why this post is late. I vowed I wouldn’t let work get to me in the way it used to and I’m not doing a very good job of that at the moment. Plus I need to be less of a perfectionist control freak. #justsayin

Reading
Nowhere near as much as I should. The last few weeks I’ve received quite a few books and my to-be-read (TBR) pile is overwhelming.

Watching
Altered Carbon on Netflix based on the book by Richard K Morgan. It was convoluted in some ways, though easy to follow in others and not quite as addictive as I would have liked. There was A LOT of gratuitous nudity which could offend some viewers. To me it seemed a bit salacious more than anything. I’m not sure if there’s as much nudity in the book or if it’s meant to be shocking in a superficial and hedonistic kind of way.

The basic premise of Altered Carbon is that there’s a future in which our consciousness can be downloaded and backed up into a ‘stack’ and replanted into new bodies (called ‘sleeves’). It’s a bit of a mindf*ck and reminds me of a post I wrote ages ago (about cryogenic freezing and) the surprising extent of my mind / body connectedness.

What astounded me as much as anything was how amazing Joel Kinnaman looked. I hadn’t seen him in anything other than The Killing and OMG, it was like the difference between the nerdy and annoying William McInnes in Blue Heelers vs his appearance as the dreamy, sexy and beach-babe Max in SeaChange. (And I realise only Australian readers will know who I mean!)

Excited
About a trip to Brisbane this weekend. Well, I’m not excited about: 1. The trip (the drive); or 2. Brisbane. But… I’m taking my mum and we’ll stay with my brother and SIL and I’ll catch up with my old girl-gang AND there will be a blogging catch up with some of my fellow ‘Lovin Life Linky’ blogging buddies and I’m really looking forward to meeting most of that group for the first time.

Eye-rolling
At the idea of online dating. I’ve half-signed up to an online dating site – in reality just adding my details without being visible as yet. And I have to say it’s incredibly depressing. I can’t decide if I’m being incredibly arrogant when looking at local (ahem) talent or completely out of touch with reality. I think it’s kinda like this…. 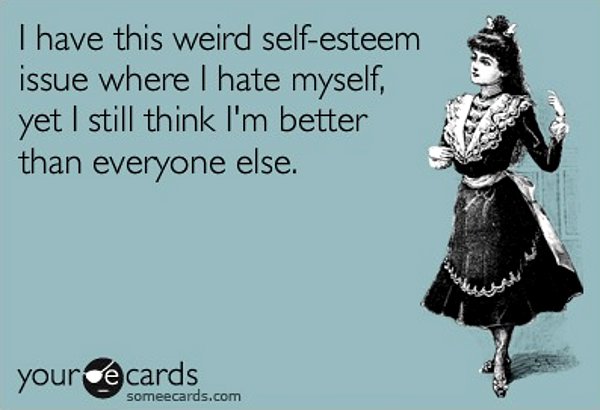 Anyway, let’s just say I’ve basically decided to shelve the whole idea. (And I should clarify that I’m not opposed to the idea of online dating as I did it in my late 30s and early 40s. Not to mention speed dating and the like. Obviously to no avail!) 😉

Any Netflix suggestions? Do any of my new book arrivals appeal?