I’ve come to the interwebz before for advice. It occasionally works, other times… well, not so much. But I’m pondering on something so thought I’d check with my learned friends online.

Because my new place is so much bigger than my old place (and I’d ditched stuff to move there) I negotiated to keep a couple of green leather sofas from the previous owner. She was elderly and going to live with family or in a home or something. Either way, I don’t think she needed them. Her style was far FAR different from my own, but… I liked these sofas and they are now in what I think of as my ‘formal’ lounge room. Or… place where I can sit and chat to people. 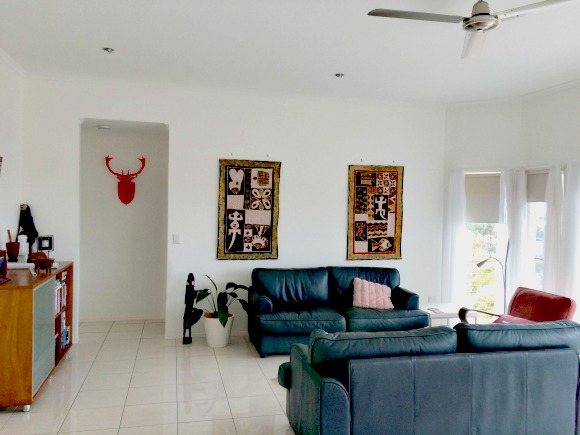 My plan was to put my fabulous green Zimbabwean wall hanging behind the sofa, cos it would match and it’s fabulous. Oh, and did I mention it’s fabulous? It’s featured in my last two properties (below) and survived the last decade or so (on walls) unscathed. (And a decade in storage before that!)

However… the previous owner (here) had a myriad of artwork but was seemingly as ‘handy’ around the house as yours truly. There are multiple hooks on the wall behind the sofas but all in the wrong positions for my wall hanging. No matter where I ‘centre’ my hanging, hooks would remain visible on the edges… or there’d be an unattractive hole in the wall where I removed the hook. And… (though you cannot see it because of my temporary wall hangings (from South Africa in top photo) someone has (ahem) ‘patched’ the wall in various places around the hooks, so there are different tones of white paint and it looks kinda ugly.

My options as I see them are to: leave the two hangings there now… but they’re too much of a reminder of my Brisbane full-time working life and apartment tones of chocolate brown, navy and forest green. My new life is brighter. ‘Funner’. And I want my green wall hanging there. *stamps foot in tantrum*

So… I could put it up and remove surrounding hooks, hoping the patched paint isn’t too obvious. Or… I could repaint the wall in its entirety – either white (as it currently is) or… some fabulous feature colour. Something not too scary but elegant. The flip side of that being I get sick of it quickly and the house loses the lightness it has from its all-white walls. 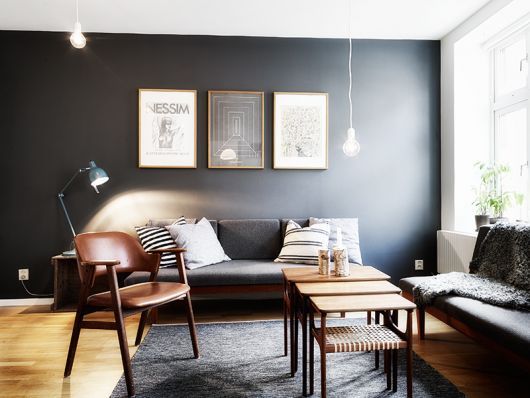 So dear readers… what are your thoughts? Feature wall? Repaint. Try the wall hanging and see if the extra hook / hole / patched paint looks too bad?

I’m linking up Trish from My Little Drummer Boys for Wordless Wednesday. Though I’m not very wordless. As usual.