This post is brought to you by Mortein and my *strong* dislike of ants.

My twitter followers would be well aware that I’ve recently had the great misfortune to be plagued by a terrible fate.

You might remember my mini meltdown about 10 months ago when I discovered hordes of the bloody things traipsing about my apartment. Fortunately I was able to rid myself of the pests and have basically been ant-free since that date. However… the bastards are back.

Initially I thought the ants I came across were just an aberration of sorts….

But then they returned. With a vengeance. And it wasn’t pretty. Some were on the verge of sneaking into my larder!

Have I mentioned how much I hate ants. Think they’re coming from aircon vent. Possibly just asphyxiated myself with spray!

I’m not actually spray-averse and indeed I use mosquito repellant and sprays to combat moth infestations and the occasional cockroach. But given the ants were predominantly invading my kitchen and living room I was keen for something a bit more subtle!

And fortunately some friends recommended, instead of asphyxiating myself with spray and using an entire can in one anger-induced episode, I use ant baits.

An ingenious idea and (as it happens) I’ve successfully used them before.

Indeed, I’m embarrassed to admit the circumstances and had hoped it wasn’t as significant as I remembered, however when I mentioned it to my mother she seemed to recall the time well. D’oh! (Score another for Deborah – the horrible daughter!) 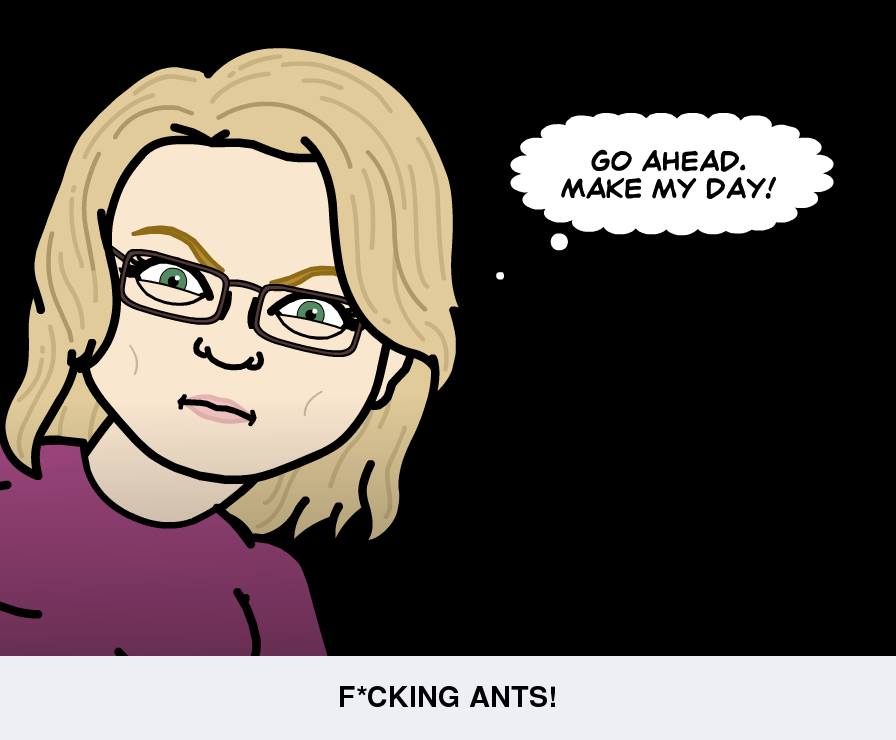 Almost three years ago (Christmas 2010) my parents were staying in my apartment in my former hometown while my father was enduring 25 radiotherapy appointments over a five week period.

Being the nice tolerant daughter I am (#not) I had a huge tantrum, sprayed the area furiously, flung furniture about, vacuumed and mopped – all while swearing ferociously about the perceived infestation.

I’m sure my parents felt I was blaming their presence – and I probably was!

I calmed down quickly – as I am prone to do but as soon as possible rushed out to buy something to fix the problem long-term. 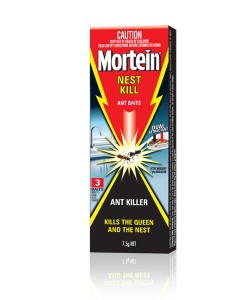 Ant baits. And they did the trick.

As I understand it the baits house a mixture of sugar and protein which attracts the little buggers. After feeding from the bait they head back to their nest and infest their fellow ants, including the Queen herself (insert regicide-related maniacal laugher here!)

So, I’ve stocked up again on Mortein Nest Kill Ant Baits. The Mortein website provides some information on where best to place them, but what I like the most is that they’re essentially an easy and no-mess way to rid yourself of  ants. 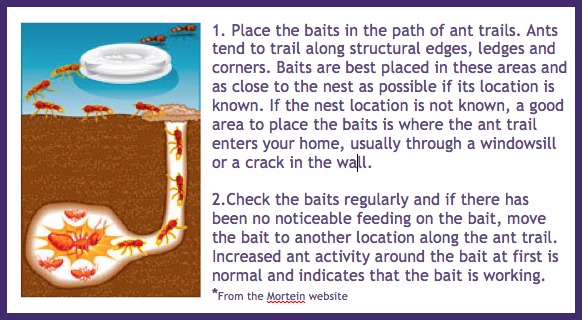 If your ants are coming in from paths / gardens outside there are complementary products to deal with that problem as well (ie. ant sand). Mine mostly appear to be coming from an airconditioning vent, although there’s a bit of a trail near my verandah.

So I’ve done a quick vacuum to make sure I have NO crumbs lying about and I’ve placed my baits in a corner near the verandah door opening and then in kitchen nooks and crannies. I may need to buy and install another batch before summer is over, but much prefer this self-contained method of ant-genocide. Anti-cide. Or something.

Have you tried ant baits?
Or do you prefer sprays or other alternatives? (In my vast research – aka Google – I noticed that ants don’t like orange peel, for example!)
Do you think I should patent the term anti-cide or add it to wikipedia?

Disclaimer:  This is a paid post, however all opinions expressed in this space are mine, written with the objective of giving readers my personal opinion of the ant baits discussed. Oh… and I really do hate ants!

PS. Apologies to Buddhists and those who don’t agree with my murderous ways. xx

And I’m flogging my blog With Some Grace today!