About a year and a half ago I shared my fave caramel fudge recipe. I have extremely fond memories of school fairs and fetes and ‘helping’ my mother prepare batches of caramel and chocolate fudge for fundraising stalls. They were her forte and she didn’t veer from her winning produce. I can’t recall her trying coconut ice or other delicacies. Instead she stayed true to her own first love. Fudge.

Mum’s fudge was special. Not like that mass-produced crap you can buy at supermarkets or sweet stores. Nope… this was the good stuff. Homemade, compliments of some 1958 recipe which came with her Sunbeam mixmaster. 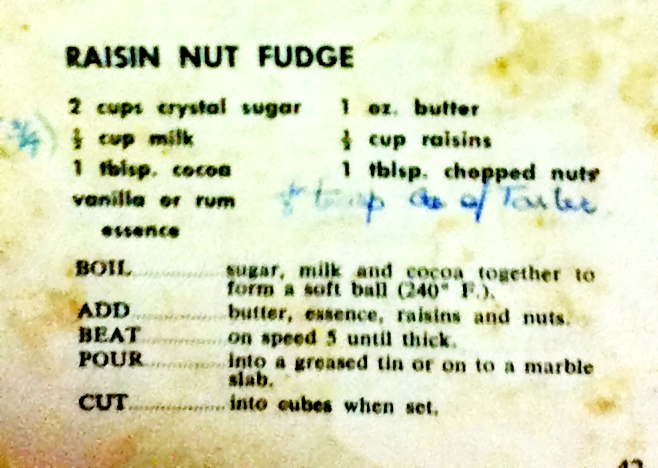 While on recent mother-sitting duties (ie. staying with mum after her hip replacement operation) I pulled out the ancient recipe book and decided to try my hand at chocolate fudge.
You will note that the recipe actually involves raisins and nuts. Mum obviously ignored the non-necessities and focussed on the good stuff! Plus I don’t like fruit or nuts ‘in’ things!

Lessons learned
I must confess that it wasn’t – ahem – entirely successful:

However, although ‘thin’ and a little over-candied in places, it was as good as I remember and so ridiculously easy I could make it myself (ie. without the supervision of my mother). Better still, even I would generally have the ingredients required on hand, and I could halve / quarter the amount as an occasional treat or dessert, without making the entire batch.

Now I know I’m far from a food blogger and these pics confirm that; but… given that even I didn’t stuff this up (completely) is evidence that ANYONE could try this at home!

Are you a lover of chocolate or caramel fudge?
Are you a connoisseur of fine fudges?