Easter is again upon us and it is supposed to mean more than chocolate bunnies and public holidays.  But rather than contemplate what was purported to have happened nearly 2000 years ago, I find myself relishing glimpses of life just 30 years ago.

For my family, Christmases were spent either in far-western Queensland or on Fraser Island.  Both of which presented my parents with logistical nightmares in the 1970s: long car trips on dusty dirt roads; or weeks without access to electricity or shops.

Easters, on the other hand, were spent closer to home.  My Poppie and step-grandmother (Gwen) lived just 30kms away at the (then, and mostly now) sleepy seaside town of Hervey Bay.  Although we often visited on weekends, Easters provided my family with day after day of beachside living as Gwen and Poppie lived right on the Esplanade.  We only had to cross the road and we were on the beach.  Our beach.

The days were idyllic.  Waves crashed onto the shore and my brother and I would sit on the rocks or nearby cement steps letting the water crash over us.  On really high tides we could jump off the steps into the frothy surf.

Not fishermen ourselves, we would occasionally accompany Poppie or Gwen across the road to try their luck, or trudge after them through the low mudflats as they used something that looked like a bicycle pump to dredge up yabbies for bait.  Back then the Urangan pier was long and in desperate need of repair, but a landmark nevertheless.  The walk out along the rotting timber beams seemed endless and it was often deserted bar a few wrinkled and roasted fisherman camped out for the day. 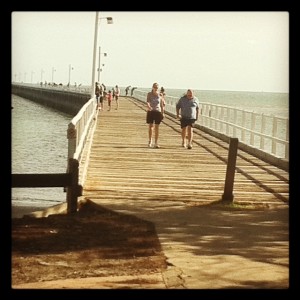 We stayed under Gwen and Poppie’s house; an old 1960s timber two-storey home.  A more retro and less elegant version of a Queenslander.  Now in my middle-classed middle-age I would rather be prodded with a hot poker than sleep under there, but at the time it was part of the adventure. The cement floors were adorned by straw mats and linoleum cast-offs from renovating relatives.

The uncovered walls and ceiling tastefully festooned by cobwebs and other unmentionables; and old dusty smelly (possibly never-washed) curtains separating the beds.  There were also two old lounge chairs and we would lug our old black and white television with us which required constant adjusting of the rabbit ears to get any reception at all.  A cooktop rested on a bench in the laundry alongside the big concrete tubs and washing machine.  I suspect my mother desperately missed her automatic and iconic whirlpool during those visits when she was forced to use the hand-operated wringer.  Or possibly she just made us wear the same clothes for four days and avoided the contraption completely.

Easter was my favourite of the ‘holidays’.  My birthday received little attention coming just three days after Christmas, and Christmas itself held little allure for me.  Though always happy to unwrap whatever gifts lay under our tree, I didn’t like turkey, Christmas pudding, Christmas cake or mince pies.  So for me, Christmas lunch was just another nice roast dinner.

But Easter was the culmination of my favourite things: chocolate; and the freedom to eat it all day, for any meal, without repercussion or chastisement.  And eat it all day I did.  Easter after Easter.  Year after year.

My brother was always more temperate than I (and far less prone to obsessions and gluttony), so while I would have finished my goodies by the time we headed back home on Easter Monday, he would eke his out for another week or two.  Purely to torture me, I am sure.

My favourite Easter offering was the Red Tulip bunny.  Elegant Rabbits I think they are called today.  They remain my favourite.  In those days everything was Red Tulip.  No Lindt bunnies, or Mars Bar eggs or other hand-made goodies emerging out of a deli rather than Coles or Woolies.

As a child in the 1970s my Easter haul always included the aforementioned RT bunny, a carton of medium sized (RT) eggs packaged in a clear plastic egg carton (which seemed inspired back then).  Then my mother would split a packet of RT caramello (my favourites) and solid eggs and give my brother and I half each, and finally we would always get the infamous RT Humpty Dumpty.  So ingenious we thought… the way those smarties got inside!  Actually more often than not we also got one of those candy eggs, with the little messages inside.  I hated them but my mother kept buying them year after year.  I don’t recall ever trying to trade mine for chocolate with my brother, though I suspect he would have refused just because… well just because that’s what older brothers do to torture their little sisters. 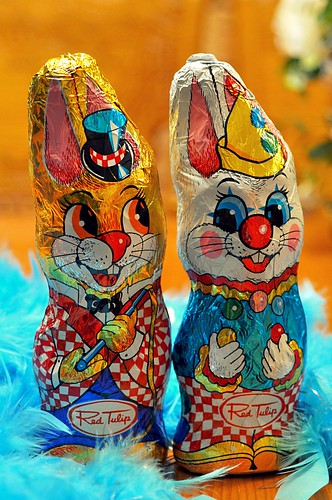 After I consumed each of my Easter eggs, the next of my beachside rituals would start.   Having carefully removed the foil from my eggs (my brother was – obviously – a far better and more patient paper-removerer than I!) I would put the wrapper through the hand-operated wringer of the washing machine.  Again and again until it was completely flat.

The result was a masterpiece.  The flattened former bunny or humpty dumpty face looked more like something Picasso would offer up than its previous incarnation.  I used to feel such a sense of accomplishment though I have no recollection of what I did with the wrappers after flattening them.  I suspect it was the ceremony of the whole thing that I loved.  Once they were done I probably just threw them away.

Anyway… that’s what I remember about my Easters-past; back when Gwen and Poppie were still alive; back when waves still crashed on the foreshore and before the sand dunes started eroding. My flattened Easter egg wrappers.  Temperamental rabbit ears.  Our old linoleum lining cement floors.   And washing machine wringers.

It’s funny the things you remember.