For reasons unknown to mankind I decided to ‘do’ Dry July this year. It’s one of those things I’ve always planned to do – like FebFast etc – but never got motivated enough to officially start.

Although I had no fundraising target and HATE (ie. absolutely HATE) asking people for stuff, let alone money, I went onto the Dry July website and signed up and put a half-hearted call out on Facebook for donations.

I realise the money isn’t for me and it’s for a very worthy cause, but I’m just not wired to ‘sell’ stuff. I can schmooze but not put the hard word on people. On top of that I’ve been very slack in donating any money to causes during my period of unemployment so don’t feel I can ask people to support me (or the cause I’m supporting) when I haven’t supported them. 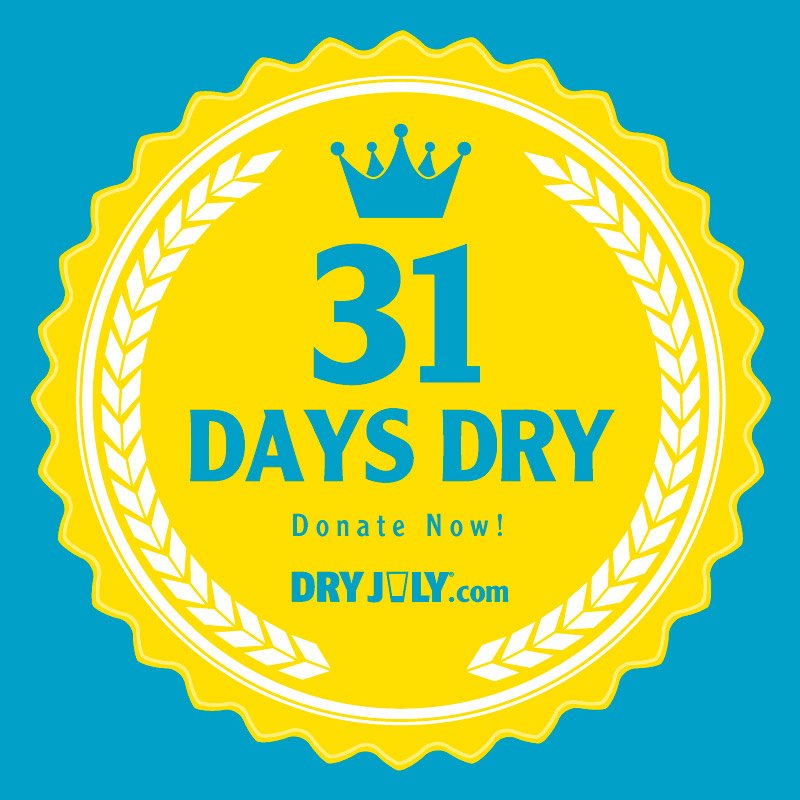 Anyhoo… that aside, I put something on Facebook mainly so I was kept accountable and that certainly worked.

I am pretty sure I would have caved very early on if I hadn’t declared to the world that I was going alcohol-free for July.

It was a struggle initially. I’ve often talked about my evenings and my personal ‘witching’ hour – between about 5pm – 8pm. It was hard enough when I worked in the city as I’d only get home part-way through that time but when I’m not working it means I’ve had all day to mull over the meaning of life and then the night extends that.

And I know, I could take myself off to the movies or do something. Perhaps not every night, but enough to break the boredom but I figured I just needed to endure the torture.

Which it was initially. I only drink water (well now with diluted juice since my surgery as I can’t drink plain water), diet coke and wine. I’m not a fan of hot drinks. I don’t allow myself to drink diet coke from about 2pm onwards usually as I’m enough of an insomniac as it is. So… the lack of drinking options was problematic for me.

It gave me the opportunity to look at why I desire my evening wine so much. Some of those reasons are – of course – personal; but also cos I (we) simply feel like we deserve a treat at the end of the day; and I realise it’s also partially just a habit.

You’ll be relieved to know that – despite some moaning – I actually got to a point that I coped without my evening beverage and it didn’t seem to be a blight on my otherwise contented existence. (And yes, that was sarcasm!)

However, there was almost always a time – mid afternoon – when I’d start to feel slightly depressed, knowing there was ‘nothing to look forward to’ that night. Thankfully I quickly started eating popcorn again and made more of an effort with my dinners.

I’d like to say that not drinking made me feel healthier or that I lost weight. But I’m sad to say it didn’t.

I mean, I assume my body appreciated the break, but I still woke tired and cloudy-headed and required diet coke to get through the day. I didn’t suddenly feel energised and sadly my skin didn’t magically improve in that month.

Those who follow me on Facebook will know I took advantage of the ‘Golden Ticket’ – ie. a night ‘off’ Dry July. For a $25 donation you’re able to have some drinks guilt-free. Kinda. I’d been at my mother’s supervising her kitchen refurbishment and was heading home when I told my mum that I’d planned to donate the $25 to myself – which would help me reach my (pitiful $50) fundraising goal and buy a bottle of wine to consume in the bath. I was tired and sore and felt like a treat.

My kind mum – who said she’d intended to donate but doesn’t do the online thing – gave me the money (which I duly transferred over) and called in at the local bottle shop for a bottle of red wine. It seemed ridiculous as it was only five days before the ‘challenge’ ended. But I mulled over it and went with it anyway.

My local pub doesn’t have many options but its wine is quite inexpensive. I’ve been at my mum’s for a few days during her kitchen reno. It’s partially finished – no splashback yet so no stove & powerpoints – but we’ve put stuff in drawers and (she returned today &) I think she’s happy. I’m a bit stiff and sore and tired of being nice to people so I told her I was going to donate $25 to myself for #DryJuly and buy a Golden Ticket which gives me a night ‘off’ or ‘on’ as the case may be. I was tempted go head into town to buy a fave bottle of red but took the easy way out and drinking this in the bath while finishing a book. I realise #DryJuly is almost done so it’s silly to ‘break’ it now but this is what I needed. (Accompanied by some chocolate.)

So, where to from here?

I’d been making myself have several alcohol-free nights in recent months anyway. As I’ve been a bit ‘down’ cos of the whole being-unemployed thing I’ve not wanted to tempt myself to drown or even moisturise my sorrows. Instead I’ve tried to mostly partake when out and about with others or socialising.

I realise sometimes it’s the ‘idea’ of drinking more than drinking. I see others sitting about on a weekend with glasses of champagne and want to be one of them. And I guess I can be again.

The biggest (non-alcoholic obvs!) takeaway for me after this month is knowing that I’ve got more willpower than I give myself credit for. And… things we assume to be virtuous / healthier etc aren’t necessarily, or at least don’t offer the bang from our buck we expect.

And finally, I’m still not convinced I’m a moderation kinda of girl – rather all / nothing – which is worrying. In general.

Did you do / have you ever done Dry July? Or quit / done something you knew was only going to be a brief change of behaviour?

Joining up with the Lovin’ Life gang again.