I’ve talked a bit here about my busy mind and the fact I struggle to relax. In fact I often try to force the zen more than I should and sometimes feel as if I’d try almost anything.

Which is why – although I was about a decade late to the party – in the mid 2000s I decided to try a flotation tank.

Friends and I were heading to Byron Bay for a girls’ weekend and on a previous visit I’d seen a brochure for a massage and relaxation centre so scoped it out on the internet before heading south.

After arriving in Byron I called into the centre to see if an appointment was possible and they offered me something straight away – a package deal involving an hour float and then a massage. My friend offered to pick me up later and left me to it. 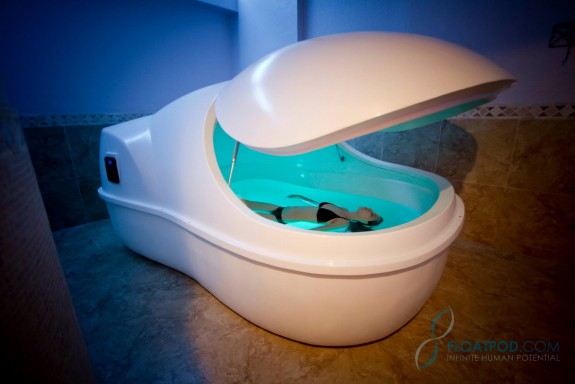 I’ve never tried anything THIS groovy! PS. Note she is wearing bathers!!!

All I really knew about float tanks before I tried my first one was what I’d read (the extreme saltiness is very beneficial and the sensory deprivation can be challenging for some) and what I’d seen on the TV show Absolutely Fabulous. 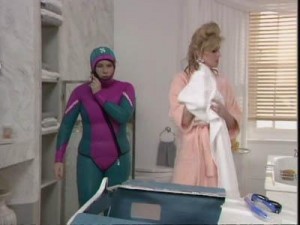 Unfortunately Edina’s experience on Ab Fab involved her being in (her own) float tank for mere minutes but thinking she’d been there for days – during which time she inadvertently adopted a heap of children.

I wasn’t entirely sure what to expect but the instructions were fairly simple. Shower before getting in and make sure you cover any cuts etc with vaseline – or the epsom salts will cause them to sting.

Then you pop in some ear plugs and get into the tank (which is actually bigger than I assumed). Close the lid and voila!

I actually had some regular ‘floats’ in Brisbane after my cherry-busting float in Byron Bay but it’s always pretty much the same. Very soft music is played inside the tank and it’ll usually stop when your time is up – a subtle hint that it’s time to get out.

I hopped in, prepared for the dark still nothingness. However, once I closed the lid I realised I could see a slither of light. 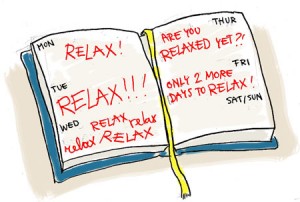 Damn! I started worrying I wouldn’t get the full zen experience if my senses weren’t completely deprived. And there was a bloody slither of light. So I manoeuvred myself around and put my head at the other end of the tank.

But my eyes kept going to the crack of light. I knew it was there and it was annoying me. Instead of relaxing I spent the hour stressing that I wouldn’t be as relaxed as I should be. Because of the bloody light!!!

An hour later, my music stopped and I got out. I donned a robe and headed into another room for my massage. It was bliss and I emerged from the centre an hour later to meet my waiting friend.

Miss T was patiently parked across the street and as I ran across to her I noticed that my brand new bathers (togs, swimming trunks – for peeps from other locales) looked strange. They seemed misshapen and were covered in white furry stuff.

Once in the car we examined them. The elastic had basically disintegrated.

“You didn’t wear them in the tank did you?” my friend asked.

“Umm…. well yes.” I admitted. “But the woman in the picture on the internet (stepping into the tank) was wearing hers, so I figured you had to.”

Miss T looked at me with something akin to pity. “They’d hardly include a picture of a naked woman on the site would they?!”

I wanted to argue with her logic but realised she had a point. It was most definitely a family-friendly website. “Ummm… I guess not.” I was definitely pouting by then, grumpy I’d wrecked a brand new pair of bathers.

I must admit – even now – I’d still like to blame the online picture but (if I’m honest) I’m really not good with domestic and practical stuff. I wash my whites and coloureds together. I don’t handwash. I don’t iron. Or I do iron – fabrics that shouldn’t be ironed. Even if there’d been no picture I probably would have worn my bathers into the tank anyway.

PS. I went sans bathers when I did some regular ‘floats’ after that. I know it’s a bit 1990s but I’d love to try it again though don’t think it’s available anywhere locally.

Have you ever floated? Would you?
Do you ever try to force the zen?