I was catching up on my Twitter news today when I came across this link and it reminded me of a conversation I had with my mother at Christmas.

As regular readers of this blog (yes, all 3 of you) will know, my parents were staying here over Christmas while my father underwent radiotherapy.  Throughout that time there was a similar stream of concerned calls.  Most came when I was at work so my mother dealt with them, but quite early on we established the fact that – if the phone rang, even in the evening – it was almost certainly for them as absolutely nobody ever calls me.

And I’m not saying that like it’s a bad thing.

I am on the DO NOT CALL register so don’t receive the pesky telemarketing calls; on the rare occasion my brother or sister-in-law call, it is usually expected or about some upcoming event; and the only calls I do get are from my parents.  As they were with me at the time it was unlikely to be them. Obviously.

The lack of calls is not a one-way thing.  I don’t encourage anyone to call me and I certainly don’t indulge in the practice much myself nowadays (other than to my parents). 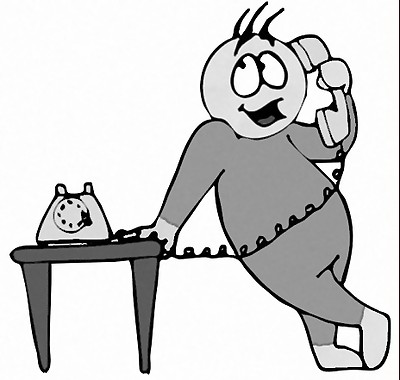 I do everything by email. In fact my hatred of telephoning people is such that I had some medical referrals which were almost out of date because I delayed making the call to the specialist to book an appointment (the referrals were only valid for 1 year!).  In fact I find myself increasingly excited that appointments can be made online or via email.

At work I email requests to people ostensibly so I have a record of response and so forth, but really the written word is more in my comfort zone. I enjoy pounding out a sentence or two on the keyboard; much more so than picking up the phone to ask the same question or give the same direction.  In all honestly I’m not sure when this aversion to telephone calls started.  I mean I can, by all accounts, talk the hind legs off a donkey, so it isn’t entirely about a lack of sociability.  I’m not sure why, I just don’t like the immediacy and hassle of telephone calls unless I have no other choice.

I keep in contact with my closest friends by email.  I send epic tomes of my day-to-day happenings and they send similar updates.  And then (of course) there’s Facebook and Twitter for the really important stuff.

Last weekend my late afternoon DVD-viewing of ‘Easy A’ was rudely interrupted by a person of some religious persuasion ringing my doorbell to sell me eternal life.  I said thanks very much but I didn’t have any money on me at the moment.  More shocking than his casual attire and self-effacing manner was the fact he appeared at all.

I am in an apartment complex and rarely receive those kind of visitors.  In fact when my doorbell rang I considered ignoring it completely as I don’t (like EVER ever) get unannounced visitors.  Of course I felt compelled to share the visit (and my shock over his visit) with my FB friends.  A number of others also commented that they don’t open the door if they aren’t expecting anyone. I was relieved that my hermit-like behavior hadn’t completely taken over my life.  To myself then and to many of my friends, ignoring unexpected visitors or calls is the norm, but I can’t help comparing it with my parents who have people ‘popping’ in all of the time.  My mother has cakes and slices at the ready to feed any unexpected guests.  Is it a small-town thing I wonder, or a generational thing?

I think of myself as being quite ‘difficult’ by not wanting to speak to people by phone or receive unexpected visitors, but it seems – from the NY Times article and friends’ comments – that I may not be as abnormal as I think.  Perhaps it isn’t that we live in impersonal times where human connections are fading; perhaps it is because we now have a choice.  We have less intrusive options at our fingertips. We email to confirm dinner arrangements; we receive SMS appointment reminders. Contact can be made when it suits both parties and no dinners get cold because of an ill-timed phone call. Frankly I’m relieved that it’s not just me.  For a change.