Disclaimer: Don’t worry… I’m not about to launch into great detail about bowel movements and the like. 😉

I still remember as a kid, finding it strange my great-aunt used to go on and on (and on) about her bowels moving. Or not. (And mostly not, from memory!) I was appropriately horrified – having grown up believing that one doesn’t discuss money, politics, sex or religion. And bowel movements. Well… except when they do of course.

My antipathy towards discussing bodily functions changed drastically when I lived in Africa for a while in the mid 1990s. I was only in Mozambique a week or two when I got sick. I realised later I’d eaten hand-threaded beef* skewers when out. Rookie mistake.

After seeing my body do things one can never unsee I pulled out my faithful travellers medical kit, which included a little booklet complete with flowchart.

If this; then that.  Sort of thing.

Horrified I found myself examining the fruits of my labour for things on the lists. Ah-ha! I thought and started taking the appropriate drug. And nothing happened. In fact, things got worse, so I switched to another. They were all pretty small doses – but powerful.

After several days of being chained to the loo some people I’d met tracked me down (not in the loo, obviously, but where I was staying). “Was I okay?” they wondered. 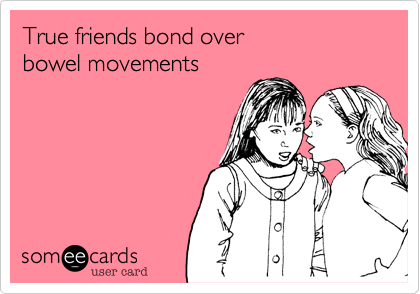 Gah! I shyly explained my stomach issues. And that was when I became privy to the well-versed-in-bowel-movements. They had all sorts of questions. They’d lived in Mozambique for ages and had crossed paths with all sorts of illnesses, from malaria to dengue to giardia and so forth.

Eventually I agreed to seek medical assistance and trudged off to the international clinic. The money it would cost stressed me out – although my volunteer organisation would reimburse me – I’d be out-of-pocket for a while. Once there I explained my symptoms to some poor Russian doctor however we reached a language impasse, both of us only having snippets of Portuguese language in common.

He understood enough eventually to do some tests and it was discovered I had suffered salmonella poisoning (which was a relief at the time). As I’d been unwell for a couple of weeks they were keen to put me on a drip but I knew my bill had already reached over USD200, so I took the exorbitantly expensive drugs they gave me and shuffled back home. #literally

That particular incident was the first of FOUR bouts of salmonella poisoning I suffered while in Mozambique over a 16mth period. None were pleasant and many far worse than the first, requiring not only IV fluids but painkillers as well.

Naturally any concern I may have had about the sort of blunt discussions I once eschewed went out of the window. Isolated and often desperate, my friends and I would go into intricate detail about all manner of embarrassing things.

I didn’t suffer as badly in subsequent overseas locations, and after being back in Australia for a dozen years I’ve regained my sense of propriety on the issue.

Of course, being coeliac means I can’t completely stay away from the subject – however recently I’ve had some other *ahem* digestive issues and had to again describe disturbing images to medical personnel. I mean I know that they’ve probably heard and seen worse, but still…

Do you shy away from certain topics? Are you queasy when it comes to discussing bodily functions? (Your own or others?)

* Supposedly beef but many of the butchers used donkey instead