Cue a drumroll as I’ve finally finished booking the accommodation for my Italian holiday. Which is – after all – now just over three weeks away!

I became a little flummoxed by fear (or apathy) despite knowing I really needed to lock down an itinerary and book hotels / apartments. It may well be my one and only trip to Italy so I really wanted to get it right. But of course, ultimately it also just needed to be DONE.

I’m flying into Rome and plan on jumping on a train and heading straight to Sorrento. Well, I plan to catch a train to Naples and it’s been suggested I then find a tour / driver / car to head to Sorrento.

I’ve got 3 nights in Sorrento, so two full days and it’s my intention to book in advance: a half-day tour to Pompeii (etc); and a full-day boat cruise type thing to Positano and Capri.

I want to book both trips before I leave. Work is going to be nightmarish for the weeks until I finish so I’m a little worried I’ll (otherwise) arrive in Italy and want to sleep or lie in bed for days on end!

From Sorrento I’ll catch a train via Rome to Florence, where I’ll have two nights at a hotel. Another person on my writing retreat had to cancel her trip so her room at the hotel was up for grabs and I’ve taken her booking for two nights before I head to Tuscany and one night after.

I have no idea as yet what I’ll do in Florence, but the room-canceller’s friend (who I’ve met online) will be staying there as well so there’ll be someone with whom I can take tea. (ie. Drink wine and be merry. #Inrelatednews I hope Chrissy drinks!)

Then of course the event this whole trip is planned around – the week-long writing retreat in Tuscany.

After a week of creativity I’ll overnight in Florence before catching yet another train to Cinque Terre for two nights. I finally decided to stay in Manarola, the second of the five towns (as you head north). I’d asked quite a few people for advice and then got overwhelmed with options on offer so procrastinated for a fortnight until fewer were available!

From there it’s onto Venice…. and you’ll notice I’m being vague about how I’m getting there but I’m assuming it’ll involve a train. Again. Or several. I haven’t been arsed looking at the intra-country travel stuff yet, but swear I’ll do so before I leave. Perhaps. 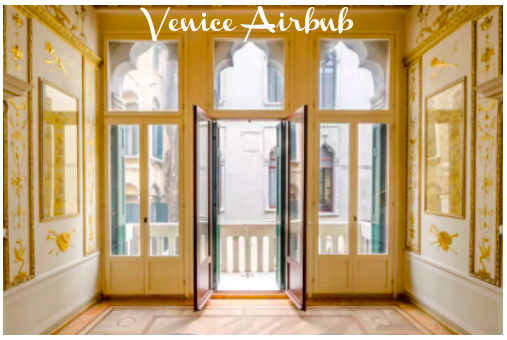 I’m staying at an Airbnb place in Venice, it’s just a room but on a canal (which probably isn’t unusual) and looks very grand. And old. My intent for the trip is to soak up the atmosphere so I’m trying to stay at places different to what I’d usually get here. (I suspect I’ll crave my modern house, bathtub & comfy sofa by the time the three weeks are over!)

I have no idea what I’ll do in Venice but I’m sure it’ll involve a gondola and wine. Sadly I’m travelling alone so I won’t be reenacting the scene from a favourite and much-remembered childhood movie A Little Romance (my first taste of Italy and commencement of my girl-crush on Diane Lane!).

From there I’ll catch yet another train to Rome. I’ve booked an Airbnb apartment there recommended by Styling You and it looks handy to all of the important stuff. I’ll force myself to do a few touristy things but suspect my time there will also just involve people watching, wine drinking and finding gluten-free food options.

Speaking of which, in addition to some day trip bookings, before going I need to:

So there you have it. I’m kinda ready. Of course I’ve not thought about what I’ll pack or anything like that, but I have taken out travel insurance so already winning at this responsible traveller / adulting thing.

Anything I’ve not thought of? Or any tips?