I’m all for technology – indeed my life revolves around it – however I was saddened by some local news earlier this week that, at least in my mind, is almost akin to the death of mixed tapes and video cassettes.

A local school has established an online tuckshop ordering system!

Now, given that I’m in a small regional town I’m assuming this kind of technology is already available elsewhere, but when I saw the news I couldn’t help but feel as if it was the end of an era.

Although I’m still scarred from the compulsory milk-consumption during my first two years of school, I have VERY fond memories of ordering tuckshop during that time. It was something I was allowed to do VERY rarely and I envied those kids who blithely munched on bought goods every Monday and Friday when the tuckshop opened (yes, back then it only opened twice a week). 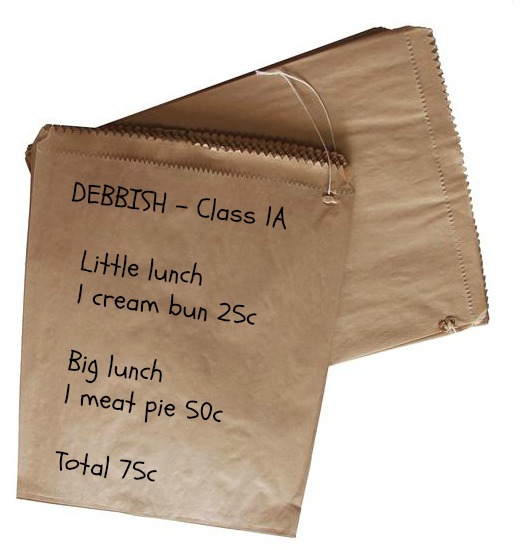 We little 5-7 year olds were considered too young to brave the tuckshop queues and deal with money, so instead we would be sent to school with a brown paper bag on which our parents would have written our tuckshop order. It’d often be folded over tightly and coins stuck in the corner (lest they fall out in our ‘ports’ enroute to school).

First thing in the morning the teacher would collect the brown bags from those youngsters having tuckshop and they would be whisked away (the bags, not the kids!).

At morning tea (aka little lunch) those with orders would gather around a tray of labelled goodies to get their food. And at big lunch, same thing, although usually people’s pies, sausage rolls or sandwiches were returned in the same little brown bag sent to the tuckshop earlier in the day.

Actually getting to GO to the tuckshop once older was indeed a treat, although by the time I hit high school the tuckshop wasn’t nearly as exciting… although I do remember the advent of corn chips here in Australia and having a small packet of cheese CCs almost every day for lunch.

I guess now mums or dads or kids themselves must sit down with their iPads, log onto the school website and tick little boxes. I guess it’s easier for parents to ensure their kids make healthy choices and don’t get their lunch money stolen by bullies… but still… it’s hardly the same as smelling the pies and seeing the butterfly cakes before deciding what you want.

Do you have tuckshop (canteen) memories?
Did you know online ordering is now possible?