I’ve already mentioned that Italy has been the only country I’ve ever wanted to visit. And maybe also Alaska. Though perhaps I mean the Antarctic. Or the Arctic? Whatevs…

Again, it’s the allure of something different…. beachside / seaside towns on hill and mountaintops, rather than those grazing the beach which I’m used to from Oz.

The decision re WHERE TO STAY in Cinque Terre was nightmarish. Far worse than a #firstworldproblem. In the end my apathy won out and I’d left it so long previous choices had disappeared so I decided fairly randomly to stay in Manarola – the second town from the south.

I had great plans of hiking between two of the towns. I’m not a hiker but I figured it was something I SHOULD do. However, after walking A LOT in the Italian autumn and 30C+ heat I decided not to bother and just wander around each of the towns instead.

I originally booked on a half-day boat tour as I’d so loved the small group boat trip I did from Sorrento to Positano and Amalfi.

Sadly that was cancelled the night before I was due to go because of the rough water / seas.

However, I must confess I really only minded because I was excited about swimming in the shark-free blue clear ocean again, rather than because of any vistas I might happen upon.

I only had two nights in Manarola and planned to arrive from Florence late afternoon. I’d already had to kill a lot of time waiting for afternoon check-ins but of course as it happened I could have arrived earlier as the hotel / accommodation thingy actually closed at lunch, so my 3.30pm arrival had me searching out a small safe and lockbox for a key.

After three trains (Florence to Pisa to Levanto to Manarola) and some waiting in between I arrived at my destination hot and bothered. The contact person had sent me photograph directions for my accommodation and HAD I followed them it would have been fine. Of course I got to the actual accommodation and stupidly asked someone, showing her the address to confirm I was right and she told me I was in the wrong place which resulted in 30mins of walking up and down hills with my luggage trying to find the right spot. Which – naturally – was where I had been much much earlier. So far it’s the closest I’ve been to frustrated tears.

Affittacamere San Giorgio
But the accommodation is AMAZING. I wasn’t sure if the pictures were misleading, but they aren’t. I realised it wasn’t a hotel, but I’d booked through booking.com so figured it was more of a hotel than apartment. But it’s an apartment and it’s lovely. I’m thinking of moving there. (Just so you know. Well, there and Tuscany!)

It’s pretty small and someone like my mum who’s not great with stairs would be screwed. (Well, she’d be screwed in Italy full stop as I don’t think ANY of the train stations in Cinque Terre have lifts – just steps and more steps).

The accommodation is actually built INTO the hill / mountainside. So the bathroom is up some trecherous looking steps. There’s a rope to hold onto but let me just say I wouldn’t want to have to get up during the night much or come home drunk!

The apartment has no TV / cooking facilities but had a fridge and wifi and is really well fitted-out. Very stylish and has a gorgeous balcony – that I’m sitting on to write this post. 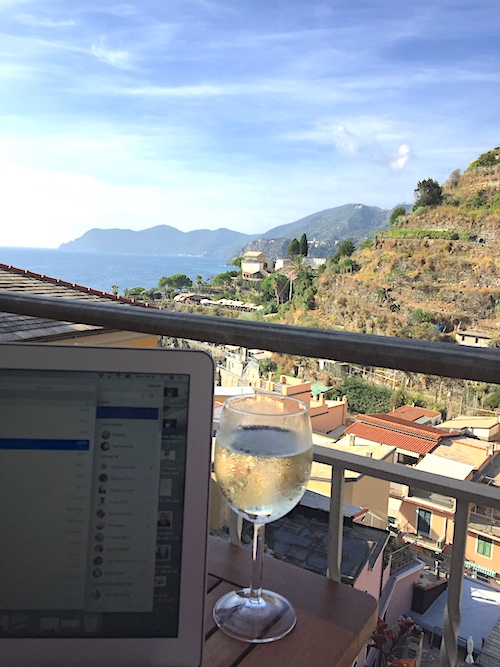 I spent much of the first evening here exploring Manarola and though a few places on Trip Advisor note they offer gluten free options, my experience in Florence was such that I’ve started looking for menus that specify allergies or at least tell you to talk to the staff about them.

One place I tried didn’t have gluten-free pasta and the others were pretty busy. I ended up at the same place (Il Discovero) two days in a row – pizza one night and pesto pasta the next. It’s near the sea so it gave me a chance to watch the sunset both nights.

Travelling around Cinque Terre
In the absence of my boat trip I bought the Cinque Terre train day pass (16 Euros). I think it allows me to do one of the hikes as well, but I was keen to just get on and off the trains (between Levanto and La Spezia).

I had a plan of action all worked out, heading to Monterosso al Mare in the north first and then coming back to Vernazza, Corniglia – skipping Manarola of course – going to Riomaggiore and then returning home.

Monterosso was actually a surprise. I’d heard it was the most touristy out of all five locations but I quite liked it. It was spread further along the coastline than I expected so I easily whiled away 90 minutes there. 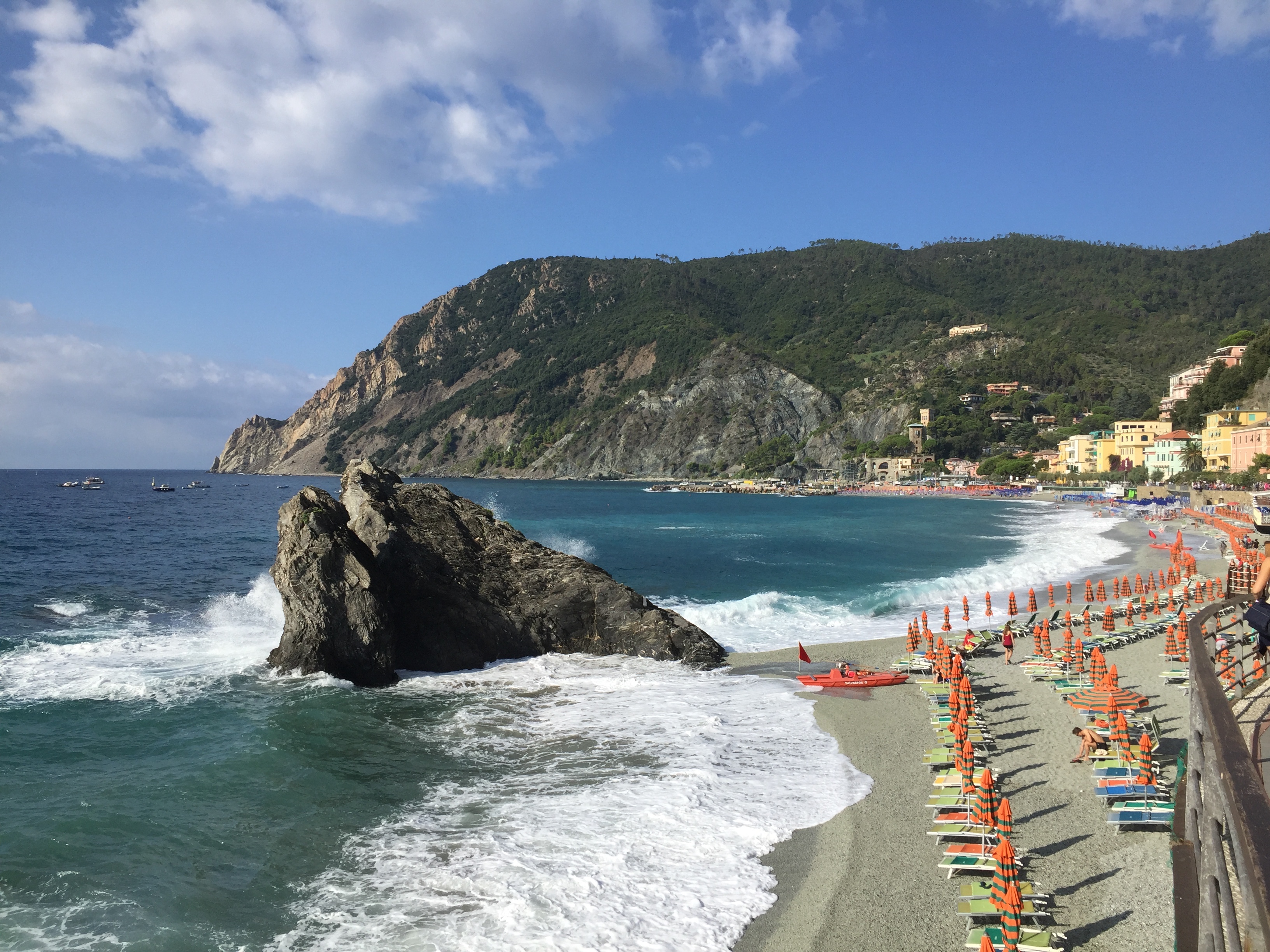 Vernazza is actually where I’d intended on staying, but OH MY FUCKING GOD! So many people (see first pic below). I’m not sure if they were staying there or just visiting as it was late morning by then. It wasn’t quite lunchtime and I contemplated lunch but there were so many people I decided to move on after an hour. My plan was to head to Corniglia, which I’d heard good things about.

By then my tolerance was waning and so I’d kinda decided to skip Riomaggiore and head home after Corniglia, however…. as fate would have it, the train was delayed and a train which went directly from Vernazza to Riomaggiore arrived at the station. Instead of waiting for the now-late Corniglia train I jumped on the first one to arrive deciding it was fate and I was to visit Riomaggiore instead.

It wasn’t amazing, but kinda quirky. Less tourisy than Vernazza thankfully (last pic above) and I guess that’s because you can’t actually hike from there at the moment as a couple of the hiking trails are closed.

Speaking of which I’ve never seen so many people decked out in hiking boots with walking sticks (the athletic kind) in recent memory. Soooo many people are obviously here for the hike.

As an aside (yes, another) I’m also shocked by how many people are trying to negotiate the Italian streets with prams, little kids and walking frames.

It’s been really hot here in Cinque Terre but the weather’s been beautiful. I’d happily live here if it wasn’t for all of these bloody tourists!