This meme / image* was doing the rounds on Facebook and Twitter over the past week or two. People were commenting with their childhood dreams or aspirations.

Most responses were career-oriented. Some seemed happy they’d pursued their passions. Some had a sense of regret or perhaps resolution. Others realised their childish fantasies were exactly that. Childish. Fantasies.

Because I have no life I’ll usually comment when someone shares something like that. I’ll offer up my favourite colour. Confess to the foods I don’t eat. Work out how old I am by my taste in music. Etcetera. 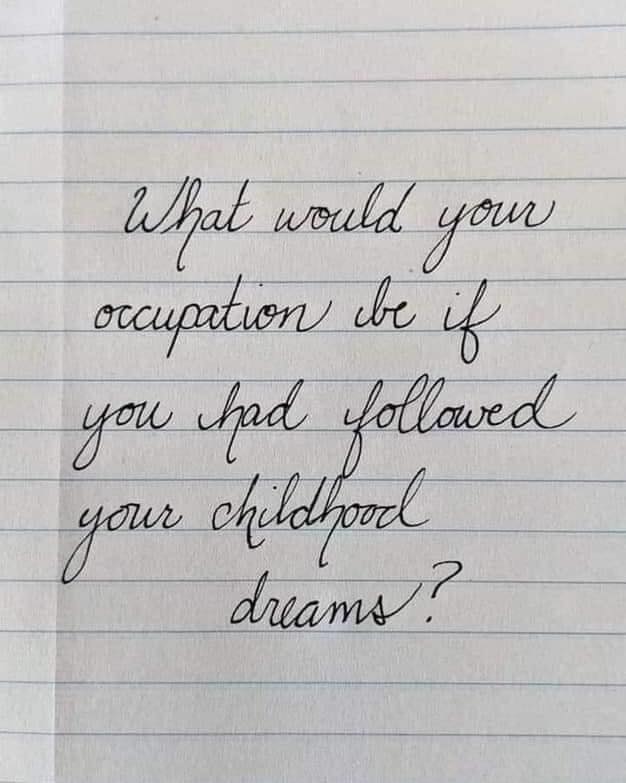 But I was stumped here. I mean there was the poem I wrote when I was in grade two about wanting to be a ballet dancer. (I remember it even today, and let’s just say there’s a reason I dislike poetry. And as a note to my 6yr old self: there should be a limited number of times one can use the words dancer and prancer in a one-verse poem!)

I liked writing and reading. I liked television and movies. I fantasised for a while about modelling but soon realised it wasn’t a feasible option and didn’t have the confidence to pursue it.

I had no real calling. Professionally.

Both of my parents were in what I’d call ‘jobs’ rather than professions they had any passion for. I assumed work to be a necessary evil to pay the bills.

So, after much pondering I realised that (when young), when I thought of my future, I thought of it in terms of being married with kids.

I would be a wife and mother.

I know? It should have been simple right?**

My parents would have been happy for me to opt for almost any job after school but my only motivation was to get out of my childhood hometown and University provided that answer.

I wonder if my lack of ambition was shaped by the world I inhabited at the time. I knew a couple of people whose parents were teachers. My uncle was a dentist – which briefly shaped my brother’s career aspirations, but most people I knew had ‘jobs’ rather than careers or professions.

I know of people of a similar age to me who didn’t have the opportunity to go to university, and certainly girls for whom it wasn’t an option. They were just breeders after all. So I’m very thankful my parents didn’t think twice about my education.

I wonder now though, if the fact I’ve changed jobs and professions SO MANY TIMES throughout my life is a reflection of that lack of aspiration when young?

Did you see this meme floating around? Did you know what you wanted to do, or perhaps you didn’t have options? What would your answer be?

* I saw this on many FB pages with no attribution so apologies I don’t know the original source.
** For new readers, I’m neither of those things….