It’s a couple of months since I’ve done one of these checking-in posts and I must confess it’s probably because I’ve had little news to share.

Central to everything is of course the job hunt, so I’ll start there…

Job seeker
I cannot believe I finished my last ‘job’ in September / October last year. Offerings have been very slim since though I’m actually in the midst of interview processes for two positions and just applied for another I should have a good chance at, though it’s via a temp agency and they’re kinda slow to get moving. God only knows what I’ll do if all or more than one come to fruition.

Each of the jobs has something different going for it, so I’ll just see how they play out.

I must admit I’m terribly disappointed (and kinda insulted) that I didn’t get an interview for another higher level job I would have thought was a good match, but I’m trying really hard not to focus on that, or the why.

Reading
I’ve cut back on my reading cos I’m still struggling with the reviewing process. I’ve been chatting with other book bloggers on our Aussie Book Bloggers Facebook page and think I’ve got some strategies. I’m such an all / nothing person I keep thinking about quitting but there’s no reason why I can’t only do a couple of reviews a month.

Feeling
I’m feeling pretty crappy in all honesty. Physically I mean. I’ve not been terribly healthy of late. I’ve never had terribly healthy habits (like ever, cos… remember that all/nothing predilection!), but my toddler / teenage-mimicking tendencies have been rearing their ugly head far too much and I’ve been eating badly and doing no exercise. I know slow sustainable change (ie. habits and routine) are what work but I feel far more desperate than that at the moment. As if I need an intervention of sorts.

Out and about
Despite my general malaise I’ve made an effort to socialise more and had a great time at a friend’s 40th birthday party last weekend. Her theme was ‘Op Shop Prom’ but most of us defaulted to an 80s and 90s theme. I had a great time and danced for the first time in yonks. 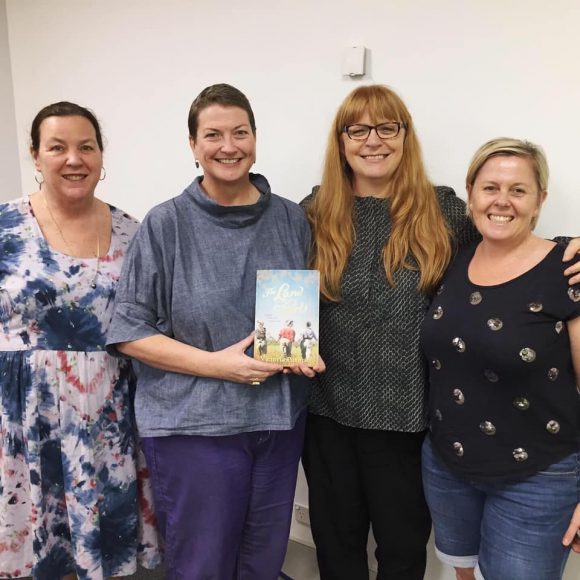 I also went along to the local library to hear author Victoria Purman speak about her latest book, The Land Girls. I hadn’t known women could sign up during WWII to work on farms throughout Australia and enjoyed hearing about Victoria’s inspiration for the book… including the stereotypic prejudices against the initiative and of course how quickly they were forgotten once the men returned home.

And finally I’m heading to a local food and wine festival this weekend. The weather isn’t expected to be great but I feel like I need to support these local initiatives. My friend and I have signed up for a Paint, Scribble and Sip session. And I’m EXTREMELY unartistic / creative visually so I’m thinking it’ll be a trainwreck.

My friend suggested we do it first before we get stuck into wine-tasting but I’m wondering now if my creative juices might have flowed more after a lot of grape juice. (Obvs I mean wine!)

Ouch!
Meanwhile, I’ve hurt my back… I often have a stiff back that is helped by some stretching (and strategic cracking). But yesterday morning I was doing a catch-up pilates class and did pinched a muscle or nerve or something. I’ve had an extra day at my mum’s who offered up her bed and electric blanket but moving is currently somewhat problematic. *Sigh*

And that’s it from me. I didn’t mean to end on a non-cheery note but at least I know my back injury will heal. Soon. I hope.

What’s happening in your part of the world?

Linking up with the lovin’ life gang again.