Many years ago I worked for a national football club. ‘Twas back in the day when all-things-sporting ruled my life so the job was really quite perfect for me. I was pretty young at the time (deferred from Uni) and we socialised a lot. One day the coach – a lovely guy who shared my interest in basketball – saying he admired how incredibly laid-back I always was.

My closest friend at work was agog. “You must be kidding!”  she said and regaled him and others with tales about my stress-bunny behaviour.

She was right. He was wrong. Of course I was on my best behaviour with him  and others I knew less-well – never letting my stressed obsessive behaviour get out of control. My friend however, knew me far better.

I’ve always been a type A personality. I’m a perfectionist control freak who obsesses and worries about everything – before and after. I’ve tried to be more zen, but it’s kinda who I am so I’ve always just thought the best I could do was to learn to control it.

However… I’ve also been conscious that my life choices haven’t made it any easier. I’ve chosen edgy and high-pressure jobs involving politicians and high-profile initiatives. I’ve monitored emails 24/7 and run around office buildings to ensure that Ministers or Premiers are kept happy. I’ve deferred toilet breaks and holidays – generally putting my own needs after everyone else’s. In the workplace anyway.

And then things changed. I realised life was short and mine wasn’t heading in the direction I’d expected. I was unfulfilled and rather unhappy. Hence the seachange. 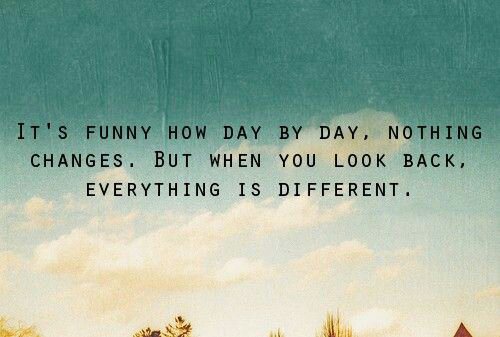 Fast forward (well, trot forward at a temperate pace) two years and I’ve now settled into my life by the beach in regional Queensland. I’ve surprised even myself with the contentment I’ve experienced. Sure, I’d like more money and a few changes in my professional life but I’m essentially happier than I’ve ever been.

I tell that to anyone who asks. I tell them that I don’t miss the city, my daily commute, the pace and the frantic nature of my old life. A life where EVERYTHING was so hard!

However… I’m currently back in the city for Christmas and I’m discovering I’ve changed even more than I realised. I’m staying with relations and extended family. We’ve had a few commitments – my SIL’s 50th, niece’s ballet performance and other bits and pieces and (of course) soon there’s Christmas.

And I’ve discovered something interesting about myself. Once upon a time I was in the thick of it. I would have been stressed and rushing about. I worried about stuff incessantly. I was my father’s daughter in that respect. I worried a lot about the little stuff and a bit about the big stuff.

However… that seems to have changed. As those around me have panicked and raced about in recent days I find I’m observing their behaviour with surprise. As they worry about parking, busy-ness, travel and organising crap I’m a bit like ‘whatever’.

It’ll be okay in the end, I find myself thinking.

People who knew the old me will be surprised I’m finding it so easy to step back and not do everything in my power to MAKE SURE it’s bloody well okay.

Changes in our thinking or behaviour are often so iterative or slow we barely notice them and I think that’s what’s happened in my case. I still talk and do stuff at a million miles an hour. That’s who I am, but at the same time I seem to have developed a mute button to shut down that voice in my head.

I feel as if I have more perspective. When in the throes of one’s manic existence it’s hard to see any way out. It’s not uncommon that many of us later wonder why on earth we ‘sweated the small stuff’. And yet we continue to do so.

When I first made my seachange I felt as if I was forcing the zen-like way of life upon myself. It wasn’t who I was. In fact I wondered if I could ever be the person I aspired to be. And yet…. now… I realise I’m on my way there. I may never get there completely, but I’m closer than I used to be. And – hopefully – in a few weeks, a few months and a few years I’ll be closer still.

And that’s all I can ask.

Have you have made small, iterative changes you’ve perhaps not noticed until later?