The first celebrity I remember having a crush on was Dr Spock – of Star Trek fame. With the pointy ears. Yes… I know. Strange for a young girl. But rest assured, after that my fancies were more predictable – actors and athletes… you know, the usual.

I’m pretty sure celebrity crushes are a common ailment and even more prevalent in those like myself prone to daydreaming and wonderment.

I’ve recently been reminded however, of a crush that lasted for years. Not just a fly-by-nighter – like Tom Cruise after Top Gun, Kevin Bacon after Footloose, or Boris Becker and Pat Cash during their fairly short-lived heyday.

No… a few of my friends and family know what it is I’m about to divulge, but I’ve decided I’m prepared to confess to the world at large. *Deep breath*

I used to have a huge (huger than huge) crush on South African cricketer Hansie Cronje (or Wessel Johannes Cronje as those-in-the-know would refer to him). And scarier than my teenage gushing over the likes of Tom, Boris or Kevin…. I was in my mid to late 20s during this starstruck era of my life!

It started in the early 1990s when he was vice captain of the South African cricket team. I was quite into sports in those days, but could contentedly sit and watch the Proteas on television just for a glimpse of my much-adored Hansie.

I recall his promotion to captain and – along with him – I endured his losses and celebrated his wins.

By the early-mid 1990s I was staying up overnight to watch our Aussie team play in South Africa, only going to bed when Hansie had finished batting. I’d pray (in the manner of an agnostic!) for him to remain at the crease for as long as possible, so I could… *ahem* continue to perve!

Bizarrely, my biggest fear over that time, was not just that my beloved Hansie was two years younger than me; or the fact that I was unlikely to ever meet him and (if I did) he was unlikely to be attracted to me. No. Indeed.

My biggest fear was that he was a bit too ‘nice’ for me. I’d read the stories and seen the interviews – he’d attend prayer meetings instead of post-match celebrations. Hmmm… not really my ‘cup of tea’. How, I wondered, could our relationship survive such different ideologies?

I was still ‘head over heels’ when I moved to Africa in the mid 1990s (and no I was not stalking him. Seriously!). At the time I was volunteering in a neighbouring country and used to go to the posh nearby hotel to scour the South African newspapers for stories of Hansie’s exploits in England (where he was then playing).

I poured over the papers week after week, month after month waiting for news of his return to the same continent on which I was – albeit temporarily – residing. And then… the news I’d been waiting for. He was about to return home. With Bertha. His wife. What. The. Fuck?! I had no idea. Seriously. He was only in his mid 20s, what the hell was he doing getting married? (And not to me!?!)

I was devastated. Maudlin for days. In all honesty (yes, I do display glimpses of sanity) I suspect I didn’t believe that I would ever meet him, let alone anything more… but he was a sign of hope. His existence gave me something to daydream about. Something to strive for.

Of course all of this was before the magic thing called the world wide web. Now I could just Google him and know absolutely everything I wanted to know. I could download matches and interviews, I could cyber-stalk him quite easily… but back then, information was limited.

My *ahem* love for him continued over the next few years, though the fires of passion were somewhat dimmed by the presence of a wife! So, while I did stop obsessively searching out news I tended to think of him a bit like a first love, with whimsy. 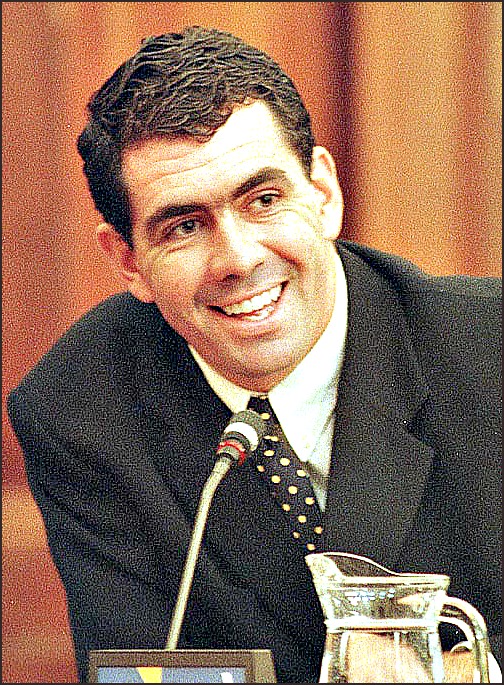 Until… in early 2000, the shocking news of his match-fixing came to light. Like so many others I was gobsmacked. Not my Hansie. Not the ridiculously too-good-to-be-true (and it seemed he most certainly was!) Hansie.  My adoration had already waned, but I remained hopeful the allegation would be disproved.

After he confessed I longed for justification. I was sure he had a valid reason (and it wasn’t just about the money!).  Although he was disgraced I decided he was still a ‘good’ guy. He had to be. In my daydream he would be rehabilitated. Oh, and his wife would leave him, making way for we more-sympathetic and forgiving types.

I must confess that – because I’m fickle – my fantasies had lapsed by mid 2002 when the news broke of his death in a plane crash. He was 32 years old.

I’m reminded of all of this now because his name has been in the headlines. Again. And there was a picture. Mono-brow aside, there he was with his soft wide eyes, which twinkled and crinkled when he smiled his gorgeous smile. (Sadly there were no photographs of his forearms, which were also my weakness! Weird? Maybe.) *Sigh*

The first article I read in our local paper included some stuff I didn’t know about Hansie. The Journo who’d followed his career admits Hansie’s life and personality were full of ‘extreme contrasts’: while he was mostly very anti-alcohol, he would apparently sometimes drink for hours alone in his room; and although he would bicker over minutia in a restaurant bill, he’d then shout others’ to dinner. 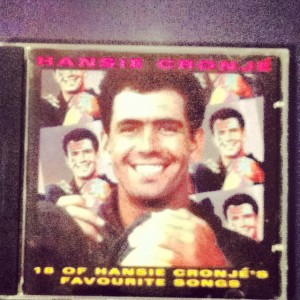 It’s been ten years since Hansie’s death. Hence the reminiscing. It’s strange that someone I didn’t know and never met could even impact on my life. And it’s been a bittersweet walk down memory lane during this renewed media interest.

I expect we all grow out of our celebrity-fancying period, and I’m sure others out there have tales to tell of unrequited adoration and lust? Don’t you???