Last year I shared a Christmas game / story by one of the members of my writing group. The details of ‘how to play’ are in last year’s post – but essentially it’s a pass-the-parcel game requiring participants to pass the ‘parcel’ to the left or right each time one of those words is mentioned. (I still prefer the notion of a drinking game… but that’s just me!)

I’ve actually not been attending the Writers’ Group meetings of late but still see the lovely Julie (author of last year’s story) and Pam on a regular basis. And Pam has very kindly shared with me HER left and right Christmas Story. Game. Thingy. Click here for a print version.

The trouble with leftovers is just as the name suggests, they are left over. So, I ask myself, is it right to foist them on to others right up until New Year? Let’s face it, Christmas is enough of a trial, right? What with the men escaping to their man-cave of a shed right after the meal – and you’re left with the oldies and two errant teenagers sitting on the sofa right opposite their slumbering gran, a stop watch held high in my son’s right hand, and running a tote on how long will be left before her teeth bungee jump right out of her mouth.

I noticed my mother begin to lean to the left, Tower of Pisa like. Or does that lean to the right? Anyhow, it will serve them right, I thought – with any luck, her teeth will get caught in the cradle forming at the left side of her lower lip.

“Quick, prop her up Jase, she’s leaning to the left,” yelled my daughter, Kate.

I swear right there and then, my son Jason, earned the rights to pole position at Bathurst the speed with which he bounded across the room.

With a slight of his right hand – skills he’s honed cheating at Monopoly on a regular basis – he caught hold of my mother’s left shoulder, grabbed all the sofa cushions and propped them right around her. She looked like an honoured guest in a Bedouin tent.

I tutted and left them to it. At least it was an improvement on the usual post-pudding farting competition. I trotted along the hallway, veered left into the Gaza strip and faced the enemy that had hunkered down right in the middle of my kitchen. This was officially a war zone. Left or right bank? Which area to attack first? I needed to plan this right or nothing would be left unscathed.

I decided a brandy and champagne may be the right course of action to get this campaign off on the right foot, so I did a mine sweep of the area, locating the pesky champagne bottle right behind the turkey carcass. As this was already an area of conflict, I decided the right thing was to tip what was left of the brandy right into the Champagne bottle and to hell with the consequences. The contents mushroomed out like a nuclear explosion. Luckily, I was right on target to slurp up the contents before they were left to form a dam right in the middle of the table.

Perhaps there was more left in the brandy bottle than I thought. My left and right eye swapped positions and I swear the room tilted to the left. I circled the war zone, arms positioned like aeroplane wings. And then it hit me, if this was war, I had to toughen up, get right out there and return fire. So I opened the back door, positioned the rubbish bin right in the middle of the gap and fired. The turkey carcass was the first casualty, obviously. It bounced off the left side of the door frame and hit its target right on cue.

I did a little victory roll – well, my eyes did, and then I spied the leftover brussell sprouts. Anyone in the know knows how dangerous these little missiles are if not handled right. They are capable of poisoning the air like Agent Orange. So it’s only right to treat them like the grenades they are. I loaded my right hand with one grenade and tossed it right into the bin. The next one veered to the left of target and landed right in the leftover brandy sauce. It sat right there – an oozing toxic waste dump.

I was about to discharge my third grenade when I was distracted temporarily by the sound of my kids cheering. I hoped they’d do the right thing and rescue Mum’s teeth from the carpet and rinse off the fluff before they left them on her lap for when she awoke.

I forgot that I’d swivelled around to the left to listen to the cheers and, without thinking, I threw my grenade. I watched in horror as it ricocheted off Jason’ head, and continued, bouncing-bomb style, right into the bin.

I indicated towards the leftover stock pile of weapons. Fully armed he fired at the bin. All missiles landed right on target.

We linked arms and did a little victory dance, punching the air with our right fists. Kate entered the room right at this point, took one look at us and rolled her eyes right towards the ceiling wearing her best what-did-I-do-to-get-such-a-lunatic-family expression on her face.

“Dad,” she yelled, “Mum and Jase have gone right off. There’s going to be nothing left in here.”

“Right off?” Jase and I said in unison, staring right down our joint barrels at Kate and then right at the stockpile of leftover sprouts.

Without any verbal communication we each grabbed a handful of sprouts and were about to hurl them at Kate, but my husband chose that moment to saunter right into the minefield and ask if I could make the man-cave boys some coffee and sort out some leftover cake.

And we did. Until nothing was left on the table.

“Goodness,” my mother said, as she hovered right next to the doorway, “it looks like a bomb’s gone off in here. It was never like this in my day. We had everything neat as a pin right after the meal.”

“Grrrrrr.” Next year I’m going far away, right down the coast in fact, and refuse to feel guilty about any relatives left behind, but for what’s left of today, I’m going to enjoy planning what to spend my winnings on. Oh, I forgot to say, I guessed right and won the bungee jump sweep stakes.

Pam Swain writes in the romance/chick-lit/contemporary women’s fiction genre. She is hanging on to the bottom rung of the publishing ladder – hoping to claw her way up – having had several short stories published in the Romance Writers of Australia and New Zealand Romance Writers anthologies. Pam has also had a short story published in Harper Collins’ URL Love e-book anthology (September 2012) and recently in the Queensland Rural, Regional and Remote writers ebook about inspiring women, which features 10 fiction and 10 factual short stories.

She is supposed to be ‘tweaking’ her novel-length manuscript, but has yet to find strong enough bum glue to keep her at her computer and focused. 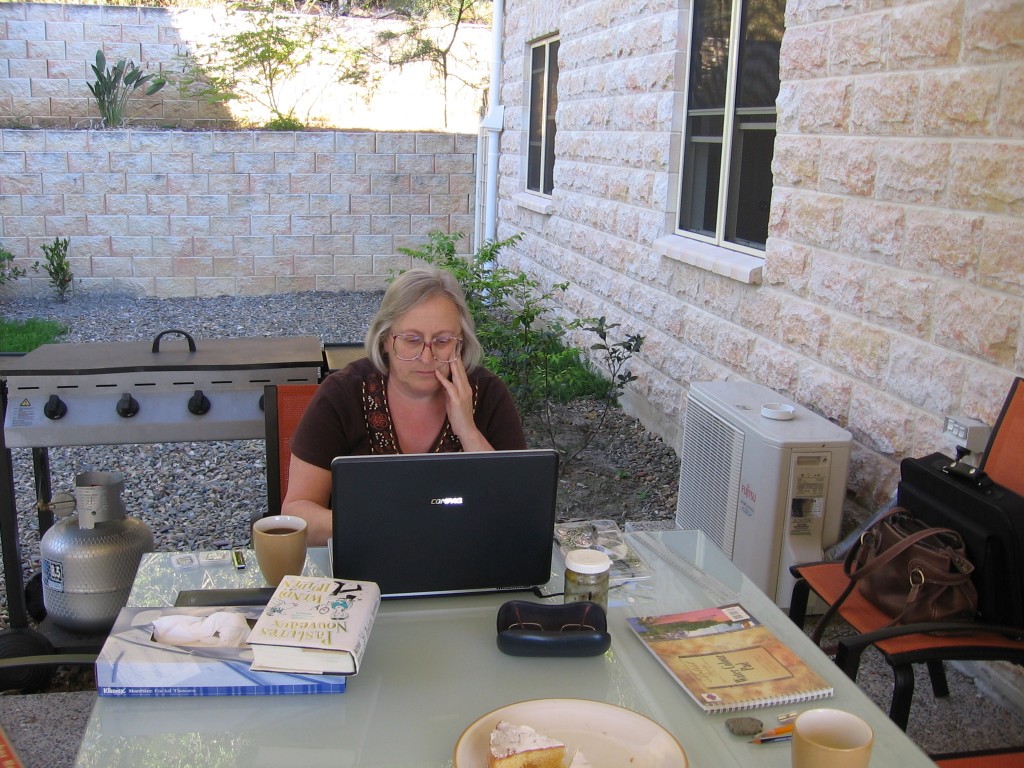 Pam loves life, her husband (who provides her with endless cups of tea when the muse strikes), friends and her crazy cat, Cleo – plus the numerous assorted wildlife that visit her garden – but not the snakes.

Thanks to Pam for her great Left and Right Christmas Game / Story – and I’m sure many can relate!

Click here for PDF print copy of this left and right Christmas story.