We’ve all experienced that feeling when everything starts to seem as if it’s slipping from our fingertips and out of control. Some of us are aware of the small warning signs; others remain ignorant until their world comes crashing down around them.

I read a post by Gretchen Rubin over a month ago on this very subject and it’s been marinating in my mind ever since.

In her blog Rubin, author of The Happiness Project and Happiness at Home discussed the ‘broken windows’ theory.

The ‘broken windows theory’ of policing, she explains, suggests that when a community tolerates minor examples of disorder and petty crime, such as broken windows or graffiti, people are more likely to commit more serious crimes. An indicator that something worse is yet to come, perhaps.

Apparently the idea is controversial in terms of law-enforcement theory, but she suggests it’s true on a personal level and I wholeheartedly agree.

Rubin’s own ‘broken windows’ are the particular signs of disorder that make her feel out of control and overwhelmed.

Another blogger I follow, Jules Joyce, talked recently about her unmade bed. As it happens, she wasn’t talking about it in the same sense as Rubin, but the visual has stayed with me. And resonated.

I’m a huge (self-confessed) control freak so when things around me start to slide, my own state of mind follows. Similarly (0r conversely?!), when my mind or emotions start to get screwy, things around me show signs of impending doom.

But… no matter how f*cked up I might be feeling mentally and emotionally, I generally try to portray the image of someone COMPLETELY in control; someone perky and zen-like. Sometimes the only evidence 0r indicators of my stress or angst are my ‘broken windows’.

I sit here writing this post in my standard wandering-around-the-house-garb. Which is kinda okay, except I often wear my grotty t-shirts and baggy sweat pants out in public.

Never fear… I’m not currently teetering on the edge of insanity or depression, but I have been thinking about the signs or indicators in my own life that I’m struggling:

Clutter and mess
Although I’m naturally untidy I hate clutter so when dirty dishes appear or stuff isn’t put away, you know things are about to go pear-shaped.

Unopened mail
It took me months to open the letter which contained my redundancy payout (as I suspected it wasn’t correct) and even now I have refused to check the figures. Similarly I have a water bill that’s been sitting in my letter box for more than a week. I know it will be bad and I’m just delaying the inevitable. Perhaps it will go away?!

Being slack at work
I have a pretty good worth ethic, in fact I was a bit obsessive about delivering on what I promised, but I did – from time to time – find myself achieving SFA over a period of days.

Washing lying about
Somehow, sometimes even putting my washing in the washing basket can be overwhelming. It will litter my ensuite bathroom or walk-in wardrobe until the pile becomes unbearably high.

Unpacking things
When  overwhelmed with apathy I avoid unpacking things: the dishwasher, my work bag, suitcases, the dryer. You name it… it’s full of crap.

Rubin notes that when she asks people about committing to a resolution to make them happier they tell her they’d like to “Make their bed”. 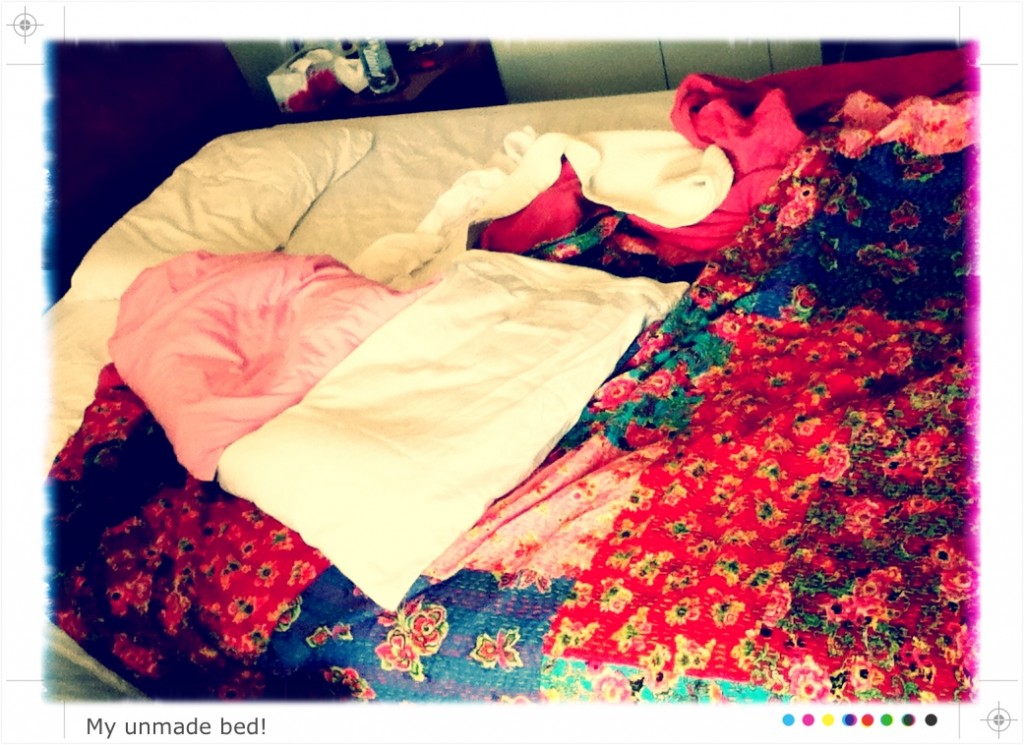 My bed is never made. I know this also means something but bizarrely it doesn’t worry me. At all.

But… I know what Rubin is getting at in her post. She agrees that tossing a pile of newspapers doesn’t really make a lot of difference in the overall scheme of things; BUT she says, small signs of order make us feel more in control and happier.

As I said, it’s hard to know which comes first… the funk causing my apathy and unread mail, or the unread mail and my inability to go grocery shopping being sufficiently overwhelming as to cause my malaise.

Either way, it doesn’t matter. I know (as do we all) that by taking some small steps we feel better. For me, it’s clearing my surfaces or putting my bloody washing in the laundry basket. And it’s the foray into the local supermarket which may only take 15 minutes but feels like a huge accomplishment and reminds me that all is well in the world.

Meanwhile, I’m off to unstack my dishwasher…

What are your broken windows?