Since finishing work and embarking on my seachange I’ve pondered on my passion for writing.

I’ve said I blog because I like writing. But… if it was that simple I’d just keep a personal diary (and I know there are some of you who may think my diet blog is basically just that!!!). But, it’s more than that. I wouldn’t press the ‘publish’ button several times a week if that was the case. I obviously want to be read. I want to be heard.

And I’ve generally been proud to call myself a blogger. “I blog,” I say, when anyone asks. But… is that enough, I’m now wondering?

A few months ago I wondered if I would have more street cred if I was writing professionally (writing feature articles or a novel etc) in addition to ‘just’ blogging. I mean, every man and their dog blogs now… we’re hardly a rare breed.

After I attended the ProBlogger training event in October, I asked if we were kidding ourselves, thinking that WE had something different to say and a better way of saying it. I mean, who do we think we are?!

In her blog, Present Imperfection, Caroline recently wondered how we bloggers were viewed by those outside of our world. I wonder just as much about how we’re perceived by our contemporaries. In her post Caroline talks about bloggers’ quest for stats or status by indulging in all sorts of nefarious deeds; and it’s something that leaves me with a bad taste in my mouth. 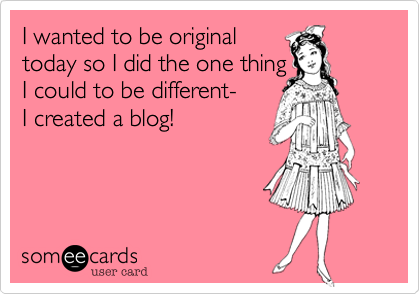 And lately as I watch the never-ending rounds of link-ups, debates on sponsored posts and monetisation and the changes to Facebook resulting in the much-detested ‘The link is in the comments’ line, I wonder if this is where I really want to be… in a world where bloggers are increasingly battling for attention and recognition.

When I finished work I thought that monetising my blogs and getting advertising and sponsored or paid posting opportunities was exactly what I wanted. But now… I’m not so sure. Don’t get me wrong, the offers haven’t flooded in, but I’ve had a few sponsored post opportunities as well as some paid posts and have more coming up.

Mostly I was happy to receive something and write about it – declaring my freebie and offering my honest (albeit polite) opinion. But occasionally it felt uncomfortable. I got a free magazine. I got six packets of chips – and yet, felt this weird obligation to say something in a blog post about them. But because I was just starting off I didn’t like to say no in case the company in question never approached me again.

I’m continuing to get a bit of blogging work and have a few (paid) blogging opportunities coming up as well as some ghost blogging (which – incidentally – I’ve decided I actually prefer to sponsored posts). In a perfect world I’d write whatever personal crap I want in my own blogs and happily write things elsewhere for others as required! But… it is not a perfect world.

On the weekend, however I was reminded that, somewhere beneath the surface, a desire to write ‘creatively’ still lurks.

Joanna Penn’s blog, The Creative Penn, is an amazing resource for writers. I did a workshop with Joanna (possibly my favourite Queensland Writers’ Centre course!) a few years ago when she was in Australia and have followed her blog religiously ever since, though rarely (almost never) comment. Yes, I am a lurker. And although I didn’t actually comment on it, her very recent vlog about writing every day, struck a chord with me and has inspired me to do some proper bloody writing.

Now, I’m not implying that my blogging isn’t ‘real’ writing… I do believe blogging IS writing but I can’t always be as creative as I’d like and spend a lot of time editing what I’ve written rather than just WRITING!

Bizarrely I love Joanna’s very simple word counting method (ie. writing it on a calendar and giving herself a ‘tick’ when she hits her daily target) and I’m thinking I might try that myself.

I haven’t worked out yet exactly what I’ll write or how I’ll combine creative writing and blogging as I write such ridiculously long blog posts that I could easily write 2000 words between my two blogs in a day. But, I’m going to just start writing and see where it takes me.

Are you a blogger or a writer, or both?
Do you ever get disillusioned?

* I’m linking my two blog posts today because they’re ‘kinda’ related. In Diet Schmiet I’m talking about getting into some routines and writing every day will be a part of that.