I was at a writing workshop a couple of weeks ago and the facilitator shared a quote… I didn’t actually make a note of the reference but think it’s fairly well known.

It was a memoir and personal essay session and the quote went something like… Just because you think you’ve got a story to tell doesn’t mean you have to tell it.

I’ve mulled over this from a ‘writing about crap of interest to no one’ perspective for a long time, but also more broadly as it kinda relates to where I’m at ‘life-wise’. (At least in a professional sense.)

I’ve recently been doing a bit of writing work for some local companies which has kept the proverbial wolf from the door (given it’s now a year since I finished my full-time contract). Some of that has been with a company I worked with just after arriving here and I’ve been offered a short-term part-time contract with them.

It came as a huge relief as I’d been grappling with an almost-too-good-to-refuse offer to work in Brisbane for 3mths. (Opportunities are limited here.)

Interestingly, no sooner had I agreed to this contract work, that a full-time senior-ish position popped up locally. When I logged into my ‘Seek’ (jobseeker) account I was advised that I was potentially a ‘very good’ match with this position on offer. It pays very well. And it’d suit my skillset.

But… I know what it would involve. I know enough about the gig to know what the challenges would be. The personalities at play. The politics of it all.

For a moment though I wavered. I SHOULD apply, I thought. I’d be back to where I was in my pre-seachange life and where I briefly drifted here just over a year ago. The money would allow me to fix things around my house, replace the tyres on my car. Even have an overseas holiday. 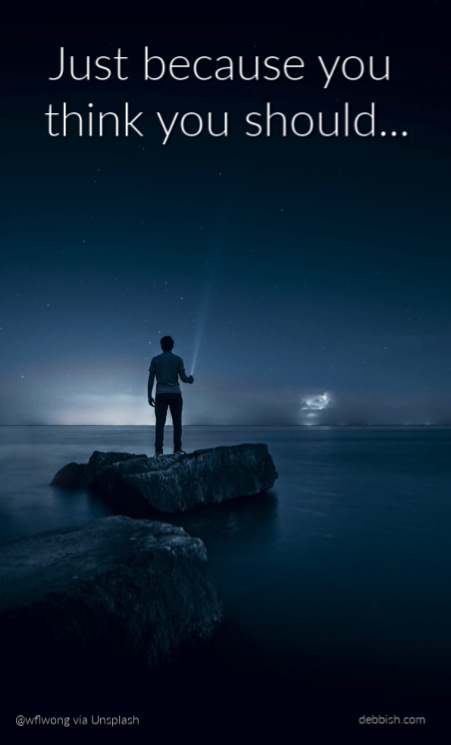 And then I thought about the ‘why’. It was more about the fact that it seemed like something I SHOULD aspire to, rather than being something I actually wanted to do.

I keep claiming I grapple with the financial security vs freedom and creativity thing with the former winning out. Perhaps they’re not the only values at play.  Perhaps it’s just as much about me thinking I SHOULD take a certain job cos ‘others’ would be more impressed. Or because ‘getting it’ would make me feel better about myself.

There’s a hole rabbit hole I can go down about my self-worth being too tied up in career choices or how I think others perceive me. But I’ve leapt down there before and still don’t have the answers.

I had my first meeting with team members in the contract gig this week (I’ll be mostly working from home) and the boss made a comment about the fact I was probably still looking for something else. Something better.

And I’m conscious of a strong sense of relief at being able to STOP looking for jobs. Worrying about what I SHOULD or SHOULDN’T apply for. What I’m prepared to settle for. About my finances.

Rather, I’m being given an opportunity to take up a contract with a group of people I know and like. And coincidentally another part-time gig may be on offer; and…. I might continue to get some writing work with someone else. It’s very bits and piece-y but will keep those wolves from the door AND (I think) give me the flexibility and freedom I crave.

So…. I’m actually thinking of unsubscribing from all of the job ad emails I receive and just ‘living’ my life, rather than desiring something ‘more’. It’s kinda freeing in many ways. Scary but exciting at the same time.

Do you do things because you think you SHOULD?

Linking up with the Lovin’ Life gang.