Although I watch an inordinate amount of television it may surprise you that I do actually have certain standards and boundaries.

I do not, for example, just have the television on in the background for company (unless it’s Saturday morning and I’m playing music videos while breakfasting or on the computer). So it was unusual one evening this week that I had the television on while I was preparing and cooking my dinner. (I suspect I was waiting for something to come on and switched it on unthinkingly.)

Nigella was on. Now I’m sure Aussies and UK residents will all know who I mean when I say that, but I’m not sure how well-known Nigella Lawson is in the US.

In these parts (anyway), she’s seen as some sort of television domestic goddess… alluringly voluptuous but warm and welcoming as she whips up some culinary delights in front of leering cameras and gazillions of viewers.

I’m actually not a fan of cooking shows, so while others (literally) salivate over the brilliance plated-up on Masterchef and the like, I change channels as soon as the pots and pans appear.

However, I left Nigella on in the background and even plonked myself down in front of her on a couple of occasions while things were boiling and zapping and so forth (not being a domestic goddess; or indeed, any kind of goddess myself).

I’m not even sure what the show was called as I know she’s had several TV series (and am too lazy to Google) but it involved a few different recipes over the course of the program. But what interested me the most (leading to this inane and pointless blog post) was that she ‘reported’ that her daughter had arrived home from school saying she had to take something for a school Bake Sale the next day. Like any hardworking mother, she was shirty that the daughter only told her the afternoon before, but unlike other mothers, she had a myriad of goodies on hand and an ability held by few.

It occurred to me though, that I found the notion bewildering. Oh my god…! Imagine being another mother in Nigella’s kid’s class. How self-conscious would you feel making your dodgy pikelets or dry cupcakes, when Nigella’s concoctions are going to appear. I mean, should one even TRY to compete with that? Or should you send the kids off to school with a packet of biscuits from the supermarket. Or perhaps you could zip off to the nearest bakery and claim a professional’s delight as your own.

I often read about mothers feeling self-conscious when they do the before or after-school pickup. They sometimes feel the need to primp and preen to avoid embarrassing their child in a world of luxury car-driving yummy mummies decked out in Dolce and Gabbana at 8 o’clock in the morning. So I can only imagine a child’s shame when a $2 sticker is placed atop a misshapen sponge cake they brought for the Bake Sale; and a $20 tag adorns a triple chocolate flour-free gateau (thingy) lugged to school by child-of-Nigella. Years of therapy may ensue. 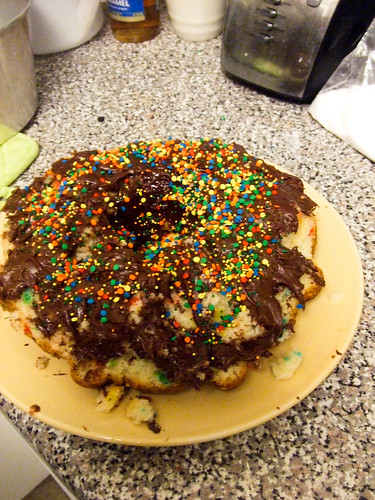 Cake fail. Not mine, though it could be!

When Nigella first appeared on the scene I recall many women groaning: no longer could they convince their loved ones that being able to cook AND look good, was nigh on impossible. But, it seems to me that over the years as others have come and go, and cooking shows exploded in popularity, we have accepted Nigella into our hearts and homes (and our bosoms – yes, I DID need to go there!) and appreciate her homespun glamour.

We didn’t see the outcome of the Bake Sale. Perhaps on occasions such as these, the domestic goddess is outnumbered by the other mothers who merely roll their eyes and cling to their failed offerings with pride.

*It should be noted that (in this episode) Nigella made chocolate brownies for school. So… perhaps she’s not OTT when it comes to ‘bring a plate’ day at school and the like.

Disclaimer: I cannot believe I’ve put this much thought into something that I really care so little about!