The fact I haven’t booked accommodation for my overseas holiday; talking endlessly about replacing my broken dishwasher but still hand washing dishes 2mths later; regularly bemoaning the fact I should be writing book reviews on weekends, when really I just want to sleep.

It’s been about 18mths since I started thinking I needed to do something about my verandah bannisters which are either rotting or just need sanding.

And then there’s the oft-mention draft novels. I’ve had a couple of drafts ‘open’ on my laptop/s since March. I’ve been carrying around print-outs of two first drafts for at least 2mths: taking them in my overnight bag to my mother’s. To work in case I take a lunch break. Back home. They’re particularly well-travelled documents.

I’m conscious though – and have talked before – about the fact that sometimes apathy can be about something else: anxiety or depression, or just a sense of temporary overwhelm. In my ‘broken windows‘ piece I talked about leaving dishes in the sink and not opening mail – as a sign (for me) that I was feeling like I wasn’t on top of things and needed to: step back and take some time out; or just ask for help.

For me it can be about self-care. Or self-preservation. I don’t have the emotional energy to deal with something so I leave it for a while, until I’m ready to pull the bandaid off and go for it. Or it’s about headspace and I don’t feel I can make a decision or even THINK about something until…. later. Either way I think of both as being short of the ‘whitespace’ I need to get shit done.

I know I’ve got a stake in my own proclamation of sanity but I actually think it’s quite mentally healthy to procrastinate from time to time. Or to shrug one’s shoulders and let crap fall by the wayside. Indeed, I’m constantly seeing memes nowadays about letting go of toxic thoughts, friends and habits.

I’ve been thinking lately though about avoidance vs apathy. Mainly because I unearthed this on the weekend while looking for winter jumpers. 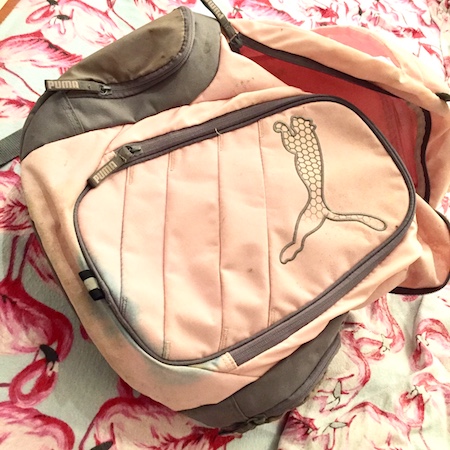 It’s the backpack I took to work daily for several years before accepting a redundancy and leaving my old world in September 2012.

I ‘could’ claim that it was because I’d left that old world behind and wanted to cleanse myself of the stressful life I’d been living. Kinda like a snake sheds its skin. Or something. But I actually hold no animosity towards the backpack. However… somewhere buried in the bottom – near the ‘inners’ (gloves worn under boxing gloves), gym toiletries and random pieces of paper, is the correspondence I received about my redundancy. The one with the sums in it: years of service, holidays and so forth – that calculated my final payout figure.

I’d been working elsewhere (for 21-22mths) when my old work unit was ditched. So I had to negotiate with the HR people from afar. And I felt there were anomalies. Our arguments went around in circles until I realised I was getting too stressed about it all and I let it go.

So when the final letter came in the mail, it – along with my calculations – stayed in my backpack. After my move I didn’t want to look at it or think about it any more. The stress of any money I might have otherwise had outweighed the money itself. And perhaps I was wr-wr-wrong anyway.

Seeing this bag made me ponder my apathy. Or what I label apathy… and when it becomes something more. 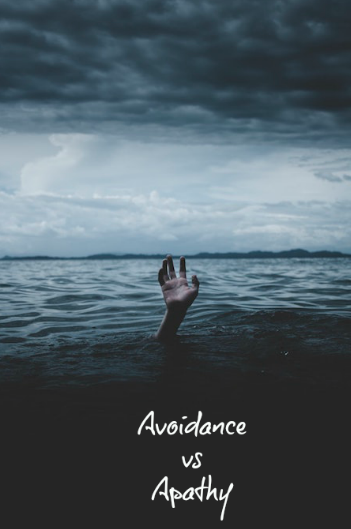 Pic by @greystorm via Unsplash

My vast research (ie. googling) indicates that apathy is a feeling that manifests itself via inaction and an attitude of indifference. And really, this piece in Psychology Today suggests we are apathetic because we just don’t care enough. (Although the article goes on to say it only becomes a problem when we no longer care that we don’t care, and has some useful tips for overcoming apathy for those who do care that they don’t care. If you know what I mean! Or, you know…. care.)

Avoidance, however is usually centred around ignoring or avoiding situations that cause discomfort or stress.

Which entirely makes sense. The list of things I’m apathetic about – buying my new dishwasher, doing something about the balustrades on my verandah and so forth… aren’t particularly stressful.

The other things I guess are less about time or headspace (whitespace), rather they’ve tipped beyond the point of lazy into the realm of discomfort.

So what does all of this mean?

Who the fuck knows?

In reality, for me it means that I don’t need to stress too much about my occasional apathy. It also means there’s usually something at play when apathy progresses to a more purposeful avoidance.

My holiday planning I suspect is somewhere on the apathy / avoidance spectrum. It may well be my last hurrah in terms of overseas travel and my one chance to get to Italy so I guess I’m nervous about making mistakes – worrying that I ‘should’ have booked different accommodation or done different things. I’ll remind myself however that we can only make choices on the information we have at hand and sometimes A decision is better than none.

As for my writing, I’m not sure. It’s certainly more than apathy. I’ve managed to continue blogging (to some extent) and get book reviews done. It’s just the novels that seem to scare me off.

The extensive research I mentioned earlier indicates that everyone is apathetic from time to time. Do you struggle with apathy? Is it because your care factor is low? What about avoidance?

PS. If you’re wondering about the fate of my backpack, I realise I’m over the stress of the financial payout so I’m planning to empty the frigging thing out this weekend.