A ‘memory’ from 2010 popped up in my Facebook feed on the weekend. In it I was commenting on the excellent service we’d had from a Brisbane hospital while my father was having six weeks of radiotherapy.

My mum and dad alternated weeks with my brother and I, and the hospital arranged night visits so we could take them there. My mother was comfortable driving around Brisbane at the time but the hospital is in the inner city and with new tunnels and bypasses it was a bit confusing to reach

When I think back to that time I’m struck by one particular memory. At the time I was working as an Executive Officer to a deputy head of a government agency and it was an always-frantic role.

Although the hospital did its best to accommodate us, on one occasion they had to reschedule one of his appointments to an afternoon. It was last minute and my mum was a tad panicked about getting to the hospital. We decided they could get taxis. (This was before Uber.) But I could tell they were nervous about the logistics.

It made complete sense for me to take the afternoon off and drive them. But…. I was busy at work. I was actually doing my boss’s performance agreement, to be signed by the Director-General which was due the following day. Of course it’s ridiculous that I was writing it in the first place, rather than him, but he’d left it to the last minute and as I was responsible for our reporting and strategic planning I knew what he was supposed to achieve that year. 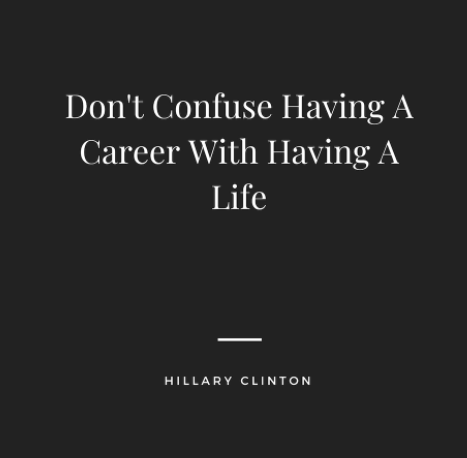 Eleven years later I recall being consumed with angst. In tears. Guilty that I wasn’t able to help my parents and frustrated that I felt obliged to put my job first. Worse still I felt I was working on something I shouldn’t have had to do.

In the end I took the afternoon off and worked that night instead but I remember the inner turmoil vividly.

I didn’t have kids or a partner. My parents had health issues but nothing that had me choose between my personal life and work. I always put work first in my old life. I’d rarely travel on holidays, choosing to just take time off, so I’d allow myself to be flexible agreeing to ‘wait and see’ how busy things were before taking leave. I recall MANY times texting my parents or friends on a Friday afternoon as I travelled home via bus to tell them that nothing had come up at work and I was indeed taking the next week off.

As I’ve gotten older (and wiser) I’ve realised that – unless we work for ourselves (and perhaps even then) – our efforts for our employers often aren’t appreciated. And if it is at the time, then it dissipates as memories of us fade.

I think nowadays I would just ‘tell’ my workplace I needed to take time off for a family or personal emergency. Because of the way I’m hardwired I’d feel terribly guilty and selfish about it, but over time I’ve come to better understand what I should be prioritising.

And sure… I need to pay my mortgage and bills, but there are certainly things that are more important.

I should mention that I suspect if I had kids I would have certainly been forced or chosen to put them above work commitments. Have others found that to be the case I wonder, or grappled with the need to choose?