I’ve been moaning talking about my single status in my other blog and was telling a colleague I was worried I’d over-shared. A tad. She missed the entire point and proceeded to give me advice on ‘how to find a man’. Which was fine. We tossed about ideas for a while before her voice dropped a decibel or two and she said, “You know, you could consider online dating.”

I suspect she was looking at my face for signs of horror or disdain. Instead I laughed. “God, I got over my antipathy to online dating and the like in my mid to late 30s!” Which is true. I rebelled when my similarly-aged girlfriends went down that trek, but after 35 came and went and Friday nights at the pub became too tedious, I caved.

She relaxed. Having been married FOREVER… she then pumped me for information about my experiences.

Bizarrely she was most intrigued by the notion of speed-dating, which was just *ahem* one of the tools I employed in an attempt to meet the man of my dreams.

In case you don’t know what speed dating actually is… It’s defined in Wikipedia:

“Men and women are rotated to meet each other over a series of short “dates”, usually lasting from 3 to 8 minutes depending on the organization running the event. At the end of each interval, the organizer rings a bell, clinks a glass, or blows a whistle to signal the participants to move on to the next date. At the end of the event participants submit to the organizers a list of who they would like to provide their contact information to. If there is a match, contact information is forwarded to both parties. Contact information cannot be traded during the initial meeting, in order to reduce pressure to accept or reject a suitor to his or her face.” 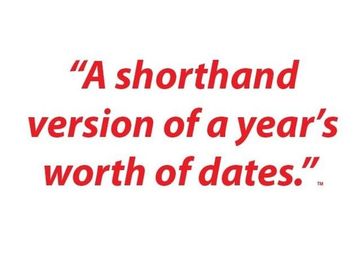 Given my still-single status, I obviously wasn’t overly successful in my foray into 8 minute dates (which I tried on two different occasions), but having regaled my colleague with tales of woe, I realised I was in a perfect position to share with you, a few basics… just in case you, or someone you know (you know… your cousin’s brother’s friend) is about to embark on something similar.

1. Go with a reputable company
A friend of mine tried a few different organisations and her advice was – you get what you pay for! The event that cost $20 (as opposed to $70, for example) was somewhat lax in sorting participants into age groups – so my professionally employed 35 year old friend had a number of short conversations with virtually unemployed 20yr olds! And yes, even 6 or 8 minutes can feel like a long time when you’re forced into a faux date with someone almost young enough to be your son!

2. Consider the venue
Another friend went to an event on a boat. It all sounds lovely… the big old steamer coasting up and down the river, city lights in the background. But… it meant she couldn’t escape. She went with girlfriends and couldn’t ‘escape’ with them to debrief after each session. Plus at the end of the night she couldn’t ‘get away’. I recall her talking about some pesky ‘hang-er-on-ers’ who she couldn’t lose at the end of the evening. She was literally stranded with them.

3. Common courtesy is a good thing
A woman I chatted to at one of the nights told me that she was at a previous event and a guy walked in, looked around the room… and left! She said it was SO obvious it made all of the women there feel like crap (before the evening even started) plus it meant they were down one guy!

4. Do not tell fibs!
People compare notes. And gossip. Even guys. This should be a no-brainer. A group of us were chatting during a mid-evening break and discovered that one of the guys had been telling furphies.  He’d told other guys there that he always says it’s his first time so he’s not thought of as a loser – when in fact he attended almost fortnightly events. WTF?!?!

On that note… I’ve never been with a girlfriend (god forbid we both liked the same person who then liked my friend and not me – or we both paired with them for later dates. Urgh!), but going with an opposite sex friend is actually a good idea. For some reason, even in this century the girls and guys often huddle in separate groups to chat. Knowing that some guy who’s tres smooth with the ladies, is in fact a twat who boasts about previous sexual conquests when with other blokes is quite useful! Similarly, some girl who’s sweet-as-pie with guys might be a closet bitch when relaxed around other women!

5. Don’t venture out if you’re not ready for a relationship
I was horrified when a guy spent his entire eight minutes with me explaining why he wanted to meet up with his ex again… (so he could have some sort of closure, in case you are interested!). They’d been apart for a year, I recall him telling me, but he never really knew why it ended and he figured if they could just talk about it. Egad! When comparing notes later (see point 4!) one of the other girls told me he actually shed some tears when talking to her about it! Yeah… I’m really gonna write his name down at the end of the evening!

6. Limit the baggage you share on a not-quite-first date
On both occasions I tried speed-dating I had guys who bitched about their exes. Sure, we all have baggage, but if you’re gonna rave on about the skank who cheated on you, took the house and won’t let you see your kids, I’m unlikely to see you as a good catch or worth the effort.

7. Don’t rush straight off as if escape is a priority
Both of my events were at a local bar and a group of us stayed for drinks afterwards. It gave me a chance to talk to a couple of the guys more than I had during the formal event, plus (on a different occasion) a girlfriend of mine hooked up (medium-term!) with a guy who she HADN’T paired with during the speed-dating, but ‘clicked’ with when chatting afterwards.

8.  Make some attempt to remember who’s who
I was stoked to hear from one of my pairings the day after the event. We exchanged a few emails before he commented on something which made me realise he was thinking I was someone else. I responded… saying that he was confusing me with one of the others there. Rather than apologise or feel any shame, the bastard responded by asking me if I remembered what her name was so he could contact her. Cos I’m a nice polite kinda girl I told him, but I never heard from him again – and am not sure I would have wanted to.

So there you have it. Just a few pointers if you’re thinking of trying speed-dating. Although perhaps it’s changed. My attempts were almost a half a dozen years ago. Definitely before Twitter. I’d certainly be tempted to live-tweet the event if I went to one now. Hmmm…. there’s a concept for a whole new dating experience. Or not.

Given my lack of success at online dating (via RSVP in my case), I thought I might continue the ‘how-to’ series with some more lessons for new players when it comes to searching for love online. I bet you cannot wait!

In the meantime, if you have any horror stories or pointers, I’d love to hear from you…