My father passed away late last year. So my mother, his wife of 48 years, is now living alone in my childhood hometown. She’s doing well, by the way. She’s surrounded by friends, very active and her social life leaves mine for dead. But… now when we talk our conversations are littered with her references to having a better understanding of what it’s like living alone.

Never fear, this isn’t going to be a post where I buy into the ‘is it better to be single or part of a couple?’ argument. No siree. I’ve bitched written before about my reaction to those who tell me they envy my nights of lolling in the bathtub when they are instead dealing with kids’ bedtimes and the like. There are those who get to spend a night or weekend sans partner or kids and decide it’s the life they’d prefer without really thinking what it would be like. Night after night. Week after week. Etcetera.

There are obviously benefits to living alone: no fighting over the television remote control; no ‘what’s for dinner’ arguments; no bitching about toilet seats being left up or down, or toothpaste tubes being squeezed inappropriately. And no one else leaving a mess that you have to tidy.

Similarly there are obvious disadvantages:  no one to talk to (hence my occasional mundane tweets, “I just did the laundry.” Or “I had a crap day.”); no intimacy (bedtime kisses or cuddles unless you pay for them… Get your mind out of the gutter – I mean massages and the like!); and no one to share household chores (only you can take out the garbage, or do the laundry or cook dinner and clean up after). 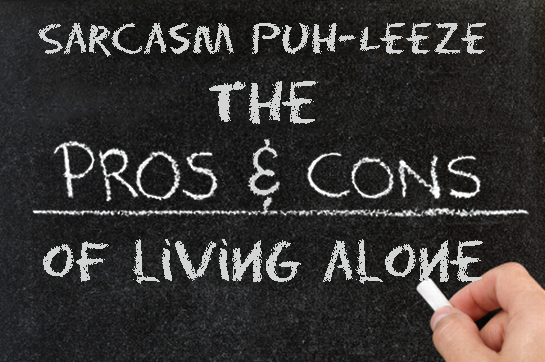 So rather than deal with the obvious (or host a pity party), I thought I’d share with you some of the more unexpected and practical issues we single-person households experience:

1. Dressing (Contortionism 101)
In the movies or on TV the female saunters up to the male and turns her back as he seductively zips up her dress. (Though I suspect in real life it’s more of a “Bloody zip me up, will ya?” kind of scenario.)

In a single person household, difficult zippers (or things that tie at the back) are a no-no, unless you have excellent flexibility or moonlight as a contortionist.

Additionally, donning a bracelet (which requires clipping up) is a friggin’ nightmare. I’ve had many bracelets which have wallowed in jewelry boxes because I cannot do it up one-handed. And yes… I must confess that (on a few occasions) I’ve asked another bus-commuter to do up my bracelet for me. Or I’ve waited until I’ve gotten to work to make the request of a colleague. Tres professional. That’s me!

Oh, and for the record, some necklaces are equally problematic.

2. In sickness and health
Well, actually just sickness. Bridget Jones often joked about dying alone and being eaten by Alsatians. There’s that stereotype of the old spinster and her cats and I suspect I could conjour up visions of cats crawling over her long-dead body. Blech!

But on a lesser scale, not having anyone around when you’re sick can be incredibly depressing. My worst experience was over a decade ago when I had dengue fever after an overseas visit. I felt like crap. I couldn’t do anything. After dragging myself to and from the doctor I existed on chocolate biscuits, diet coke and wine (I suspect) for a week or so, until I was well enough to get out of bed and order takeaway.

And recently, I’ve had a cyst cut out of my back. No biggie I thought, but it was damned sore (plus when I went to get the stitches out I discovered it’d become infected. No wonder it bloody hurt so much). Trying to bathe and wash my hair etc while not getting my upper back wet was a friggin’ nightmare. Not to mention trying to keep the dressing on a spot that I could not possibly reach with either arm.

And this past week I had day surgery. Again, just a minor thing. I fibbed to the doctors about having someone at home to look after me (post-general anaesthetic) BUT hid a key outside and left a packed bag and note inside my front door lest something happen and I get kept in hospital. That way I could call someone and ask them to pick up my overnight bag for me!

3. Hold it steady!
I’m very independent. One has to be – having lived alone (essentially) for the last 21 years. I hate asking for help. I’m bad at asking for help. I don’t even consult manuals before I try to program my TV or iPhone and the like (although I do occasionally tweet for help when I *ahem* accidentally upgrade my iPhone’s software and lose everything!!!).

So I can be ridiculously independent. But… there are certain times when someone lurking nearby could be a good thing. Many a time have I balanced precariously on a ladder or stool or the edge of the toilet to change a lightbulb, or clean an airconditioner. Once in fact I manoeuvred a ladder to the curved landing of my stairwell to hang a wall hanging. It did occur to me that I was glad I had no Alsatians or cats…. just in case I toppled and wasn’t found for a while!

4. Mattress tossing (or turning)
Even though it’s still winter here in Oz I decided last weekend to rid my bed of its flannelette sheets and don one of my cooler sets.  As I was remaking the bed it occurred to me that my mattress probably needed turning. I’m not sure if it’s an old wives tale, but I inherited the habit from my parents and turn my mattress around and over every so often lest I leave an indelible indent. But… it is seriously not something I can do alone. I’m fine with bed-making and stuffing the doona into its cover, but moving a queen size mattress about solo… tres difficult!

5. Finger pointing
Living alone means there’s no one to blame when stuff goes wrong. We all have selective memory, or some sort of inbuilt defence mechanism which allows us to remain blameless much of the time. “No, I did not leave the key in the front door. YOU must have done it.” Or, “I did not use the last of the toilet paper and not replace the roll. It must have been Jill/Fred/Mary.” Or even the age-old… “No, I did not fart. It was the dog.” (Note to self: perhaps I should get a dog. Just not an Alsatian!)

Sadly I cannot point the finger at anyone. Other than myself! EVERYTHING is my fault.

So there you have it… I’m sure there are heaps more although I’m usually pretty good at coming up with alternatives. (Though I’m yet to work out how to wash my verandah without having to ask a passer-by / complete stranger if they can attempt to toss my hose up to me and turn the tap on. *Sigh*

I’m sure there are just as many practical difficulties one encounters when living with others. But I’d surely welcome any solutions to mine!