When we’re kids we just want to be grown up. No matter how messy the lives of the adults around us, they still seem to have it together. Whereas we’re told what to eat, how to act and when to go to bed.

But… once there it’s impossible not to wonder if adulthood’s all it’s cracked up to be. Or worse… is it perhaps some mythical state of being that no one ever really reaches? Like self-actualisation and intuitive eaters! 😉

I’ve always felt more immature than those around me.

I spent much of my mid teens to early twenties in a blur of eating disorder madness. I went to school, university and worked, but food, dieting and my weight occupied my mind for much of the time. There was little headspace for anything else.

I assumed, as a result, I was stunted maturity-wise; and that in my mid twenties I was finally catching up with those a decade younger.

I’d try to imagine ‘settling down’ but it felt like playing house and I just wasn’t ready yet. I was agog when friends started marrying and having kids even though most of my contemporaries didn’t do so until their mid-late twenties.

I really couldn’t imagine it – being in a relationship or living with someone. And kids? It really didn’t seem feasilble. Surely I wasn’t ready for that level of responsibility? I didn’t excel in looking after myself, let alone someone else?!

So… I waited. To become the adult I’d always expected: a domestically competent wife and mother, resplendent with mature and zen-like thoughts about life and shit. 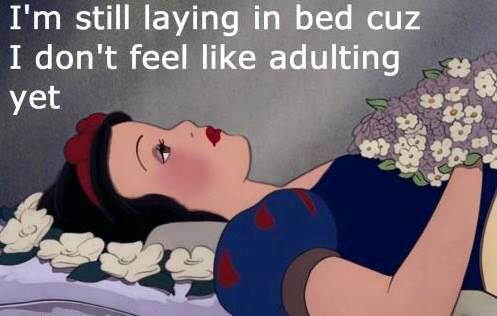 I was in my mid 30s (and back in Oz after living overseas for a while) when I mentioned to some colleagues that I felt I was ready to start dating. They laughed… probably assuming I was joking. They were of a similar age. Almost all were married or in relationships and many had children. But I was serious.

Perhaps I finally had my shit together enough to share my life with someone else.

And yet… I’d been living independently of my parents since I was 17. I’d flatted with others for a few years but (have) lived alone since 1991. I cooked my own meals, signed up for my own mortgages, paid my own bills, took out my own garbage.

And yet… I still compared myself to the adults I’d known; and the phrase, ‘When I grow up…’ has continued to be etched into my brain.

Now in my mid-late 40s (!!!) I sprawl about on the floor eating easter eggs and having twitter conversations with complete strangers. I flop on my bed and sulk for hours at a time. I binge-watch stuff on TV and run out of vegetables and meat. I can’t be arsed unpacking my clothes dryer and just pull stuff out as I need it. I never iron anything. And it occurs to me… MY PARENTS NEVER DID SHIT LIKE THIS.

They had it together, didn’t they? And their friends? I mean, they all seemed so responsible! 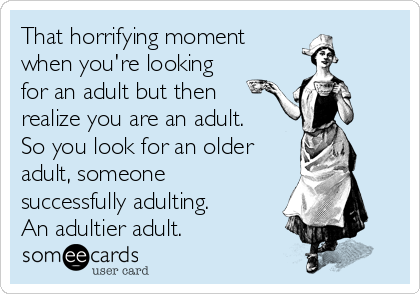 I wanted to relinquish control to a real adult. Someone responsible. Someone adultier. I didn’t feel I could manage. And yet – of course – I did.

And it finally occurred to me… perhaps my parents and their friends were winging it as well. Perhaps they looked at their own parents and wondered when on earth they were going to feel like ‘grown-ups’.

And perhaps the other adults, parents and grandparents out there all feel the same when it comes to adulting? Perhaps they all feel like imposters and they’re just like me… going through the motions.

How are you when it comes to this ‘adulting’ business?
Are you just a kid playing house?