Hello, my name is Deborah and I was once a sun-worshipper.

Of course it was back in the 1980s when skin cancer was barely on anyone’s radar. Like many others around the world, I slathered myself in coconut oil and baked in the sun. Naturally there were painful consequences and I suffered a number of bad sunburns – and I suspect my freckled and blemished skin is a result of those frivolous times! 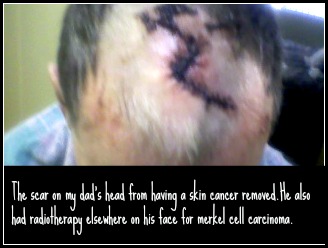 As time’s gone on however, we’ve all heard the “Slip Slop Slap” mantra and know of people whose lives have been impacted by melanoma.

Indeed my own father (though an early adopter of sun-proof clothing and not averse to coating his body in zinc cream) suffered badly in his final years. He had a particularly aggressive sort of skin cancer, which was most likely the cause of his death. (Apologies for gory pic!)

So – the sun and I are no longer friends. Sure I accidentally get burnt from time to time, but I stay away from the sun as much as humanly possible and I have the pale legs to show for it.

I now live by the beach in an apartment complex with a few holiday rentals and we have been besieged by families over the Christmas holidays  – all of whom have enjoyed our pool as well as the beach. But what has shocked the hell out of me is that – even though these families seem like smart and sensible types – many of them take their kids swimming during the hottest part of the day. (And without protective clothing!)

I don’t have kids but most of my friends who do have always been pretty careful about them avoiding the sun and surf around the middle of the day. And even then they often dress them in rashies or sun-resistant swimwear. Which I guess is why I’m so surprised to see families in my pool at midday.

This has particularly struck home in the last couple of days in the case of one family in particular. The dad jumps in the pool with the two toddlers (both are in floaties, so they’re very young) but the mum bakes by the side of the pool. She even removes the straps of her bikini – so keen is she to avoid telltale marks.

Now I realise I sound like a judgemental bitch and perhaps the mother in question is at no risk of skin cancer… but yesterday her little girl got out of the pool and joined her mother on the sunlounges. I watched as she copied her mother’s pose exactly – putting a hat on her face and spreading her arms and legs out to best catch the sun’s rays. It looked odd and frighteningly inappropriate to see a 2-3 year old ‘sunbaking’. She didn’t last long before getting bored and climbing back into the pool, so her mother didn’t notice – but I wonder what would have happened if she had seen her own behaviour so bluntly reflected back at her.

It reminded me of the power of this clip which I saw recently and which is part of an anti-smoking campaign in Thailand.

Are you sunsmart?
Are there things you do you hope your kids don’t do?