One of the biggest changes since my recent move is that I have suddenly become a morning person.

The old me struggled to get out of bed at 8am to make it into the office around 8.30 or 9am. And on non-working days I’d happily remain in bed – unconscious – until 10am or later. Whereas now I’m usually awake at 6 or 6.30am.

There are a number of contributing factors.

You may recall I am a chronic insomniac. I spend months being awake until 2am or later – my mind buzzing with all sorts of important things. I’d tried everything – going to bed earlier, going to bed later, warm baths before bedtime, lavender, meditation and four different phone Apps supposedly aimed at helping me get to sleep. Nothing worked. 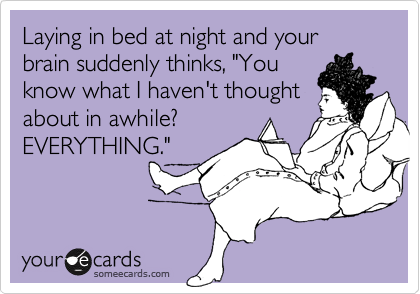 Because I’m also pre-menopausal and had some hot sweats at night (and the like) my GP finally gave me some sleeping tablets – something I’d shied away from in the past.

She reassured me they weren’t going to leave me with a hangover the next day, and recommended I only take them when needed (so ONLY the 2-3 nights before I work was my decision). And I was surprised to find they help(ed). I find myself finally understanding what it must be like to go to bed and go to sleep. Rather than factoring in 4-5 hours of tossing and turning.

Now that food’s not playing such a big part in my life my nights are also very different and I’m ready for bed much earlier than in the past – almost too early on some occasions.

Obviously the stress of my old apartment complex and my frustrations there are also behind me. I know I’ll have other things plague me from time to time, but that’s all a huge weight off my shoulders.

And my new bedroom is light and airy. It has heavy curtains but it’s still really bright first thing and I suspect that’s helping me wake and feel vaguely human. Plus… there are birds and other wildlife about. In my apartment complex it was other people or the cleaners who – more often than not – woke me. Now there’s silence. And birds.

At the moment I’m using the extra hour or two in the morning to do bloggy stuff – write blog posts, catch up on those written by others and so forth. It’s amazing as it means I can head to work at 8am (already) feeling a sense of accomplishment and productivity.

I’m eventually hoping I might become someone who exercises first thing in the morning. I’m not quite there yet – in terms of motivation or commitment – but you never know. If I can keep my early mornings up I might well start walking on the beach, particularly as summer approaches. It will require a short drive to get there and shower when arriving home AND will cut into my blogging time, but is probably equally important to my physical and mental health, so something I need to work on.

Are you a morning person? Any hints to get myself to exercise? Or is it enough that I’m spending this time at my desk, and my beautiful ocean vista?

I’m linking up with the lovely Denyse Whelan today whose topic is ‘Daylight Saving’. I’ve strayed away from that a little, but – incidentally – I’d love to have it here in Queensland.