I was at an informal body corporate meeting for my apartment complex yesterday afternoon and we were discussing a report we’re planning to have done to forecast major expenditure over the next 10-15 years.

And yes, that sentence bored me to death as well. What surprised me however, was the reaction of a few people around the table.

Someone commented on the fact our apartment building is 10 years old and has just had its first repaint.

“Oh well, I won’t be around next time,” one of the men at the table said.

I looked at him quizzically. I’m the one whose apartment is on the market. I didn’t know he had plans to move.

There was a nervous titter around the table.

“Me too most likely,” said someone else.

I should mention at this point that my seachange town is popular with retirees and my complex reflects that fact. Of the owner/occupiers and long-term residents only a couple of us still work. Most of those around the table were over 65. 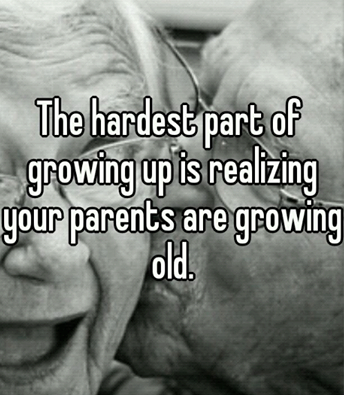 The guy who spoke up first had actually gone on to say that he feels crap now and he’d hate to have to last another 10 years. I’d actually assumed him only to be in his 60s, so was surprised even though I know his health isn’t the best.

I thought of my own mother as we often have similar conversations. She’s adamant she doesn’t want to get old and sick. I often challenge her and suggest she could make 90yrs of age and still be healthy. But no, she doesn’t think it will be the case.

(Understandably) regular contact with some of my best friends was impacted by my seachange nearly four years ago, so I’m closer to my mother than I’ve ever been. I’m sure regular readers of this blog and anyone who follows me on social media realises that. I used to think it was a bit naff or pathetic when adults were ‘too’ close to their parents or co-dependent in any way.

I moved to a town near my childhood home-town during my seachange. My father had recently died and I had – a year or so before – become resolved to the fact I wasn’t going to have children of my own.

My mother and I don’t live in each other’s pockets but I speak to her every day and see her every week. And of late (while my living situation’s been annoying me) I’ve been staying with her a few nights each week.

Since yesterday’s meeting I’ve been pondering what I’ll be doing in 10 years time. I hope my mother is still around as I cannot imagine my life without her. (Sorry mum!) Of course, I like to think I’ll have my shit together by then, but given my track record, it’s unlikely.

I am – of course – assuming I’m still around.

What do you think you’ll be doing ten years from now?