I’ve written a few times about my newfound love of trying previous-undiscovered recipes. I find myself tagging all sorts of dishes on the Weight Watchers site, in the hope I’ll eventually do some grocery shopping and have the necessary ingredients to try something new. 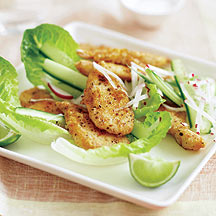 My Facebook followers will know that I have a faithful fallback. Indeed, it was included in a chicken-related Wordless Wednesday post a month or so ago.

However… I talk about it so much that I often get asked for the specifics. So… compliments of (but unbeknown to) Weight Watchers Australia here’s the Crispy Salt and Pepper Chicken recipe.

540g chicken breast sliced thinly (I actually use stirfry chicken breast which I buy pre-cut cos I hate cutting up meat. Hence the interesting shapes below!)
1 tbsp fish sauce
1/4 cup arrowroot flour. I don’t know what that is so I use cornflour (#meh)
1/2 tsp chilli powder
1 tsp McCormick Cajun Seasoning mix & 1/2 tsp garlic powder (I also throw in some paprika and sometimes cumin. Just cos.)
Salt & Pepper to season.
blech! blech! blech! #meh

1. Pour the fish sauce over the chicken and stir.
2. In separate bowl mix: flour, seasonings, salt and pepper. 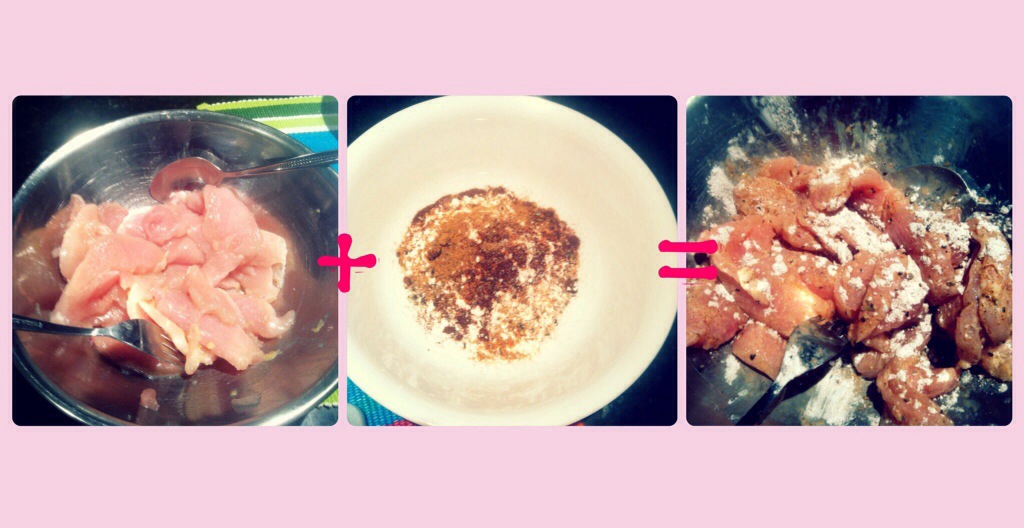 3. Either: dip each bit of chicken in the seasoning mix to coat; or (as I do) throw the mix on top of the chicken (a bit at a time) and stir through.
4. Place the coated chicken on a baking tray (I also use baking paper to save washing up!).
5. Spray with oil / non-stick spray stuff.
6. Place in the oven for about 15 minutes or until golden. 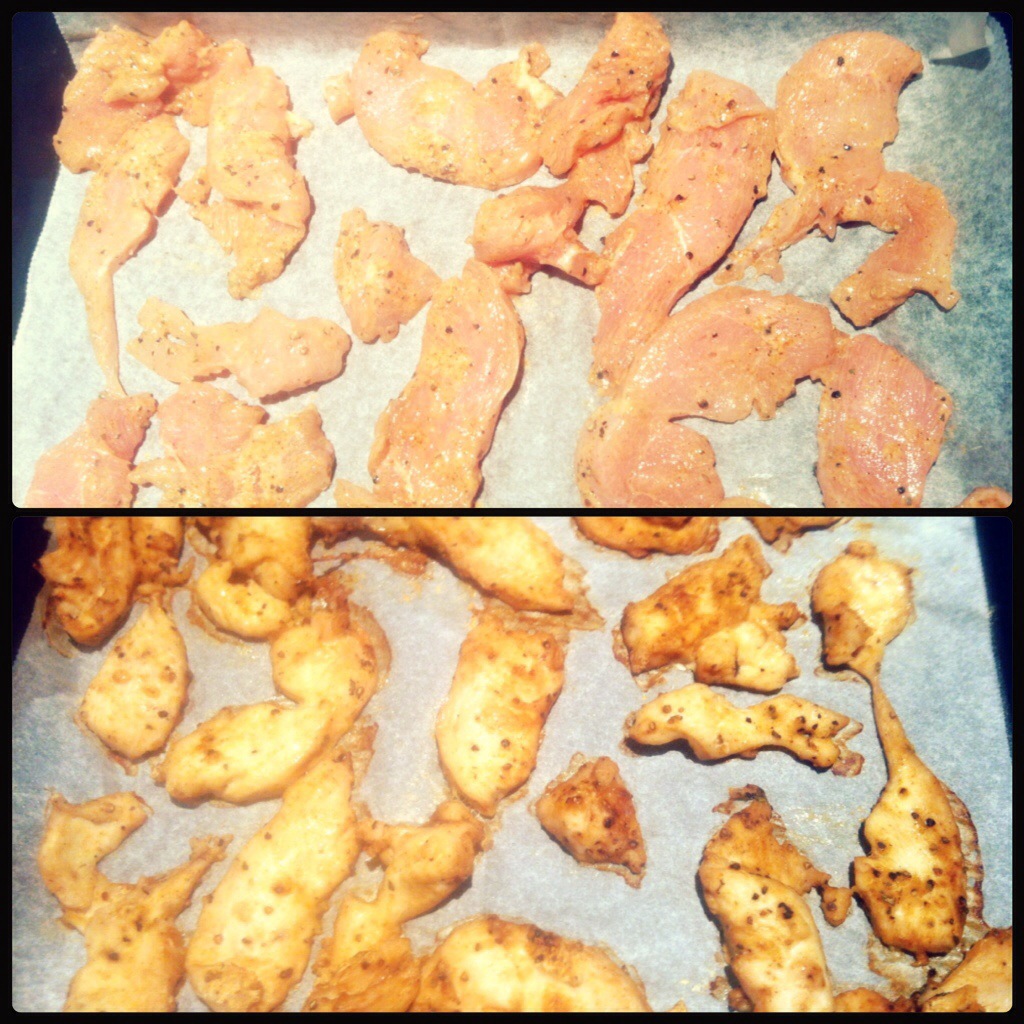 As you can see, the official WW recipe suggests serving it with avocado, lettuce and cucumber, none of which I eat for obvious reasons (ie. green AND healthy) but – although it’s not necessary I sometimes make a dipping sauce sour cream and mustard (which I use as my fake hollandaise / horseradish-ish sauce).

I also sometimes make faux chips (zap chopped potato in the microwave until nearly cooked and place on tray and spray with oil), but it’d be nice with rice as well. 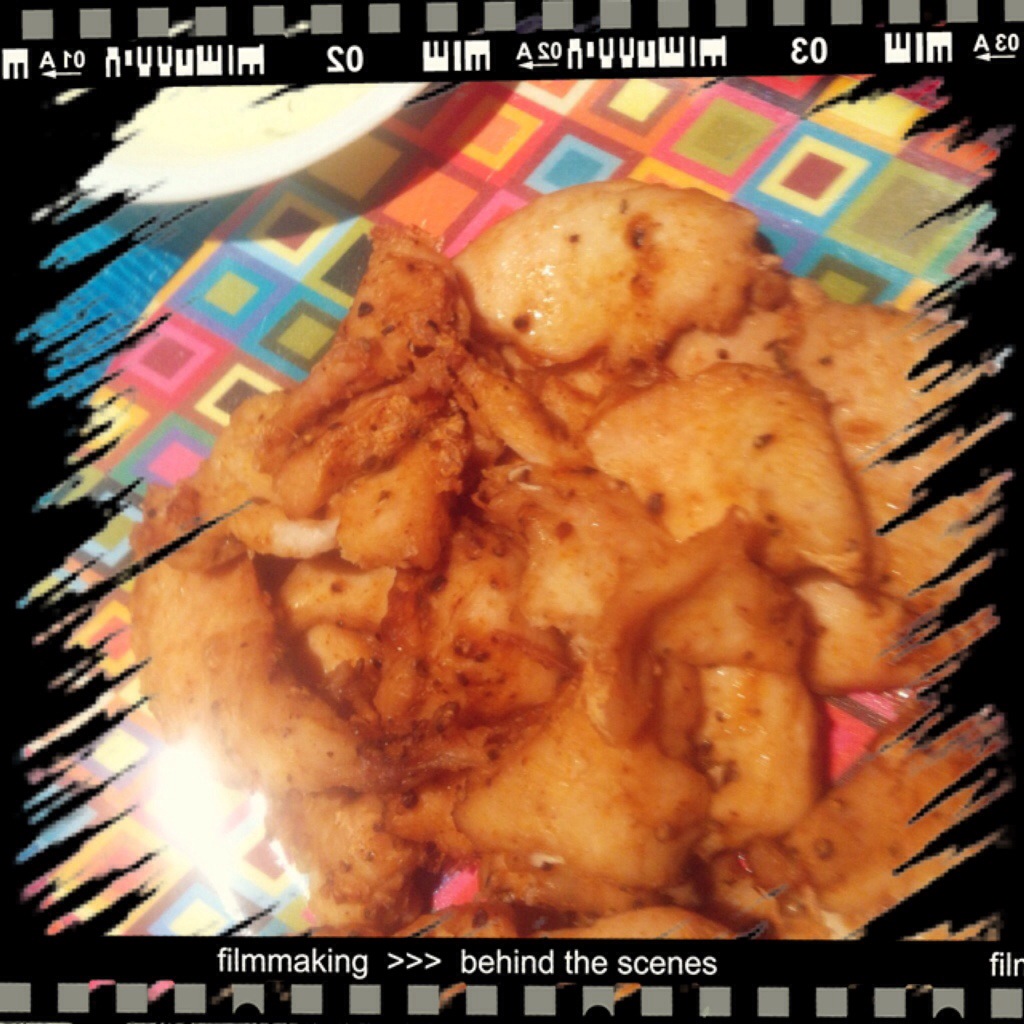 So there you have it. It’s not rocket science. Indeed, it’s now on my menu 2, sometimes 3 nights a week. As I said, it’s my go-to recipe as I usually forget to take stuff out of the freezer or (more commonly) I spend longer in the bath than planned and when I finally head to the kitchen after 8pm it’s too late to start cooking something which involves a lot of preparation.

On top of that it’s yummy and the kind of food I love – one that takes a while to eat and one that involves a lot of plate to mouth movements!

Disclaimer: I have received a free six-month online membership to Weight Watchers, however all of the thoughts and opinions here are my own (as is the crispy salt and pepper chicken addiction!) 😉