I was struggling for a post topic yesterday, and procrastinated by going through all of the blogs I follow. I follow A LOT of others’ blogs (both dieting / health-related and others) and as I find it hard to read them every day, a couple of times a week I allocate a few hours to go through them all (and yes, it does take me that long). I know I should subscribe to them and use Google reader to access new posts in a more efficient way, but although I say that, I don’t quite know what that means! So – on weekends and on an occasion or two during the week – I click through the myriad of blogs-I-love and read through my virtual friends’ latest offerings.

Often something that someone else writes resonates with me and I find myself pondering on it long after I’ve put my iMac to sleep. Yesterday it happened after reading a post by Bee Fit about setting and sticking to, goals.

Colleen’s post asks us if we’ve recently set ourselves a goal which we don’t think we will reach. She talks about her own goals (she’s lost a heap of weight and is about to run a marathon) and the doubt that came from others, and herself. In some ways it’s a bit of a variation of the JUST FUCKING DO IT theme. Colleen tells us not to doubt ourselves, but to keep working towards our goals. Just do it (keep plodding along). 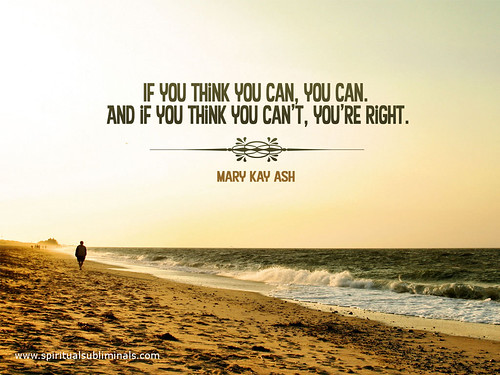 I have to admit that significant weight loss is a goal I don’t believe I’ll ever achieve. I mean, I know I can lose weight. I’ve done it before – though more easily once upon a time than in recent years. But – even though I’ve lost over 20kg on a number of occasions (only to gain that and more back) I’ve never actually reached my ‘goal’ weight. Even in my early 20s, when I first started gaining weight. I went to Weight Watchers at the time (mid-late 1990). Back then I thought I was huge (I started at about 87kg – which I’d kill to be now). I think my goal weight was 70kg but I was stoked when I got down to 75kg. As has often been the case for me, a change to my circumstances (I finished Uni and got a job in the north of the State) meant that my attempts to reach my goal were literally flung out of the window as I consumed junk food during the entire two-day trip to my new (albeit temporary) hometown. Then, on arrival, I bought chocolate and hot chips. And never looked back.

My ‘official’ ideal weight now is 79kg (obviously one is allowed to be heavier as one ages!) but I keep saying that I’d be happy to get to 90kg. I reached that about nine years ago and got stuck there, depressed I could get no further and eventually succumbed to food to ease the disappointment.

And, the negative self-talking part of me is also thinking that EVEN if I did get there (or close) I probably wouldn’t stay there.

It reminds me of something a personal trainer said to me a couple of years ago. I’d found the trainer in question online and sent a couple of query emails (in my usual passive way) and had a response that she wanted to meet with me before commencing our training. Eek! Not sure what to expect I turned up dressed for a fitness test or the like, but rather, she wanted to chat… about my goals, lifestyle etcetera. I blithely told her that I was trying to lose weight (and told her some of my long dieting history). I can’t recall what I was doing at the time, but am sure I was trying… REALLY HARD.

She asked if I was serious. “Do you really want to lose weight?” What the fuck?! HELLO, LOOK AT ME?!?! What do you think? I possibly thought but replied in a more refrained manner. “Of course!”

Her analogy went something like this: You decide you need to call some distant relative to say hello, and say to yourself. “I MUST call X when I get a chance.” But you’re busy and time passes. The next weekend you say, “God, I really must call X at some point.” The same thing happens the next week. And the next. Over time your commitment to call X wanes and it just becomes something you say when you think of it. “Oh shit, I keep forgetting to call X.” My trainer suggested that I may never really have intended to call X (or lose weight as the case may be) at all. But I keep talking about it. She suggested, that if I had intended to act, then I would have.

Naturally my response was ‘hurrumph’, but the fact that I can still remember the conversation nearly two years later says something.

Sure, I want to lose weight. Well, in reality I just want to be slim/normal and the only way I can do that is by losing weight. But I’m reticent to do the hard work to lose weight. I’m pretty sure that’s normal, or we’d all be lean, mean fighting machines and… well… good at stuff because we’d study harder and do better academically; train more to be better athletes etc. But… many of us don’t put in the hard yards. Whether that’s apathy or laziness in my case I don’t know. But I do wonder if my inability to REALLY visualise myself achieving that goal comes into play.

If I don’t think I’m ever gonna get there, why bother even trying?

Is that part of my problem I wonder? Perhaps. I thought aiming for the 90kg goal (because I’ve been there before in recent-ish years) rather than the seemingly-unattainable 79kg figure was being realistic. But, have my constant failures (in the weight loss arena) impacted on my confidence that I can indeed get there?

I bloody hope not. I’m fitting into clothes I haven’t worn in ages and starting to feel ‘good’ about myself and my body. I’m still struggling with the scales and they aren’t budging much (instead just hovering up and down a kilo or so). I’ve already talked about my self-sabotaging behaviour and the wine I’ve had over recent nights certainly isn’t helping. As usual I don’t have any answers other than to keep plodding along, but wonder if others have solutions to these kind of hurdles….

What do you do IF you don’t believe in your ability to reach your goal?